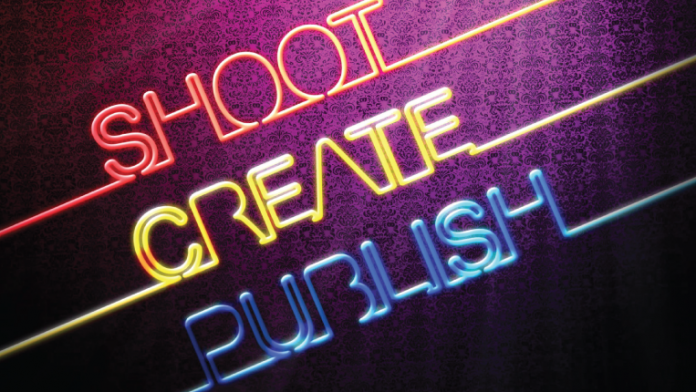 Ever since the beginning of cinema titles, written words often printed on cards and then filmed, have been used to explain and caption motion pictures. In the early, silent days, title cards displayed the dialogue between scenes. Today titles credit people who worked on the film while also helping to set the scene and the mood.

The art of typography is long and storied. Hollywood directors can spend incredible amounts of money hiring the right person to do the titles for their film. One of the most memorable is Kyle Cooper’s title sequence for David Fincher’s grim crime drama “Se7en” (you can find the title sequence on Youtube) which has handwritten titles mixed in with footage, shot by Cooper, of the killer’s diaries. The title sequence was completely scripted and storyboarded before being shot. A number of notebooks were meticulously created, and hand lettered titles were superimposed over the action to give viewers an early glimpse into the villain’s head.[image:magazine_article:56657]

Contrast this with the titles for Stanley Kubrick’s adaptation of the Stephen King novel “The Shining,” which uses extremely simple Helvetica letters scrolling over an opening sequence of a car driving through mountain roads. Why the simple choice? Stanley Kubrick, one of Hollywood’s most notorious control freaks, left absolutely nothing to chance and nothing was done without deliberate purpose. Whereas the opening titles of “Se7vn” look into the mind of a man already gone mad, Kubrick’s titles give a slow sense of an ominous future. No font is more ordinary, more normal and less dangerous than the staid Helvetica. The mountain scenery is beautiful, but Kubrick uses music to give the ordinary titles and the bucolic vista a sense of impending doom.[image:magazine_article:56658]

Written English is more or less made up of 26 letters with a few symbols thrown in to make it a little easier to get our point across. Throughout the course of human history, however, artisans have made significant stylistic variations in what would seem to be a straightforward task — written communication. Typographers and type designers spend their lives trying to figure out how best to add feelings to letters. Look, for example, at the difference between the letters on a STOP sign, and the Coca Cola logo – alien archeologists who land on Earth in a million years may never figure out that they’re both from the same alphabet.

Likewise, moviemakers over the years have invested a terrific amount of time and effort in displaying the titles for their works. Titles that move from bottom to top or top to bottom are known as “rolls” — as though the titles were written on a roll of paper that scrolled up the screen. These are popular in end credits and occasionally in the opening, like the famous rolling introductions to all the “Star Wars” movies.

Titles that move from side to side are known as “crawls” — as though a bug were crawling across the bottom of the screen. Crawls are used when you don’t want to take up too much space on the screen. They’re commonly seen on TV news shows, displaying breaking headlines in a way that won’t interrupt the show that’s going on.

With movie title sequences, there usually isn’t a right and wrong approach. Rather, different choices are made simply  to match the mood of the movie.

Graphics are often displayed at the beginning and end of videos, both two dimensional and simulated three dimensional (like the 20th century fox logo) in both static and animated forms, and are often used to identify the production company. Sometimes the entire title sequence may be animated, like the “Pink Panther” movies, or Hitchcock’s “North by Northwest.”

Titles can be small and unobtrusive, fade or cut in, appear overtop of moving images or be displayed on a field of color — usually black or white, but not always. Each decision has an impact on how audiences perceive your work and helps set the stage for their interpretation of what’s to come. Along with your soundtrack, the titles are often the first thing the audience has to clue them in on what they’re about to see. Will it be funny? Scary? Dramatic? Playful?

Most video editing programs have built in titling options, and many have a wide range from simple letters to a series of pre-programmed motion graphics. Inserting them is as simple as typing your own text into a template.[image:magazine_article:56672]

The advantage to using templates is often that they allows you to make a polished, professional looking title sequence with very little effort, speeding up your workflow. More advanced editing programs will allow for more sophisticated titles, but you needn’t limit yourself to your editing application, titles can also be created in programs like Adobe After Effects, Adobe Illustrator or Adobe Photoshop. Using a program like Photoshop or Illustrator can give you significantly more control over what your titles can look like than the built in titling of some editing applications.

Some title sequences are works of art themselves eagerly anticipated by audiences — the James Bond franchise has been figuring out how to make letters look like guns since the 1960s, and they’ve become an important part of the franchise.

In the opening sequence of “From Russia With Love,” titles done in the rather straightforward font News Gothic are projected onto the moving bodies of dancers, adding an element of clever animation to an otherwise ordinary title sequence. This is the work of designer Robert Brownjohn.[image:magazine_article:56671]

Conversely, there are many movies with very low key title sequences. Franco Zeffirelli’s 1990 film adaptation of “Hamlet” starring Mel Gibson as the melancholic Danish prince, for example, used nothing more complicated than unmoving text fading in and out over an establishing shot. Title designer Maurice Binder used the simple, angular font Optima, perhaps most famous as the font used on the Vietnam War Memorial and later, John McCain’s presidential bid. Binder also did the titles for 14 James Bond films, all of which had significantly more complex title sequences.

With movie title sequences, there usually isn’t a right and wrong approach. Rather, different choices are made simply  to match the mood of the movie. There may be multiple right answers. James Bond movies typically start with a high action scene, which fits with a bombastic title sequence, while Zeffirelli’s version of “Hamlet” starts with a funeral — more fitting with the slow gravitas of fading letters.

In picking titles you’ll need to make choices not just about fonts but about backgrounds as well. Would a simple color background fit the story better than a complex, busy one? If your background isn’t a single color — for example, if your letters will be placed over your video — will there be enough contrast so that your letters don’t get lost in the background?

If your fonts are vanishing into your background there are a number of things you can do to make them pop out more — from a different color outline of a few pixels, called a stroke,or a faux three dimensional shadow, called a drop shadow. Find a way to bump up the contrast between the titles and what’s behind them to make them more legible.

Choosing the right font is a job which can be so difficult that people get paid a lot of money to do it. If you’re wearing all the hats in your filmmaking, it’s likely that the job of doing the credits may fall upon you. Let’s look at some ways you might attack this challenge.

Draw attention to your titles at your own peril. While it’s rare a movie is called out for having titles that are too conservative, it’s not unusual for one to have titles that are perceived as too outrageous or dated. Some fonts come in and out of favor rapidly — Chris Costello’s font Papyrus is key example. One week they’re everywhere, the next week people are blogging about how out of touch someone is for still using it. There are some fonts like the aforementioned Helvetica, Garamond, Palantino and the venerable headline font Bodini which have withstood the test of time, and in the future the only criticism they’re liable to incite is that their use lacked ambition.

Find a font that shows the mood of your movie. Usually a comedy can use more casual fonts than a drama, and a period piece can benefit from fonts popular during the time the movie is set. There are a number of websites that offer collections of free or low cost fonts. Some font designers ask for a donation if you use them, while some others simply ask you to send a postcard. Study the title sequences in movies similar to yours. Spend time on YouTube viewing what your peers are doing. What fonts are popular with wedding videographers? What types of transitions are they using? Cuts? Fades?

Your titles are an integral part of your movie. The right titles can set your viewers up for the experience you’d like them to have, the wrong titles can jar them and interrupt your audiences transition from the outside world to the world of your motion picture. Study what similar moviemakers are doing, be mindful of the mood that your titles will create, choose an appropriate font, and above all, have fun.

Sidebar: Where to learn more about movie titles

Typography is a rabbit hole that you can spend the rest of your life studying. There are some very excellent resources on the Internet.

“Forget the Film, Watch the Titles” (watchthetitles.com) is a blog about title sequences in movies and television. It provides links to the designers and design studios that did title sequences as well as an in-depth analysis of the sequences, card by card including interviews with the designers when possible.

Also of note is the Movie Title Stills Collection (annyas.com/screenshots), which, as the title suggests, is a collection of hundreds of movie titles dating back to the silent era. The Movie Titles Stills Collection provides links to the fonts used in the titles and is a great place to start when looking to learn about the typography of titles. It’s also particularly enlightening to see someone use a font well that you hadn’t been able to figure out how to make work before.

Kyle Cassidy is a visual artist with a background in computer science who writes frequently about the intersection of art and technology.