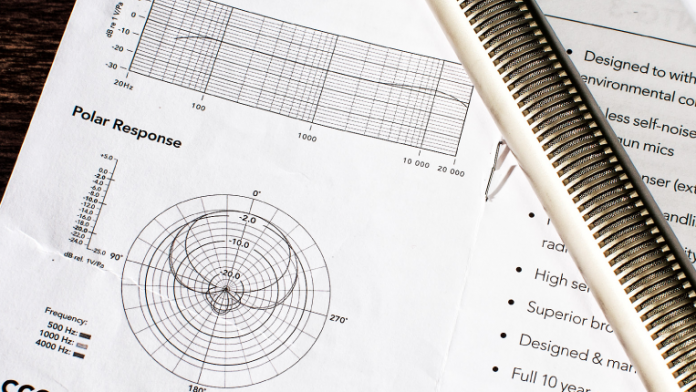 All microphones are not created equal. Some are better at recording distant sounds, some excel at recording the human voice, others do an amazing job of ignoring unwanted background noise. Every shooting situation requires a careful pairing of a mic’s strengths with the challenges the setting presents.

This article will help you make sense of microphone specifications so you can pick the best mic for any situation. Additionally, you will acquire the knowledge needed to make informed purchases.

This process, called transduction, is the conversion of one form of energy to another. Examples of transducers abound in modern life. Solar panels on a roof convert the energy of light to electrical energy. A light emitting diode (LED) converts electrical energy to light.

The first transducer type we’ll explore is the dynamic mic. It is sometimes referred to as a moving coil mic, which is a more descriptive name. Inside the mic, wire twisted into a coil moves within a stationary magnet as sound waves strike the mic.
You may remember from science class that a coil of wire moving within a magnet produces electricity — this is how generators make power. So, dynamic mics actually produce electricity, albeit a very small amount — sadly, not enough to solve any energy shortages!

One problem with dynamic microphones is their size — they cannot be tiny.

Many dynamic mics are of the handheld variety, like the legendary Shure SM58. This $100 mic has been a favorite for live vocal performances since its introduction in the 1960s. Dynamic mics are generally affordable, offering many choices under $250.

One problem with dynamic microphones is their size — they cannot be tiny. If you want to hide a miniscule mic on an actor the next mic transducer we’ll explore is the one to choose.

Condenser mics, sometimes called capacitor mics, can be very small. These are the microphone transducer types found in cellphones and laptop computers. They’re great at capturing quiet sounds or sounds at a distance. How well the speakerphone feature works in a cell phone is testimony to the power of the condenser mic.

A condenser microphone can take the form of handheld studio mic or the tiny one attached to the clothing of a news anchor. The studio variety typically mounts on a stand and can offer high-end audio quality. The cost of a condenser mic varies widely, starting at about $150 and rising into the thousands.

Unlike the dynamic mic, the condenser mic requires external power to operate. The power can come from a mixing board through the mic cable — called phantom power. More often, a battery supplies power to the mic. In the case of the mic in a laptop or cellphone, the power comes from the host device.

At Home in the Studio

The final mic transducer type we’ll explore is the ribbon. Ribbon microphones excel at recording the human voice with warmth and clarity. Historically, ribbon mics have been relegated to studio use because they were expensive and fragile.

Their fragility comes from the uber-thin metallic ribbon inside the mic. This ribbon vibrates when sound reaches it. But, if the sound is too loud, the fragile ribbon will break — not good. A few newer ribbon mics are affordable and even handheld, but most live in a studio. A professional quality ribbon microphone will set you back a minimum of $1000.

No matter what you are recording, there is usually some sound you want to avoid capturing. Say you are shooting a new scene for a situation comedy web series that involves an actor delivering lines on a noisy subway station platform. In this scenario, you want to avoid recording the sounds of other people talking, subway trains and undesirable background noise. Read on for the solution.

The polar pattern of a microphone refers to its ability to accept or reject sounds coming from different directions. Some people call this the “pick up pattern” of a mic — an apt name since it defines what sounds the mic will pick up.

Microphones that ignore sounds from some directions are very common. Dubbed “unidirectional,” they attempt to capture sound from only one direction. These mics — commonly called “cardioid” — have a pickup pattern that loosely resembles the shape of a heart.

A uni-directional mic does a great job of avoiding ear-shattering feedback in a live vocal stage performance. It rejects sounds coming from the speaker system for the audience. The Shure SM58 mentioned earlier is an example of a uni-directional mic.

“Super-cardioid” and “hypercardioid” mics do an even better job of rejecting sounds from the sides of the microphone. These extremely directional mics excel at capturing sound that is a significant distance away — like a bird singing in a far off tree.

For our filmmaker on the subway platform, a super-cardioid mic would be a great solution. This could take the form of a “shotgun” mic — its name derived from its barrel-like appearance. This mic solves the problem: The filmmaker can position it out of range of the camera’s view and in a manner that avoids capturing unwanted sounds.

Other microphones have an “omni-directional” polar pattern. This means that they pick up sound from essentially all directions. A few mics even offer a switch that changes the polar response between uni and omni-directional.
“Bi-directional” mics pick up sound from two directions. These are ideal for an interviewer and interviewee sitting directly across a table from one another. This polar pattern also goes by the name of “figure-eight.”

Most manufacturers publish data on a mic’s frequency response, sensitivity, maximum SPL (sound pressure level), noise and other key specifications. Unfortunately, these specs are only as dependable as the measurement procedures the manufacturer uses — there is no standard. Be especially careful when comparing mics from different manufacturers.

A microphone’s frequency response specification describes its ability to capture sounds throughout a range of frequencies. For example, human speech typically ranges from around 125 to about 6,000 cycles per second — measured in Hertz (Hz). Most mics capture the majority of the approximately 20 to 20,000 Hz range of human hearing. Nonetheless, the unique personality of a particular mic might make it better suited for recording a snare drum rather than a saxophone.

The sensitivity specification of a mic defines its ability to capture quiet sounds. Typically, the condenser mic has the greatest sensitivity, making it the only choice for the speakerphone in your smartphone — so there’s no need to yell into it, hint, hint. Dynamic mics typically come in second, with ribbon mics relegated to last place in transducer sensitivity.

A microphone’s SPL numbers describe its ability to record loud sounds. The noise numbers depict the hiss and other unwanted noises the mic adds to the audio signal — lower numbers are better.

Professionals use low impedance mics with XLR connectors. These cables offer good protection from picking up unwanted electrical noise — like the electric drill in a neighboring room. XLR cables also allow the flow of phantom power to a condenser microphone. Avoid high impedance mics that typically have 1/4-inch or 1/8-inch connections, especially if the cable has a long run.

The best advice is — if possible — try before you buy. The only way to truly know if a mic will work in a given situation is to actually give it a go.

Thunder and lightning illustrate the fact that sound travels relatively slowly. You see a distant lightning flash several seconds before you hear the sound of the thunder clap. Sound’s sluggish movement creates headaches for audio engineers.
For example, if a mic is too far from the source of the sound in a large room, the microphone will pick up the sound as it reflects off the walls, floor and ceiling. This phenomenon results in sound reaching the mic at slightly different times — creating an unpleasant muddled effect.

The solution is to always place the mic as close as possible to the source of the sound. This minimizes the effect of sounds that bounce around and reach the microphone later.