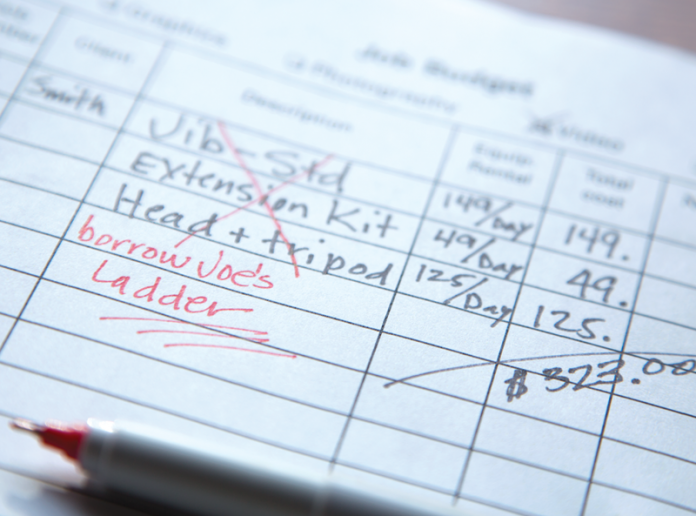 “You can make a great movie for $50,000 or $50,000,000, but it's hard to make a great movie for $2,000,000,” a movie editor once told me. It was Hollywood bar talk, but what he was saying rang true. The history of cinema is filled with unforgettable movies made with budgets you could run cities off of, and it's also got its fair share of incredible films made on a shoestring, but somewhere in the middle it seems… there be dragons.

Personally, I have some sort of gear acquisition disease. Every time I see a new piece of equipment, I suddenly realized that my work can't possibly be completed without it. All the solutions in my head revolve around this item, whether it's a boom, a lens or a quad-copter mounted camera. This is the easy way out of problems in movie making; the hard way is to make it work with what you have.

The time to plan your shoot is long before the cast and crew appear. Major movies often begin pre-production years before an actor steps in front of a camera. Figure it out beforehand on your own time; it's cheaper.

Most movies are made or lost in pre-production. This is the time when few people are on the payroll and time is, more or less, leisurely. You can afford long-winded discussions about character motivations, or camera angles. When your cast and crew are standing around on the set waiting for you, things become exponentially more expensive and time is a luxury you can no longer afford.

Poet Samuel Taylor Coleridge said that if a writer, and by extension, a filmmaker, could impart within their tale “human interest and a semblance of truth” then no matter how outrageous the tale you were about to tell, the audience will respond with a “willing suspension of disbelief” – if your story is good, your audience will gladly ignore missing special effects.

Every second you're not working is a second you're wasting money. This is one reason that movies are shot out of sequence, producers and directors want to minimize the amount of time actors are being paid, so they spend a lot of time figuring out the order to shoot things in in order to get all the shooting done in the least amount of time.

Carefully plan out your shoots way in advance – who needs to be on location? How long will the shoot take? What permissions will you need? What food, transportation and equipment is needed? Have your shot list planned way in advance too. What actors have shots together? Who has the fewest shots? Can you let actors leave at staggered times throughout the day? Though it sometimes happens, it's bad form to keep an actor around all day so they can shoot one scene at the very end. If you're working with part time cast and crew members it's also very likely that they'll have obligations you'll need to work around. Soccer practice? Dental appointments? Find this out and get commitments from your actors.

The time to plan your shoot is long before the cast and crew appear.

When everyone arrives on set, you should know the order of the shots you're doing, who's needed for them as well as what equipment and props need to be there. The director, the lighting designer and the director of photography (sometimes the same person) need to know ahead of time what camera angles they'd like to use, how they plan to light a scene and, realistically, how long it should take to do.

Don't plan for things you can't do. If you don't have a crane, don't have your script dependent on a crane shot. Don't arrive on set unsure of whether you'll be hand-holding or using a tripod, and don't think you can substitute one for the other. If you need a crane or a camera stabilizer, plan for it ahead of time, but also, always have a backup plan. Think to yourself, “If the crane is destroyed in a plane crash the day it's supposed to be delivered, how will I do this shot?” Your backup plan doesn't have to be perfect, but it does have to exist.

Perfect your script or your idea before you shoot

You'll hear horror stories of Hollywood productions where the actors show up on set and are given script pages written the night before, or even standing around while the script is being written – it happens, it's dreadfully expensive and those are horror stories. Don't be that person. Your script should be finalized before you start shooting. That doesn't mean that your actors can't improvise – some great moments in film history were things done on the fly – but before you let your actors ad-lib, be sure to get what's in the script so that you don't find yourself with a continuity error you need to solve in the editing room.

Hold auditions: find the right talent for the job

MGM scoured the world to find the right person to play the heroine in the film adaptation of Margaret Mitchell's “Gone With the Wind,” every actress of note found themselves auditioning for David O. Selznick, including Bette Davis, Katharine Hepburn and Lucille Ball, and it was with great fanfare that MGM announced a relatively unknown Vivian Leigh. Not all movies have such difficulty finding their leads, but you may be surprised to find out how hard people look: 2,000 actors tried out for the low-budget indy classic “The Blair Witch Project.”

Know your camera going in, plan your settings

If you're renting a camera, be thoroughly familiar with it, as the set isn't the right place to figure out how to adjust the white balance. Read the manual, try everything out, create custom banks of settings for various situations you might frequently encounter – this is especially true for documentarys, weddings and filmmakers who may find themselves under fluorescent lighting one minute, and in bright sunlight the next, it's also possible that in some situations automatic exposure will let you concentrate on getting the action – try it out beforehand though and be sure you understand the limits of your camera’s capabilities to make exposure decisions. Shooting a flatter image (less contrast) will give you more control in post production. It's easier to brighten slightly dark footage than it is to darken overexposed footage.

It's possible to have a hit movie that's beautiful to look at and has a mediocre story and it's possible to have a hit movie that's got a great story and looks sloppy, but you're out of luck if you have a poorly shot movie with a clumsy story. So study composition, be careful and deliberate in framing, make every shot count and pre-plan. If you want Shane riding his horse off into the sunset, be sure that the sun is going to set where you need it to, don't show up on the day of the shoot and find out that there's a parking garage in the way. Also, be very aware of your blocking, plan it beforehand, don't rely on your actors to block themselves in the moment – your blocking needs to be consistent so that you can use bits from multiple takes without having people instantly leap from one side of the room to the other.

“Fix it in post” is sometimes used as a euphemism for sloppy directing, but there are some things that need to be taken care of in post. On the set, make sure you're getting the highest quality raw material you can, this will give you the greatest latitude in post.

Does your color correction need tweaking? Make sure that your white balances match from shot to shot as your lighting changes. Also post production is the time to work on your sound – from choosing the proper music, to adding or creating custom effects, it's also an opportunity to re-do and overdub any missed lines of audio.

In 1970, director Melvin Van Peebles wanted to make a movie about an African American man who fights a corrupt police system and wins. None of the studios were interested in it and he set out to make it entirely on his own. This involved consolidating a lot of jobs that are traditionally done by many different people. When all was said and done, Van Peebles wore an incredible number of hats during the creation of “Sweet Sweetback’s Baadasssss Song” and when the movie, shot on a shoestring, became an instant hit he didn't have to divide the profits with anyone.

“I was producer, director, decorator and in charge of casting,” he explains in his 1971 “Guerilla Filmmaking Manifesto.” “Plus, as it later turned out, script supervisor and lead. I had made several demoralizing tries to find a star for ‘Sweetback’… not finding the lead troubled me immensely. I think what I felt was despair and since that was one … thing couldn't afford, I did it myself.” Van Peebles also wrote the score with the help of a then-unknown band called Earth Wind & Fire.

Van Peebles made other cost-cutting measures too, he mixed 35mm film stock with 16mm, which was significantly less expensive — although grainier, the smaller 16mm cameras allowed his camera operators to move more quickly outside and attract less attention. He also used amateur actors, many of whom doubled, or tripled, as crew, cooks or security.

Today Melvin Van Peebles’ bold DIY approach to overcoming obstacles and producing a movie with little but determination often filling in for lacking equipment or budget is lauded by filmmakers such as Spike Lee and Quentin Tarantino as a seminal influence and a game changer in American cinema.