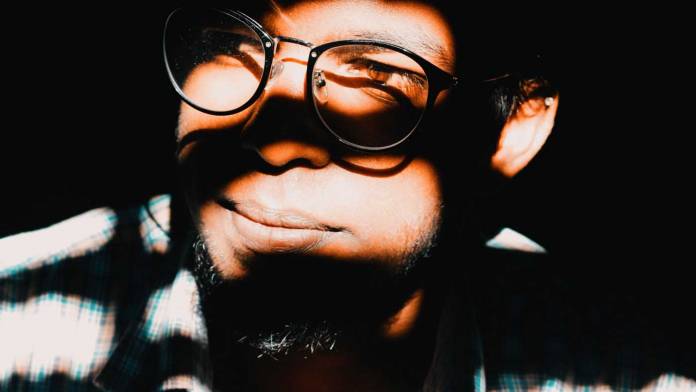 Light is so important to video that there are well paid people who spend their lives doing nothing but figuring out what light to put where in order to create a mood in an image. Doing this can be so complicated that it’s all too easy for an independent video producer doing everything themselves to just plop a couple of softboxes on a set and call it lit, but very often this is confusing well lit with properly lit.

How Light and Shadows Happen

Light comes from a source — like the sun or a lamp — bounces off objects, passes through your camera’s lens and lands on the sensor where its intensity is registered. Bright light registers differently from darker light and all your sensor does is map where that light falls and how strong it is. If all the light has a similar strength, your image is evenly lit, if there are strong fluctuations, your image is contrasty.

Why is light so important?

If you’re in the market for a vacuum cleaner, you’d look online for some photographs and you’d want to know what it looked like from the right and left and you’d want to see all the details. You’d want to know how the cord winds up and where the attachments snap on, in short, you want to see everything. It’s for this reason that product catalogues invariably have products lit flatly, you can see everything, nothing is more prominent than anything else. But we don’t always want that. Often we want to make someone look smart, a place interesting, or even a vacuum cleaner exciting, and for that we look to telling a story with shadows.

Why are shadows just as important as light?

Memorable images are made more by the placement of light than the placement of the camera. Master light and you’ll be well on your way to mastering video. Light reveals important things in your scene and allows your sensor to capture an image, but it tells a story as well. Light can be bright or low, it can have sharp or soft edges, it can be broad, or narrow, all of these tools can help tell your story.

Light can be bright or low, it can have sharp or soft edges, it can be broad, or narrow, all of these tools can help tell your story.

Not all shadows are the same – shadows can be sharp, or they can be soft, they can be natural, or man made, shadows from the sun, for example, can be used as a wordless shortcut to tell the audience that time has passed, that the sun has risen, or that a vampire is in trouble as the sun starts to come up and pushes the shadows away.

Light reveals, and shadows conceal, so you want to use both. Shadows can add mystery, and they can also be used to highlight important details by hiding others.

Master light and you’ll be well on your way to mastering video.

One of the most famous instances of how much light placement matters is the illumination of Daniel Chester French’s statute of Abraham Lincoln in the Lincoln Memorial in Washington DC. French designed his sculpture with a particular lighting style in mind and was horrified by how it looked during its unveiling in 1922 – the overhead skylight he believed would be lighting the statue wasn’t included in the final plans for the memorial, French complained and electric lights were installed, but not at the angles that French dictated, while the statue was brightly lit by well-meaning electricians, it was certainly not properly lit. It took four years for the anxious sculptor to convince authorities to move the lights, but what a dramatic difference. The shadows on Lincoln’s face give him an aura of gravitas whereas lighting coming from beneath a person’s face makes them appear strange and sinister (because we’re used to people being lit by the sun, which is overhead. If we lived on a planet where the sky was black and the ground glowed, we’d probably think just the opposite).

Shadows help give us the perception of the third dimension (which is one reason graphic designers often use “drop shadow,” which is a fake shadow added to a layer of a design to make it look like it’s floating above another layer).

Shadows can be a precursor and an indicator. A shadow along the wall of an alley tells us that someone is approaching, is it a killer or a delivery person? The shadow gives us the opportunity of anticipation and by creating spaces for things to hide, they also create mystery.

In Ridley Scott’s 1977 masterpiece “Alien,” a strange and possibly deadly creature escapes in a spaceship. The crew knows that it’s hiding in the medical lab and they need to find it. The medical lab, though, is filled with shadows and dark places. The alien could be … anywhere. The crew investigates, with flashlights that become additional lighting sources, slowly pushing the shadows back while the tension builds.

While brightly lit, nothing is hidden. Then the same room again in the dark, who knows what’s in the shadows?

Steven Spielberg did something similar in 1976’s “JAWS,” when trying to answer the question, “How do you make finding something mysterious in a place where you can see everything?” The town’s police chief, played by Roy Schieder and a marine biologist played by a 26-year-old Richard Dreyfuss are on the ocean looking for a missing boat. Normally you’d be able to see the boat from a mile away, but Spielberg decides to do the scene at night, where everything is a shadow, and using a giant flashlight to show only one small part of it at a time. The result is one of the most successful suspense scenes in film history.

Hands on: Making light and shadows.

The sharpness of a shadow is controlled by two factors: the size of the light source, and its distance from the subject. A small light source casts sharp shadows and as a light is moved backward it casts sharper shadows. Why? Because it is becoming relatively smaller to the subject. The sun is a large light source, but it’s very far away, so at noon if you step outside, you’ll see it casts razor sharp shadows. Were you to move the sun significantly closer, the shadows would get softer, but you’d have long ago burned up like a forgotten pie. So if you leave the sun where it is and put a bank of clouds 400 miles across, your light source stops being the sun and starts being the overcast sky. The overcast sky casts very soft shadows, because your light source is much closer to you and appears larger. So you’re getting light from the left, from the right, from the front, from the back. This is the exact principle of the softbox. You take a very small light source and you put it behind a large sheet of fabric. Your light source turns from 1 inch of heated wire to 3×5 feet of illuminated fabric, resulting in soft light.

When lighting your scene, try using a mixture of soft and sharp shadows. One thing I like to do is start with total blackness, that way you know where all the light is coming from and you have control over it, then add lights one at a time. Instead of using a softbox as your main light source, consider using it as a fill and using some more directional lights as your keys.

Grids and snoots are light modifiers that throw narrow beams of light – you can get (or make) them in dimensions that will throw broader or more narrow beams. You can also put a grid on a softbox to make it directional. The smaller the softbox, the more directional it will be.

Also, don’t be afraid to try using practicals, which are existing lights – if there’s a lamp in the living room and you turn it on, that’s called a “practical,” it produces light that, while it might not be beautiful, is familiar and doesn’t call attention to itself.

Film Noir is deeply associated with the use of shadows to tell stories, partly because shadows are easier to create than sets.

With some modest light modifiers, a good lighting designer can carve out places in a room to create mood and drive the story. 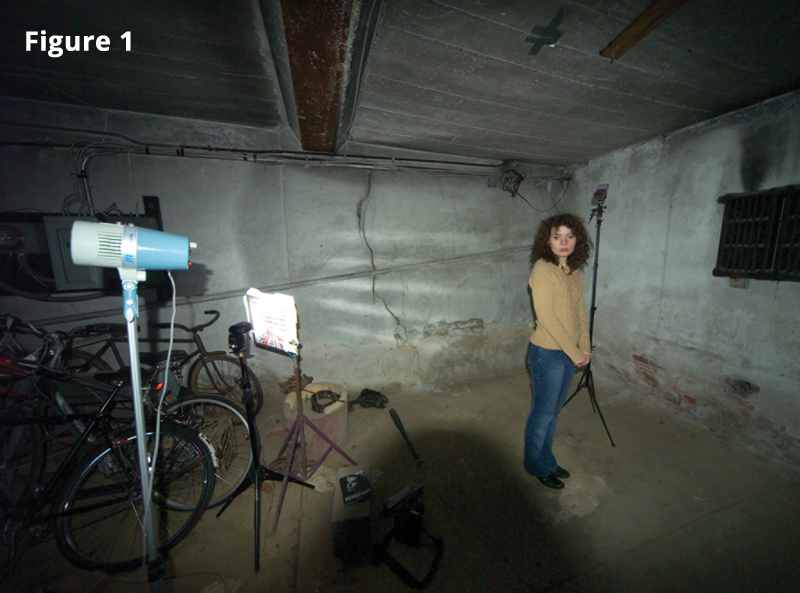 A brightly lit and rather ordinary garage isn’t a terribly compelling set, but very often it’s what you have to work with. 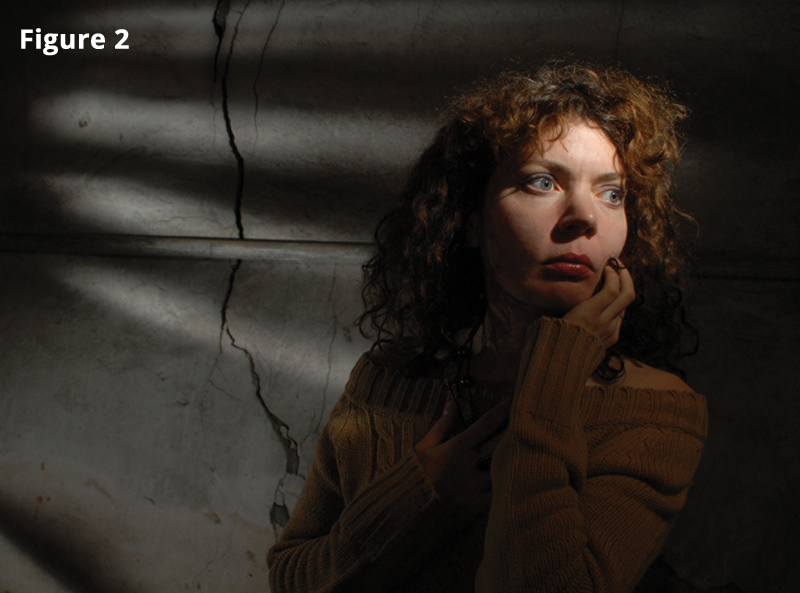 But take away all of the light and bring in selective lights, such as a tightly controlled beam on the heroine, using a hard light and a snoot to limit the light’s fall-off and she’s becomes an  isolated point in a mysterious, black room. Add a second light going through a “cookie” (in this case, a pizza box lid with slits cut in it). By illuminating the wall behind her, with some things illuminated and others hidden in what seems like an intricate pattern of shadows, it makes a much more visually interesting frame. Filling all the space in your frame with light removes all of the questions from your shot, adding some shadows engages the viewer and adds mystery to your scene. 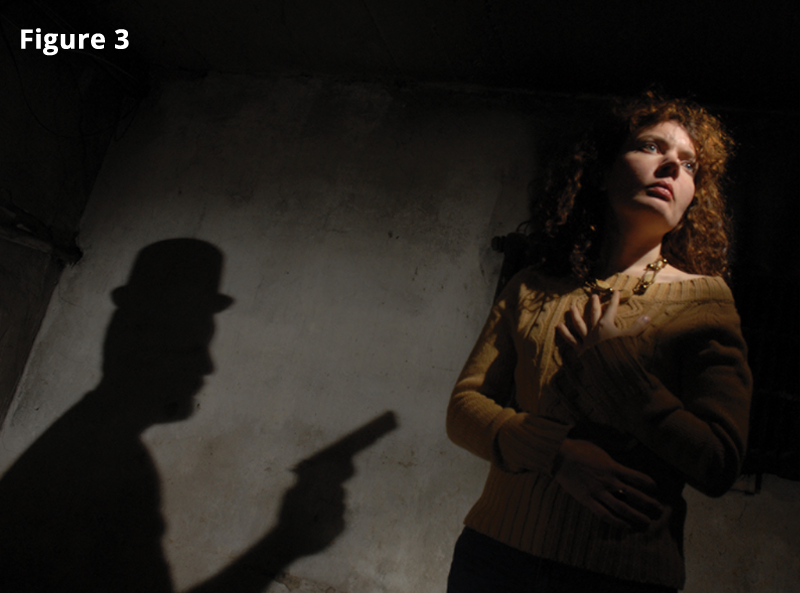 Take away the cookie and put a person in front of the light and we can tell a different story with shadows. Does our heroine know what’s lurking behind her? Is it a helpful detective or a vengeful assassin? The shadows only tell us so much, engaging your audience to attempt to guess the rest.

Thinking that everything should be brightly and evenly lit is a common, amature mistake. Pros know that shadows add depth, mystery and reality to a scene. Pros will also use shadows to direct a viewer’s eye and give them clues about the passage of time and the weather as well as a myriad of other things. Your homework for this month is two-fold:

Find some great examples of the use of shadows? Let us know about it on the Videomaker forums.