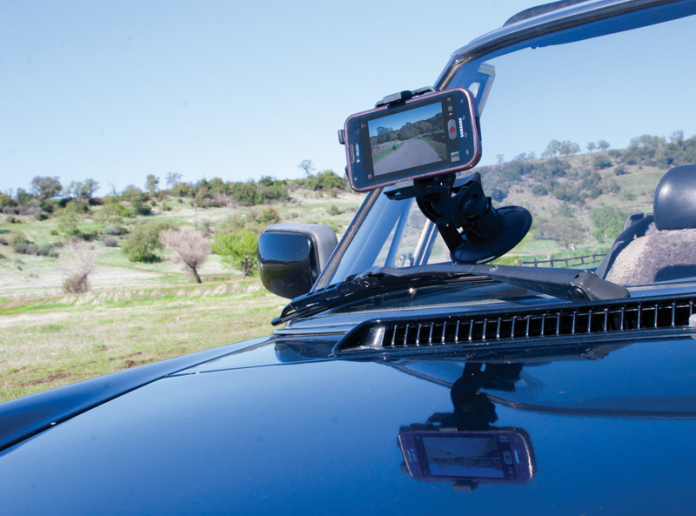 GoPro burst onto the scene with a very basic, high-definition, low cost, lightweight, extremely portable and rugged camera in a waterproof case whose most enticing feature was how easy it was to connect to things. These cameras allowed people to get camera angles heretofore unheard of. Surfers attached them to the ends of their surfboards, hang gliders to wingsuit pilots, and sky divers attached them to their helmets and leapt from great heights. People have attached them to dogs, to windows with suction cups, to fishing lures and to bunches of balloons to lift them into the air for inexpensive aerial shots – in short, they've revolutionized what people make videos of and how they're able to make videos. Click here to check out this Videomaker test footage of the GoPro HERO3: Black Edition.

Ok, that sounds cool, but I'm not going to buy one.

I'd love to have a couple of POV cameras to put on the ends of sticks for overhead shots or to clamp to the side of my bike occasionally, but not nearly enough to justify actually buying one. I do, however, have a cell phone that shares some of the characteristics of a GoPro. It's small, battery powered and shoots HD video. In most ways the inner workings of your cell phone's camera is similar to a POV (point-of-view) camera, and it also has some extra features that POV cameras don't normally have. Out of the box your phone camera probably lacks the easy mounting apparatus that GoPro and other POV cameras have and it lacks the waterproof housing. But it also includes something a GoPro doesn't – like a viewfinder and the ability to add apps that change the way it functions. Your phone probably has a GPS built into it that will let you locate it should you attach it to a balloon and let it fly up into the sky. While a GoPro is a no-frills camera, your phone is a fancy, tiny, miniature computer.

Why do I want a POV camera?

POV cameras can go places that other cameras can't easily go. Think of it as an option for an extra angle that you can't get with your heavy camcorder or DSLR.

For more on creative uses of POV cameras, check out Videomaker’s list of 5 favorite GoPro videos that aren’t action sports – in particular, someone mounted a camera on a jump rope!

Just because you CAN doesn't mean you SHOULD

You could put your cell phone in a waterproof housing, tie it to a chunk of horse meat and let a shark eat it. If you got your camera back the resulting video would probably get a lot of YouTube hits but your phone could get permanently damaged. One of the advantages of a small POV camera is that they're inexpensive and you don't need them to do things like telephone home to get a bigger boat. Be sure to weigh the risks of putting your camera in harm’s way against the advantages of getting your footage. For those of you who do put your gear in harm’s way or rely on it for a living, check out this Videomaker article on insurance for film & video.

Bring your old phone and bring all your friends’ old phones

Your old cell phone, the one that isn't connected to your cellular service anymore, that's in your bureau drawer with all your nail clippers? The one with the smashed screen? Don't forget that one; it still takes video, so charge it up. And ask your friends if they have unused cell phones they'll let you use for dangerous video experiments. Then, be sure to check out this Videomaker article on shooting with a smartphone.

There are a number of companies that make devices for mounting your cell phone to things. Miveu, for example, makes a chest mount so that you can strap your cell phone on while bungee jumping or parkour. Their case includes a wider-angle lens for getting more of the action.

While a GoPro is a no-frills camera, your phone is a fancy, tiny, miniature computer.

Your local hardware store is your friend here. Duct tape, clamps, bungee cords, suction cups and string can all be used to attach your smartphone to different things. There are also a number of cases that provide a standard quarter-inch tripod mount to the phone which will allow you to attach it in more traditional ways. If you’re excited by the idea of doing it yourself, check out this Videomaker article on DIY accessories for video.

Luckily lots of people take their cell phone into dangerous places so there's a big market for things to keep them safe. Sometimes all you need is a mount to get your camera where you want it to be, but other times you need something protecting your camera as well.

There are companies that make extreme cases for your super crazy active lifestyle, like G-form's G90 case. They're so sure of how indestructible it is they put an iPad in one, attached it to a weather balloon, sent it 100,000 feet into the air where the balloon popped, and the iPad free fell back to Earth where it smacked into the desert and continued to work. The G90 was announced January of 2013 but has been slow in coming to production.

A number of companies, like Optrix and OtterBox, make waterproof housings for cell phone with mounting apparatus which allow for easy attachment to a surfboard or the side of your boat. These usually fall into three categories, “splash proof” and more rugged ones for sports, which can be submerged in about six feet of water for an hour and professional models for diving that can survive depths down to a hundred feet.

Creators of the Velocity Clip took their idea of a smartphone mount with four options; adhesive, bike, chest and head, to the crowdfunding website Kickstarter to successfully launch their product. One of the other nifty things about it is that it's not sized to a particular smartphone and will also work with a number of compact cameras.

Your homework, should you choose to accept it, is to shoot some video footage using your cell phone that takes advantage of it's small size. You don't need to get a special case for it, but at least try some creative DIY mountings. If you tape it somewhere, be prepared to spend some time wiping adhesive off of it; we suggest popping for the extra cash for a good roll of gaffer's tape. Try some low or high camera angles, or try mounting it some place where you can't fit your camcorder. If you get something cool, post it in the Videomaker forums!