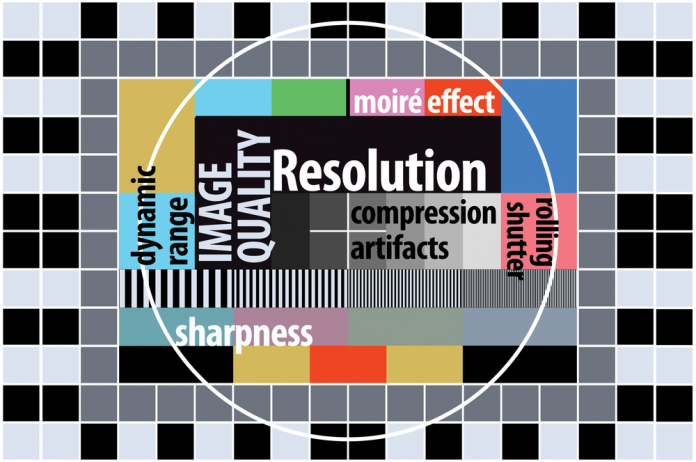 In the world of digital media and consumer electronics, image resolution is one of the things most talked about.

After the process of capturing an image was invented in the 1800s people knew immediately that they wanted to marry this technology with the other big invention of the time, the telegraph. The value of photography is that it can show you things you're not looking at right now, or have never seen before. One of it's greatest uses is to show you things that are happening far away as quickly as possible; all of us won’t fit in Times Square on New Years eve, but we can all watch it on television at the same time.

Before video resolution there was single frame resolution. The first images sent over wire were in the mid-1800s, mere years after Louis Daguerre gave photography to the world. Alexander Bain used synchronized pendulums to scan and transmit images from one location to another. And from that day until now it's all been about speed and resolution, in this case, video resolution.

High video resolution in digital media is nice. But to quote Macbeth, it's not the “be all and the end all,” there are a number of other factors that go into image quality and in many instances a lower resolution image can actually look better than a higher resolution one. What? That's crazy talk! But it's true. Resolution is an easy marketing tool for consumer electronics manufacturers and as such it tends to get over-emphasized. Retailers and advertisers are trying to trick you, not because they're bad people, but because these are complicated issues and they're trying to sell cameras and televisions in three inches of copy

“If Joe Consumer walks in off the street and looks at a TV with 720p image resolution and one with 1080p image resolution, their chances of noticing a difference is minimal,” says Frank Macgregor, a video installation expert with 26 years of experience in both high-end and consumer audio and video systems, “They're both very good, one is slightly better and if you took the time to dissect it, you could probably find differences, but assuming they both have good quality content, they're both about the same thing.”

Macgregor advises people to trust their eyes and be wary of advertiser’s claims, and not just regarding image resolution. “A lot of advertising is misleading, because for many things there's no accepted industry standard for measuring things. Unfortunately, some of the lower-end manufacturers are more willing to fabricate or extend the specifications to make the product look better, and some of the better manufacturers that have products that are more expensive tend to be more accurate with their specs. So if you were to buy a TV strictly off a spec sheet you'd almost always buy the wrong one.”

High video resolution in digital media is nice but there are a number of other factors that go into image quality.

Take, for example, contrast; it's one of the biggest contributors to the quality of the picture, and most people who know about digital media know about it. But just as important as contrast is a television’s black level, which is something, according to Macgregor, that most people don't know about. “Contrast makes a picture look crisp, and much more lifelike, that's a quality that people actually enjoy in their TV set but a good black level is the most difficult to achieve within a TV set. Black is the hardest color to create and usually the defining place as to how much contrast the picture has.”

And here's where careful viewing comes in. Many new LED TVs have a bright picture and vivid color that draw people to them when coming into a store but they don't have the best black level. “Many times the LED picture is so bright and vibrant that your eye is drawn to it, and it might look great for that sports event you're watching, but it might not be what you want for the other types of programming that you'll watch 90 percent of the time. Don't exclude or underestimate plasma. Because it's not the newest technology people tend to think it's not as good. The LED TVs are brighter and look flashier, but the plasma TVs often have a much better black level and therefore contrast which results in a much more realistic picture.”

So how do you make an informed decision when looking for something to play back digital media? What should you be looking at apart from image resolution?

People often confuse sharpness with resolution but while the two are related, they're different things. As with all digital media higher resolution images have more data and therefore a higher capacity for appearing sharp but what we call sharpness is actually an issue of transition rather than data. While resolution deals with the number of lines per unit of measure, sharpness deals with the contrast between edges. When you use a sharpening filter on your video (weirdly called an unsharp mask) it doesn't actually make the image sharper, but it increases the contrast in areas in between bright and dark which serves to make lines look straighter by getting rid of middle-shaded areas, this makes the transition more abrupt.

This is different from contrast. Dynamic range is the number of gradations between black and white your camera can capture or your television can display. Contrast is the clumping of gradations.

Higher contrast means more dark values are pushed to black, more light ones to white, the ultimate high-contrast image has only black and white. If your camera has a good dynamic range, you can adjust the contrast to suit your needs by using a filter in post (this is what cameras that shoot RAW do). If your camera has less dynamic range, you're more often stuck with what you shot. Television companies have come up with a myriad of solutions to providing the best dynamic range, not all of them are equal.

Some video cameras use what's known as a “rolling shutter” which means that instead of a frame being captured all at the same time, they scan lines across the sensor and the bottom of the frame will be recorded slightly after the top of the frame. Rolling shutters allow an image to be captured with less noise but the disadvantages become apparent when shooting things that move very quickly in the frame. One of the most common of these is a partially exposed frame when someone’s camera flash goes off in the room. You've probably had this happen to you at a wedding while trying to catch some video while other people are popping off flashes

When things start moving fast, rolling shutters can get really strange. Helicopter rotor blades look bent like boomerangs, fan blades turn banana shaped and cars can stretch out and distort. Some cameras have an option that lets you switch between a rolling shutter and a global (the whole frame at once) shutter. If you shoot things that move quickly, the ability to use a global shutter can be important to your video.

CMOS sensors have the ability to use either a rolling or a global shutter but global shutters typically cause the dynamic range to be shortened and grain to be increased. Some manufacturers of high-end cameras are producing CMOS cameras with rolling shutters that reduce the performance hit.

The moirÃ© effect is a pattern which appears when two sets of lines are laid, one over the other. On standard definition televisions this could produce crazy, flashing, distracting jagged lines if someone wore a shirt with a lot of narrow stripes on it, but technology has made this less of a problem now. Anti-aliasing filters on a camera actually blur the captured image slightly so that the data is spread out a bit more and improve the way that straight lines appear on screen. Likewise signal processors in the televisions work to recognize and reduce moirÃ© if it appears.

Compression artifacts are another aspect of image quality. The amount of data required for a high definition TV signal is substantial and in order to squeeze all that data into the space and bandwidth available, compression can reduce the file size. Video compressors make guesses based on nearby pixels as to what other pixels should look like. The lower the compression or the better the compression algorithm, the smoother the picture looks. Highly compressed images will look blocky and jagged.

A television is an investment that should last you years and it's also something that you'll be spending a lot of time with, so take your time before purchasing one, and as Macgregor says, whether it's resolution or contrast, trust your eyes and not the spec sheet. Compare images side by side if possible; take the opportunity to read reviews. While resolution seems a simple method for judging picture quality, there are a number of other factors involved.