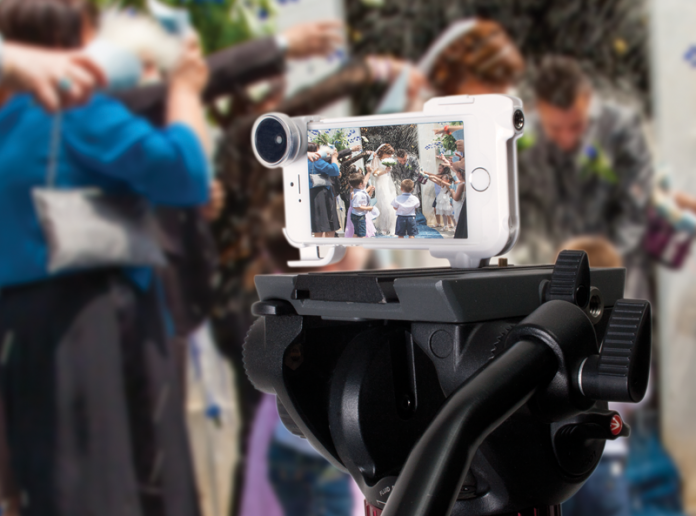 “The videographer!” shrieked the mother of the bride, rushing into the room, “He’s been arrested!”

She fainted dead away.

“Well,” said Melvin, putting down his drink and tapping me on the shoulder, “I guess we’ll have to get this done ourselves.”

He grabbed me by the sleeve and pulled me along with him, waving his cell phone under my nose, “we have all the equipment we need, we just need camera placement, some good camera angles….” He was three sheets to the wind after a breakfast of Froot Loops and gin and a night out setting fires in trash cans with the groom’s father, but he was from Hollywood so I followed him. He’d been a superstar TV producer in the 1980s. The movie about the time-traveling lizard men who take over a Vale ski-chalet? That’s his.

You stick around Melvin long enough you’ll learn a lot about making a movie too. I always try to sit near him at weddings. Not next to him, but near him. >

Your phone is an incredible piece of equipment

“While we get our phones ready I’ll tell you about the old days of video creating.” Melvin said. “Back in my day video cameras were the size of a dachshund and you needed 10 spare batteries, a bag of tapes and a giant bright light for a job like this. Camera placement was limited to wherever you could find room for a giant tripod. Now a cell phone has four times the resolution, and twice the battery life of the available cameras I was snubbed for multiple Emmy’s while using. Think fast, watch your camera placement, be careful with your handheld shooting techniques and pay attention. We’re going to shoot a wedding video for these kids with a cell phone that’s going to make them weep.”

Phones today aren’t really phones, they’re computers with cameras in them that also can be used to make phone calls. It’s a marvel really.

There are some things that make your phone a better video camera than others, like the ability to add memory cards and change batteries. Some phones allow you to do this, others are sealed units. If you can record video to a removable memory card, it gives you the option to copy your files to a laptop and keep shooting.

Although professional video producers might scoff at using a cell phone for wedding videos, they do have their uses, despite some limitations. And if all you have on hand is a cell phone, there are some things you can do to improve its video quality and still capture the event. Before we begin; a warning. Like they say in every movie theater you go into nowadays: “Please silence your cell phone,” Don’t forget to turn off the ringer and all notifications if you are going to use it as a camera during the ceremony. You don’t have to turn it off, just set it in airplane mode. Here are a few other tricks to using these amazing little devices.

Getting good audio is a problem, especially when you’re switching back and forth between two different cameras.

One thing that’s often helpful is to use only one of the audio tracks so that the sound doesn’t jump in volume when you switch between shots. Since there are key moments that a DJ may already be getting through a sound board, look into using an audio recording app. Commit a cell phone to recording the feed out of the board and into the phone, even if for a few specific moments. To connect to the board, you will likely need a female XLR to male 1/8-inch audio cable.

One place where audio is likely to punch you in the face is any time that music is playing. If you edit together a bunch of shots of people dancing, the audio track is going to be a jumble of different songs. One way around this is to pick one song and use that as the sole audio track, place your video over that. People might be dancing out of rhythm from time to time, but few if any, will notice.

Good light is always a challenge, but when you’re using a cell phone you lose a number of the controls that come standard with most video cameras, such as the ability to control your f-stop and shutter speed. There are apps that allow you to have some manual control though things like ISO and aperture may be combined into “exposure.” Many cameras will allow you to tell the camera where you’d like it to make it’s auto-exposure from by touching on the screen. Remember, you can brighten video that’s too dark a bit in post-production, but once the highlights are blown (meaning the bright parts become pure white) you can’t get that information back, so slightly underexposed is usually better than over-exposed.

Luckily there are some places where you can get good light. If the wedding is inside during the day, you can take advantage of window light by placing subjects next to an open window that’s getting indirect sunlight. Just because the ceremony is in a badly lit courthouse doesn’t mean that you can’t have the subjects stand next to a window for a shot or two and talk about their day.

You can also use reflectors and artificial lights to brighten up a dark room. If cousin Sean has some work lights in the back of his truck you might be able to put them in an unobtrusive spot and bounce them off the ceiling. Overhead lighting is usually the worst sort of light you can get, so if you have the opportunity, try to turn down the overheads and raise the window blinds.

Receptions are often dark and that’s okay. After a few drinks very few people want their rendition of the Chicken Dance to be perfectly lit. Sometimes you have to use an on-phone light for which there are products like Manfrotto’s KLYP, and some cell phones will require a third-party app to keep the light on continuously. Use what you have to, and get on to the better footage.

Because cell phone cameras are so small, you can get them in places where, a few years ago, it would have been impossible to put a camera. You could, for example, put one camera right up by the officiant, and get a closeup of the action. All the old rules of composition still apply, like the rule of thirds, look and lead room.

Professional video producers might scoff at using a cell phone for wedding videos, but they do have their uses, despite some limitations.

If you’ve got a fluid head tripod, and an adapter for your cell phone, you can do all the camera moves you’d normally do with a larger camera and they’ll look great. If you’re without a video tripod, keep your moves to a minimum, but don’t eschew them entirely. Plant your feet carefully, hold your camera tightly, and try a couple of pans across the crowd to show how many people are there. Remember, if you shoot it, you don’t have to use it, but if you don’t shoot it, you can’t ever use it.

If you know you’ll be shooting a wedding with your phone it’s good to know a couple of things, like how much recording time you have available on your camera. If you can delete things temporarily and free up space that might be a good idea. Also, does your camera shut off after a certain amount of time or will it run for an hour straight? How long is the battery life?

Bring your old phone along

Remember that other phone you have? The one you upgraded from? Just because it’s not activated and can’t make phone calls and you dropped it and cracked the screen doesn’t mean that you can’t still shoot video on it. Charge it up, bring it along, you can use it to get some long static shots for B-roll. Getting static shots will give you some coverage if your handheld shooting techniques suffer.

There are many apps that will make your video more interesting and will allow you to use your camera differently by enabling manual controls and digital stabilization. One favorite is “8mm Vintage Camera” which costs $1-$2 and has been used by professional filmmakers. It simulates the grainy look of an old 8mm movie camera. Keep in mind when using an app like this you’re altering your original footage, you can’t later decide to undo it. Another useful favorite are time-lapse apps, many are $5 or less and do what you’d expect, act as a programmable intervalometer allowing you to shoot time-lapses of things like the parking lot filling up, people coming and going from the venue, the food being decimated, gifts being left on a table or whatever else would be otherwise captured in an extremely long and boring shot.

One mistake amateur videographers often make is neglecting to get B-roll. “B-roll” means footage of things other than the main event. The exterior of the building, for example, shots of the cake, maybe a pan across the parking lot, the table settings, people chatting informally waiting for things to begin. B-roll by itself is usually pretty tedious, but when used properly to cover up edits and break away from long static shots (for example, a brief cut to the audience while the service is going on) b-roll helps to make your video spectacular.

“Rest assured kid,” said Melvin, after it was all over. There was cake everywhere and a few of the kids were still rooting around under the collapsed buffet table. The head couple had their send off, but we remained, the batteries on our cell phones showing power in the single digits.

“There are gonna be a thousand videos from this wedding up on those online TV channels tonight,” said Melvin, triumphantly, “but none of those chumps knew what they were doing. Our footage is going to look great. When Shamus threw the pie at the groom’s mother, I was right there. Pie everywhere! And we got it from a camera on a tripod with the proper exposure settings. This is one they’re not gonna forget. Hey, I’m thinking about getting back in the game – want to start up a wedding business with me?”

“Not really,” I said, suddenly discovering guacamole in my jacket pocket, “but I wouldn’t trade the experience of doing this one with you for the world.”