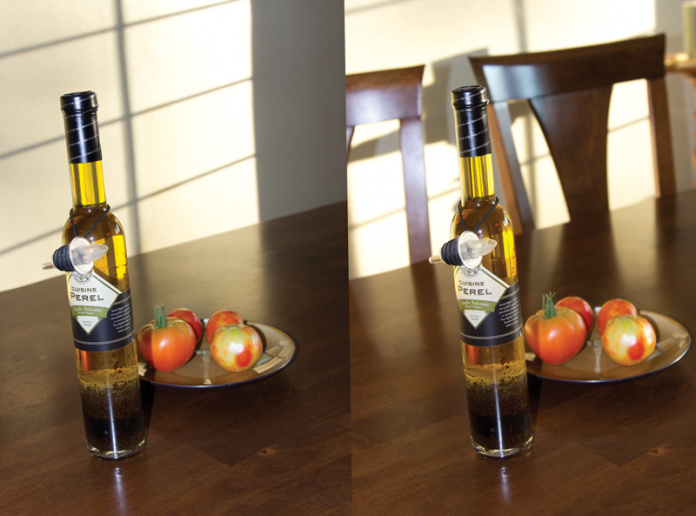 Negative space is an important video element for making characters stand out. Horror movie directors use it all the time, as did film greats like Stanley Kubrick and David Lean. Film and video share a lot of concepts with painting. After all, your video is just a series of 30 or 24 still images every second, each of which can be viewed, deconstructed, discussed, appreciated, and loved or hated for the merits of that frame alone. Single frames from movies have become iconic images like Marilyn Monroe’s skirt being blown up by a subway vent from The Seven Year Itch.

Great directors and great directors of photography strive to make each frame of their work something you could pull from the motion picture and hang on your wall as a still image. They’re able to do this because they have a meticulous understanding of the concepts of art and composition. You should, at least for a little while, think of yourself as a person who arranges a series of still images, and think about how to make each one of those stills work for your final product.

In this article, we're going to talk about one of the most important aspects of framing good shots: negative space.

“Negative space is an important element in framing a narrative,” says Lee Moyer, an award-winning graphic designer and illustrator from Portland, Ore. who has done 100+ movie and theatrical posters. These art pieces might be recognized for James and the Giant Peach, La Cage aux Folles, and The Mousetrap, “It' s not just the areas that you're not noticing because of lighting or focal length or chroma – it's areas specifically "left" black or white. Or gray. Or any sufficiency of undifferentiated space (be it space itself, a desert, a sea, a sky or just a white room). It's [sometimes] like putting a matte around a piece of art. Other times it's keeping the ground clear so that the crunchy edges of an image can be shown in all their finery.”

Before we jump right in and talk about horror movie directors, let's take a really quick look at the elements that make up a shot. First there's the frame, this is the area you can see on a television or movie screen, while it could conceivably be any shape, (like round if you're looking through a submarine's periscope) it's almost always rectangular. There's a top, a bottom and a left and right side. The area within your frame is made up of both positive and negative space.

Great directors and great directors of photography strive to make each frame of their work something you could pull from the motion picture and hang on your wall as a still image.

Positive space is your subject. This can be a person, a car, a tree, or an alien from the Delta Pavonis star system. Negative space is everything in the frame that's not the subject of your focus. Negative space gives the eyes a place to rest. Negative space can be many things such as blank walls, open landscapes, or out of focus trees. It's your job as director or director of photography (or both) to make sure your frame is balanced.

A Jackson Pollock painting or a Where's Waldo illustration are examples of frames made up entirely of positive space; nothing is more important than anything else, everything is crammed together, your eye gets no direction in terms of where to look and where to pay attention. Conversely, a completely monochromatic canvas is all negative space; without a subject, your eyes drift around aimlessly in search of anything. Figuring out how to combine the two is your job.

The frame is the canvas in which you tell your story; into it you bring things that add to your story, make it interesting and beautiful, and you keep out the things that detract. You can use negative space to highlight what's important.

Negative spaces are very useful for framing characters like Luke Skywalker looking longingly over the vast desert of his home planet, Tatooine, dreaming of a place where things are happening, a place without so much negative space, and this creates a mood.

“More negative space,” says Moyer, “tends to create a sense of isolation, massive scale, and sometimes even tension. Whether, and how much, negative space you employ depends upon what tale you're telling and how best to fill the frame.”

Directors use the balance of these spaces like a chef employs spices, delicate balances can very subtly control the way an audience feels, and what they expect to happen.

It's frequently used to play tricks on the viewer, when we see negative space, we expect that it will be filled with something. A very common usage of this is when actors get plenty of space in a frame behind them waiting for something to jump out. Horror movie directors love using negative space so effectively. The thriller Open Water makes excellent use of negative space. Writer/director Chris Kentis and his wife, producer Laura Lau, made a movie that consists almost entirely of negative space when they placed their characters in the middle of the ocean with nothing around them but sharks that could come from any unseen direction. Wide shots of water as far as the eye can see illustrate how helpless and isolated the characters are, with possible danger all around them.

Negative space can also be used to set the tone and pace of a movie, Stanley Kubrick used it often in his masterpiece 2001: A Space Odyssey, a film composed almost entirely of negative space, both to show a symmetrical, uncluttered, futuristic world, and to show how tiny humans really are in the grand scheme of things. By using long shots of spaceships surrounded by the vast emptiness of space he was able to convey the great distances his characters had to travel to reach their goal. His great use of negative space in interiors showed a future where things are simple, elegant, unhurried, and slightly different but obviously advanced.

Negative space is really helpful in implementing the Rule of Thirds; not much is simpler than placing a person in front of a large wall or a neutral background. This immediately draws the viewer’s attention where you want it giving you easy emphasis and clarity.

Negative space is also the realm of the imagination: a character looking out into it lets your mind wonder what they're seeing which can add mystery or drama.

Sometimes it's what's not there that's important. Negative space creates a void and both nature and audiences abhor a vacuum, we have a natural expectation that voids will be filled. One of the most classic examples is from John Carpenter's 1978 masterpiece Halloween. High school student and protagonist Laurie Strode, played by Jamie Lee Curtis, has dispatched the villain, Michael Myers, after an epic battle, she collapses against a door frame thinking how glad she is that the danger has passed. But Carpenter leaves a lot of negative space to Strode's right … the shot pauses and the audience waits on the edge of their seats, what can be coming to fill that empty part of the frame? And we're not disappointed, the unstoppable killing machine sits right up, filling that negative space with terror.

Another clue that Carpenter gives us in this scene is removing all of the look room, the area in front of a character that they typically will look into. He has Curtis jammed all the way onto the left hand side of the screen with all the negative space behind her, so we know that whatever's coming, is coming from behind her. Contrast this shot with Luke Skywalker looking out, across the desert, all that look room tells us that he's looking into the future. Cutting off the look room essentially blinds the viewer and puts us into a box where scary things may come from any direction.

You get different effects by putting negative space in different places. A lot of negative space can make your characters look really small and unimportant, lost in a gigantic world. Consider director John Ford’s 1939 epic Stagecoach. Imagine a static, very wide shot of Monument Valley in Utah. From the bottom right you see a tiny, tiny horse with a tiny, tiny cowboy enter the frame. He's riding really fast, and you can see a tiny, tiny cloud of dust behind him and maybe off in the distance you can hear him yelling encouragement to the horse. After an agonizingly long time he's only crossed 20 percent of the width of your screen. What does that tell your audience? That the west is a gigantic place and your hero is very small, he's isolated and away from help, and all without a word of exposition.

Want to show the opposite? That your character is hemmed in, that his world is claustrophobic? Take away the negative space, put him in a crowded street in New York City, every inch of your frame crammed with a face, put him in a tight room with no broad empty walls. Action scenes are often shot with very little negative space to make things feel close, fast, and frenetic.

There are many ways that you can create negative space. Perhaps the most obvious and most common is to take everything else away and capture your subjects in front of a white seamless background. This is how scenes from TV commercials to newscasts have been done since the very beginning of television, but it's not the only way.

Other ways are by removing visual clutter, taking out extra furniture or distractions, or by using a shallow depth of field. This is also very common and very aesthetically pleasing. This is one of the chief reasons to use a DSLR or Micro Four Thirds camera with a fast lens, those soft out of focus areas isolate your subject and can create beautiful negative space around them which places a stronger emphasis on your subject.

Space can also give the viewer a sense of movement and direction. We talked about how cutting off someone's look room makes viewers uneasy but you can also suggest up or down by using negative space above or below. Imagine a hot air balloon in your frame; having space above makes it seem like the balloon is going up. We expect that space to be filled, so we imagine the balloon is rising. Using the same balloon, but with space below, we think that it is descending, traveling into the empty space.

Your mission is to examine negative space in movies and TV. As much as this will annoy your family, watch with the remote in your hand and when you see a good use of negative space hit pause and examine the frame. How does the negative space make you feel? How does it interact with the positive space? How does its use affect your understanding of the plot? Your mood? Does it make you feel more anxious or more calm? Does it seem to slow things down? Speed them up? Then, when you're framing your next shots, take a look around for negative space, perhaps the sky? Walls? Shallow depth of field? Try employing it in your own productions.