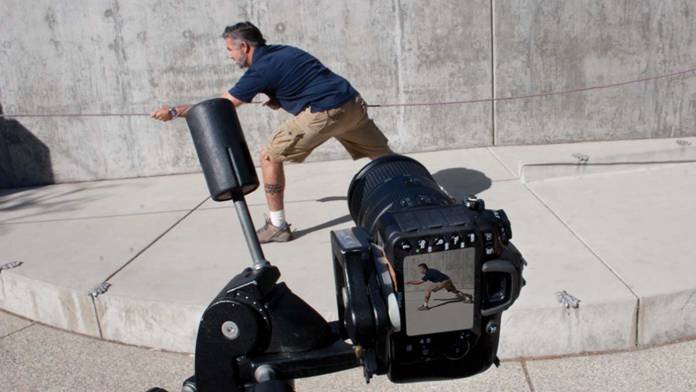 While visiting an old college buddy who is now a famous rocket scientist, you have the rare opportunity to try the time machine he just invented. Unfortunately, due to a catastrophic accident, the time machine has taken you back in time to the year 1966 with no hope of return!

Your newfangled skills as a computer programmer are completely useless as is the ability to hustle people for money playing DanceDanceRevolution. However, opening the local paper you see that the newly-minted TV show Batman is looking for a camera person. You race over to 20th Century Fox and meet with the producers who have but one question for you: How can we make the Batman climb up a wall with no budget and no stuntmen?

“Well,” you say, with an air of authority, because before time traveling you’ve just read this article, “we shall simply use in-camera special effects.” “You’re hired!” says a man in a checkered suit. “Make sure you get my good side,” says Adam West.

What is an in-camera special effect?

When our eyes see one thing, our brain makes many assumptions that other things are true. In-camera effects are tricks that fool you into thinking that one thing is true because of other visual clues you are given. If, for example, you see a monster towering over a building, your brain assumes that the monster is big, not that the building is small. In-camera effects are typically inexpensive and don’t require lots of work in post production. For this reason, they’re often favored by low budget productions. Though in 2013, they also evoke a feeling of nostalgia.

Let’s look at seven common in-camera effects and how to do them. 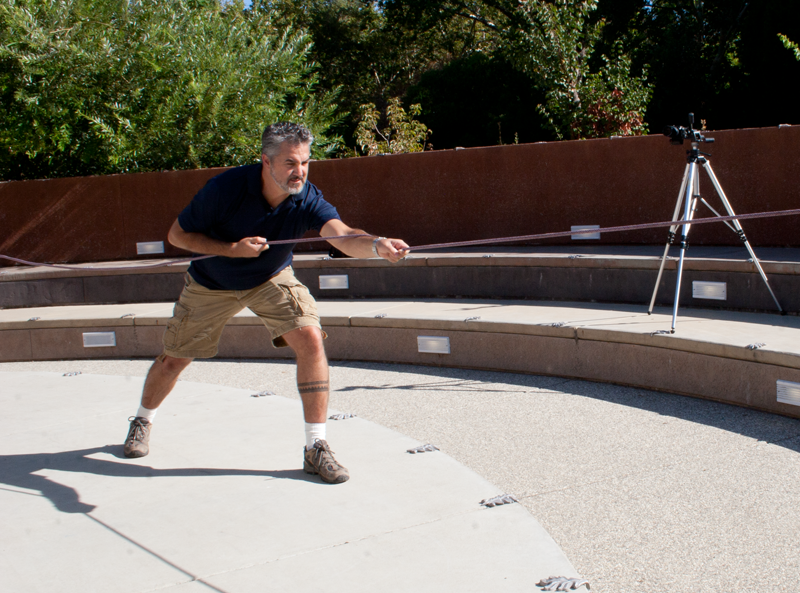 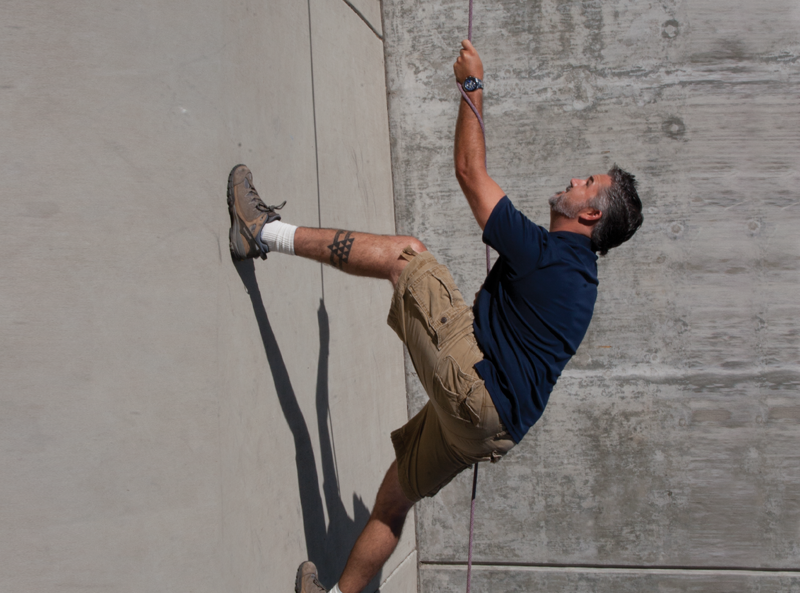 1) Holy gravity Batman! We’re walking up the side of a building!

When you see someone walking up the side of a building on television, your brain assumes that the the building is vertical. By building a set in which the building lays flat, 90 degrees across the floor, you can then turn the camera sideways as well and people walking normally, that is, perpendicular to the ground, appear to be walking up a wall. If you don’t want to build a set, you can do other things, like placing a desk and chair on their sides along a wall – people will assume that they’re on the floor which will add to your illusion.

2) Crush, Crumble & Chomp It With Miniatures

The bigger your models are, the more realistic they’ll look.

Sometimes it’s harder to tell that models were used. George Lucas used miniatures to great effect in Star Wars – while the camera zooms through the Death Star trench or along the top of an Imperial Star Destroyer you’re hard pressed not to think they’re enormous, however Lucas’ models weren’t tiny. The bigger your models are, the more realistic they’ll look. The Star Wars set for the famous Death Star trench run filled a room.

To keep people from guessing you’re using miniatures, you can work to disguise it with quick cutting and camera motion and by removing things from your shot that might give the audience any reference points for scale to compare it with.

In-camera effects are tricks that fool you into thinking that one thing is true because of other visual clues you are given.

3) We’ve been hit by a photon torpedo!

While Star Trek had a huge budget by 1960s standards, they didn’t have everything they would have liked and at times had to fake it. Over the course of its five year mission, the Enterprise was continually torpedoed, caught in webs and tractor beams, bombarded by Klingons and pursued by planet-eating machines. When the ship suffers a hit, crew members topple to the decks and fly over chairs and consoles, Jim Kirk often heroically attempts to ride it out in his captain’s chair but as often as not, he ends up on the floor as well. Set designers didn’t have the budget to make the bridge actually move, so it was left to the actors to fling themselves about as the director shouted encouragement “Left! Right! Fall down!” 20 years later when veteran Die Hard director John McTiernan was directing The Hunt for Red October he didn’t want anything to look faked, so he built three interior submarine sets on enormous gimbals which could hold up to 75 people and tilt them at a 45 degree angle to realistically show the motion of the boats. You can have your actors simulate an earthquake by flopping about, and tossing some debris into the frame or rigging some props to fall from walls, completes the effect.

Sometimes, the most obvious is the most simple effect of all. When J.J. Abrams shot the 2009 Star Trek movie he had a scene with three characters skydiving from space in a rather dramatic moment. Shooting the scene took many hours, requiring the characters to hang upside down staring into the camera, which resulted in light-headed actors. So Abrams reversed the shot, having them stand on mirrors and looking up. Then he flipped the image in editing. 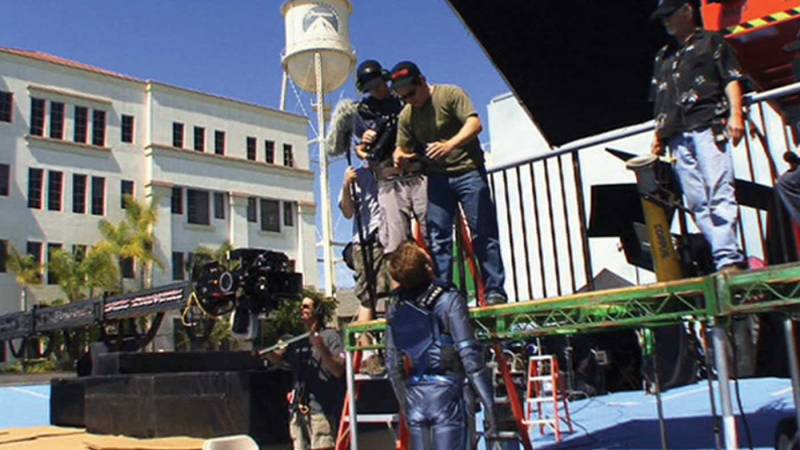 5) Split Screen: Dancing With Myself

Split screens have been used in moviemaking even way back in the film days when it involved masking half the camera lens, photographing a scene, then rewinding the film, switching the mask so that it covers the other side of the camera lens and re-exposing the film with new action taking place on the other side. This allows characters to have scenes with themselves and is sometimes cheaper than hiring twins. You can’t really expose videotape or .mpg files twice, but today, most digital video editing systems have the ability to do sophisticated split-screen effects that will allow your actor to interview themselves or turn one car in your driveway into two.

Today chromakey and green screen technology comes with nearly every video editing system, but it wasn’t always that way. When Lucas made the first Star Wars movie he relied on paintings for the backgrounds of the complex and strange worlds he’d created. P.S. Ellenshaw, who was the head of Walt Disney’s matte painting studio at the time (but working freelance) painted 13 different paintings that were composited in with live action and actors—most famously, the deep pit in the Death Star that Obi-Wan Kenobi (exquisitely played by Sir Alec Guinness) crosses to turn off the tractor beam that captured the Millennium Falcon.

Lucas continued using matte paintings for his future Star Wars movies, hiring Mathieu Raynault to paint the planet Naboo for Star Wars: Episode II Attack of the Clones. While matte paintings are composited in post, you can use in-camera matte paintings in conjunction with miniatures to put a car on the surface of the moon by simply shooting your miniature in front of your painting.

Forced perspective is using wide angle lenses to make small things look large or large things look small. The closer something is to a wide angle lens, the bigger it looks and the farther away something is, the smaller. So by placing Junior up close to the camera, and dad in the back, you can make them look to be the same height. Check this article out for some more Hollywood secrets that you can easily create at home without a Hollywood budget.

Back to the Future

Everybody loves your camera work, Batman becomes a sensation, you move on to bigger and better things. In 1968 you stole Marty McFly’s idea and won big from gambling on sports statistics and you’re a rich and famous celebrity. In a strange turn of events, you’re invited to be the commencement speaker at your college the very year that you graduated. You scan the audience and in a time-travel paradox you lock eyes for a moment with your younger self, and wink.

Directing is a tough job. The long hours and pressure of keeping a production on track require a strong leader. While the stereotype of...