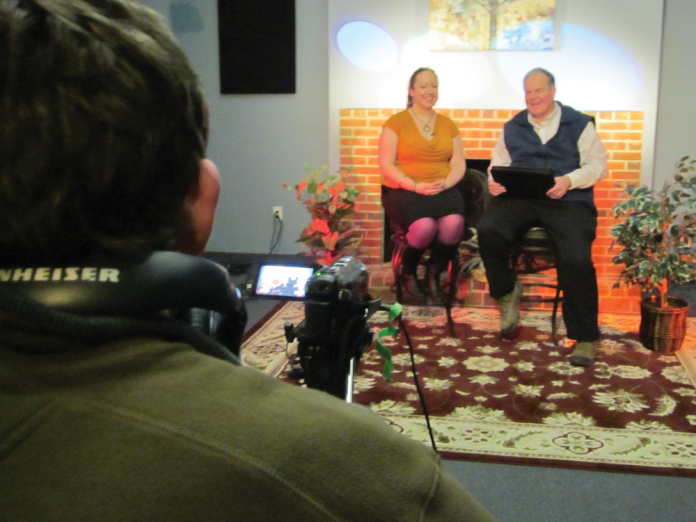 Several years ago I heard someone say that "Public Access Television isn't real television!" Upon hearing a statement like that, all I could do was smile and walk the other way, because in my heart I knew that real TV is about my neighbors, my local government, my children's school, after school activities, and the interesting folks I have met and their friends. I truly believe that any interesting story has the potential to be compelling and real TV.
What is Public Access Television?
Part II of The Cable Communications Act of 1984 requires that a franchising authority, which is typically a local town or city government, has the authority to require a cable operator to provide television channels that are designated for public, educational or government use. The exact determination of how many stations are designated, how they are to be funded, and who will run them is spelled out in the franchise agreement, which is typically a 10-15 year contract between the cable provider and the local government authority which is usually negotiated through a series of public meetings.

These television channels are generally referred to as PEG (Public, Educational and Government) channels. A franchise fee, which by law can be no greater than five percent of the television portion of your monthly cable bill, provides the funding for PEG channels.

In the 1980s and 1990s, the cable provider usually built the studio, purchased the equipment, hired personnel to run the studio, operated the equipment and provided training to local residents who were interested in producing their own shows or helping out. In general, local residents did not have a tremendous amount of input into the day to day operation of PEG stations. In the New England states in particular there were a couple of mergers and buyouts that negatively impacted local PEG stations.

In the mid 2000s, when many of the initial franchise agreements were coming up for renewal, Comcast made it clear that it wanted to put the day to day operation of PEG channels and local access studios into the hands of the local community. As part of the renewal contract they often accomplished this by requiring that a non-profit organization be established for the sole purpose of operating a local community's PEG station(s). The franchise fee that Comcast collected would then be sent directly to the PEG non-profit.

The advantage of being an independent non-profit is that the board of directors can more easily make changes in order to adapt to changing technology, local viewership interests, and local membership needs than a town government can or even a cable provider would be able to.

This author volunteers at Boxford Cable Access Television Corporation, Inc. (BCATv), a 501(c)(3) non-profit organization that was established in 2005 for purpose of operating a government channel and a public access channel for use by the residents of Boxford, Mass.
Initially appointed by the Boxford Selectmen in 2005, its non-profit has three board members, who started out as videographers when Comcast operated the PEG channels, and now share the responsibility of operating two television channels that broadcast 24/7, as well as a recently acquired public access studio.

Video This Week/Show Next Week

The philosophy of the BCATv board is that public access television is more like fresh fish, than fine wine – it generally doesn't improve with age! Since a lot of video producing opportunities involve on-location work such as local high school and youth sports, community events, lectures, school concerts, etc., the goal is to show next week, those events that we shot on video this week. This philosophy has been very successful in sparking community interest for both watching our community channel broadcasts as well as inspiring individuals to step forward and create their own events.
In order to produce 15-20 new events averaging 60 minutes each on a weekly basis requires a lot of easy to use video equipment, dedicated people, effective post-production techniques, fast Internet connections, good organization, and patience. Also, don't forget that you need events to record! 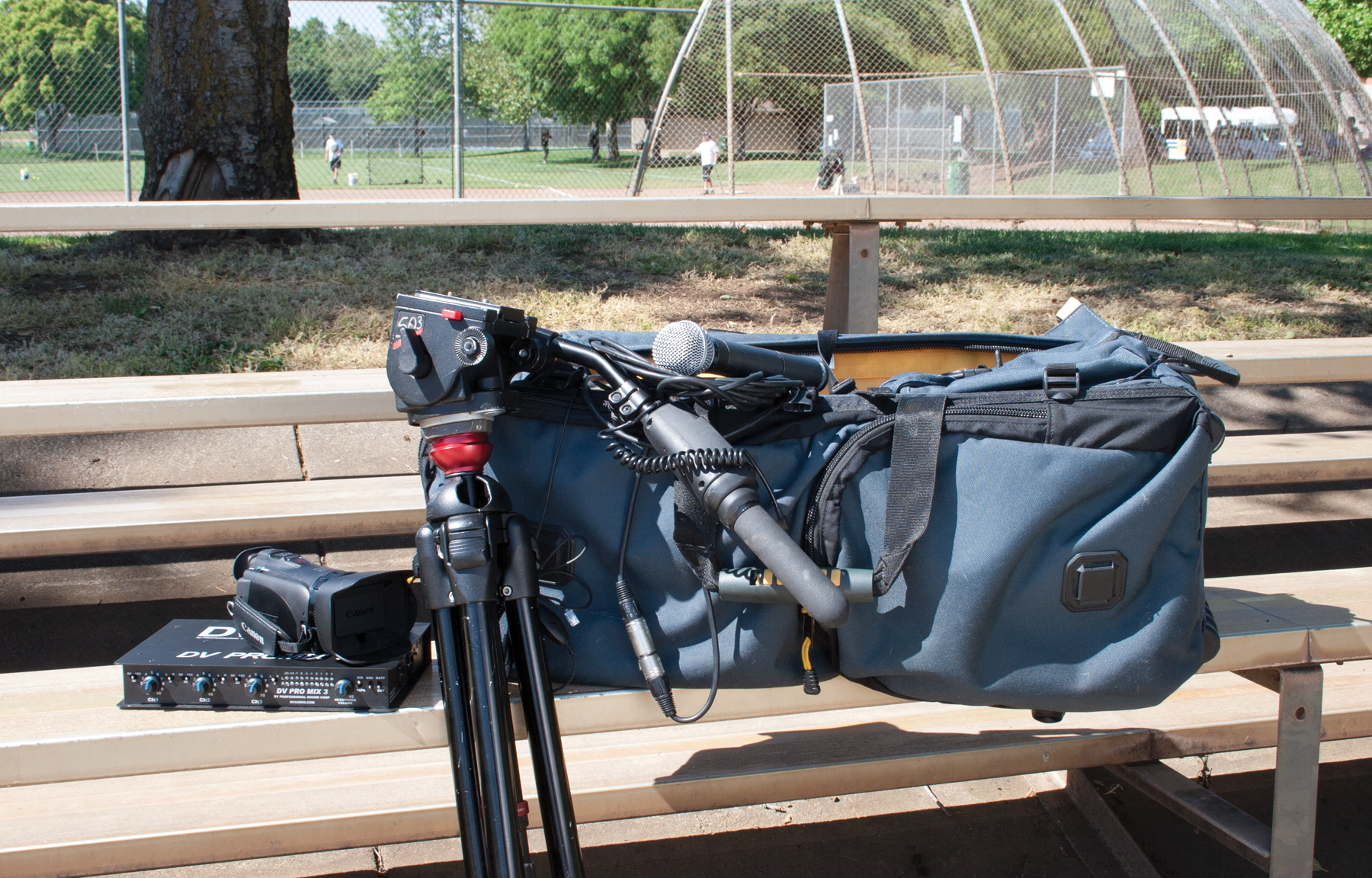 Studios in a Bag

We have six "Studios in a Bag," which typically consist of a Canon VIXIA HD memory chip camcorder, Libec ZC-3DV remote zoom, Velbon DV-7000 tripod, Shure SM58 and PG58 microphones, 3-4 headsets, Rolls MX5124 Pro-MixIV mixer, their appropriate cables and a carrying bag or equipment case. Everything is battery powered and the components are selected based upon a combination of weight and reasonable price. Fully loaded, these bags need to be easily carried by anyone between the ages of 13 and 75.

This equipment can be quickly and easily setup on a gym's bleachers, on top of a press box, in a meeting room, on a soccer field, lecture hall – almost anywhere. The mixer will support up to four mics and some of the bags have wireless mics and headsets.

Finding and keeping dedicated people is always a challenge. Word of mouth, a friend of a friend, a brother or sister are all proven techniques. One thing that helps BCATv is our local high school, which requires that every student perform 10 hours of community service every year. BCATv works with the school and helps students fulfill this requirement through public access television. Because we only have one paid administrative position, who is a part-time manager/scheduler, we have some financial flexibility. As a result, we waive membership fees for students and seniors, and once a student's community service time is fulfilled, we will pay them an hourly rate that is more than they can get bagging groceries.

Our youngest student started almost two years ago and he is now in 7th grade. His brothers are on the high school soccer team, and he wanted to run the camera at home and away games. We paired him up with our best announcer and they have covered almost 30 games in two years, including a Division 1 state championship. With his knowledge on how to make a video, he also edits and produces several videos for  BCATv every week.
Our oldest student announcer started covering hockey games as a sophomore with his friends. Later that year, he and his younger brother covered men's softball games in the summer and became an instant hit in the town because of their humorous and sometimes wacky commentary. The older brother is now a junior at Boston University majoring in communications and he does sports coverage for a major Boston radio station during the summer.
Currently we have about 20 students who put in significant hours during the course of a year. Several are in college who come back on winter and spring breaks and during the summer. We live in a bedroom community, so there aren't always a lot of activities for teens to do, especially after school and during the summer. Public Access television has definitely helped fill that void.
It Pays to be Organized

We let our members choose their events and pick their roles, such as camera, play-by-play, lighting, etc.

In order to keep this fair, we will have a quarterly meeting with them to let them know what is upcoming and make sure that everyone gets enough events to cover. Before the meeting, we will make sure that we have updated our website with all the upcoming events we can find, which is not always easy. We visit the websites of all the local schools, sports programs, youth orchestra, churches, hobby clubs, charities, town government, newspapers, etc. We also need to ensure up front that we have permission to record and air the event, so we will send out an email requesting permission the first time around.
Members have their own login to our website and a BCATv email address that links to their own personal email. We also provide free business cards to those members who want them. These are all inexpensive incentives that lets our members know they are an integral and valued part of our organization.
Keeping It Fun
During the summer we will record a few major out of town events, such as a military air show, a live concert, an all-night cancer walk, a whale watch, etc. All of these events are several hours in length and require multiple cameras and post-production work. These events are usually one or two hours away, so adults provide transportation and BCATv will pay for travel time, lunch, dinner, water, soft drinks, etc. We want these field trips to be fun, memorable, and both a reward and an incentive for doing great work.
The air shows are a lot of fun, especially if you have never seen a jet-powered school bus scream by at 300mph, a stealth bomber fly overhead, or a stunt pilot like Michael Goulian do amazing death defying stunts! We will arrange for media passes ahead of time, which allows our videographers access to the press viewing area, the ability to get interviews at the hangers after a performance and at the stationary displays on the tarmac.

The Opportunities Are Unlimited!

BCATv recently purchased a 2,100 square foot office condominium with a 27-foot x 30-foot cathedral ceiling sound conditioned performance area and enough space for a control room, three editing rooms, a 20-foot x 30-foot space for training and meetings, and a room with racks for equipment storage.
The performance area is equipped with four HD cameras, a Blackmagic ATEM 1 M/E Production switcher, a PreSonus StudioLive 24.4.2 24-channel digital mixer, and a variety of custom-built and commercial LED lighting. To date we have recorded several musical performances, a lot of interviews, and several lectures. We also rent out the space to bands for practice rehearsals, but will waive the fee, if we can record a 25-minute performance that we can air on our local public access station.
Final Thoughts
It's all about providing our town's cable subscribers with a variety of fresh and engaging local public access television every week. It's only fair, because they are paying for it every month via the franchise fee that is added to their cable bill.
In order to make a local public access channel successful, there also needs to be a handful of local residents who will step up and become unpaid board members, or unpaid volunteers. These folks do this because they are passionate, they want to give back to the community, and perhaps they want to offer their children the ability to create community channel television, rather than just watching commercial television.
From a personal note, this is my 20th year as an unpaid volunteer at BCATv. My girls, who are in their mid-20s, have spent a lot of quality time with me at the many video producing events that we have been lucky enough to cover. It's been a great experience!

Brad Sweet works full-time as a senior software engineer for financial services firm and he has been an unpaid contributor to Boxford Public Access TV in several capacities since 1993. He is a board member and the vice president/secretary of the www.BoxfordCableTv.com non-profit with responsibilities for scheduling volunteers to cover events, website development, and field/studio equipment evaluation and selection.