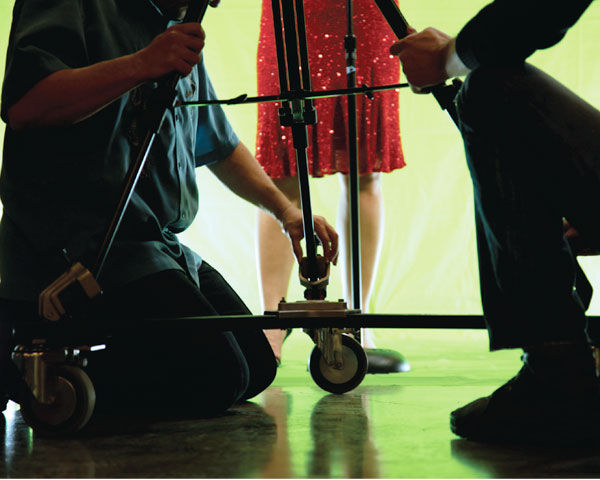 “Alright,” barked Bob through the papier-mâché megaphone that had the word “director” stenciled on the side in crude black letters, “When Herman comes out the door, Joe, I want you to leftmove the camera along with him.”

Herman sighed. He was an aging 1970s action star, far past his prime. For him this was just a paycheck, but we were all excited to have him in the commercial we were making for Bob’s father’s sweat sock company. Bob’s idea was for Herman to karate chop a bunch of sock puppets from competing vendors while bellowing his catch phrase “There’s one in your eye!”

“Action!” shouted Bob through the megaphone. Herman, Joe and I were all within ten feet of him but Bob thought the megaphone would make him look more professional in front of the star. Herman walked out the door of the laundromat and Joe started side-stepping left with the camera following him down the street.

“Cut!” Bellowed Bob, “what kind of leftmove the camera is that? I said leftmove not walk!”

“Swivelmove the camera left, from the hips! Swivel with the hips not walk with the legs!” Bob waved his arms animatedly.

“I wish you knew the names of the camera moves,” said Bob, still holding the megaphone to his mouth, “you’d be a much better camera person.”

Herman couldn’t take it anymore. “Leftmove and swivlemove are not camera movements you nitwits!” We all turned to him.

“Look,” he said, “I can’t wait to get off this miserable film and back to painting my garage, so I’ll give you a lesson for free. The word you’re looking for is pan. As in “pan left” which means keep the camera in the same spot and turn it to follow the action.”

“Ah,” said Bob, holding the megaphone a foot from Herman’s anguished face, “and is there a name for leftwalkmove the camera?”

“Truck!” said Herman, karate chopping the megaphone out of Bob’s hand, “truck left. Look, I’m going to draw a chart for you numbskulls.”

Shots When the Camera Moves 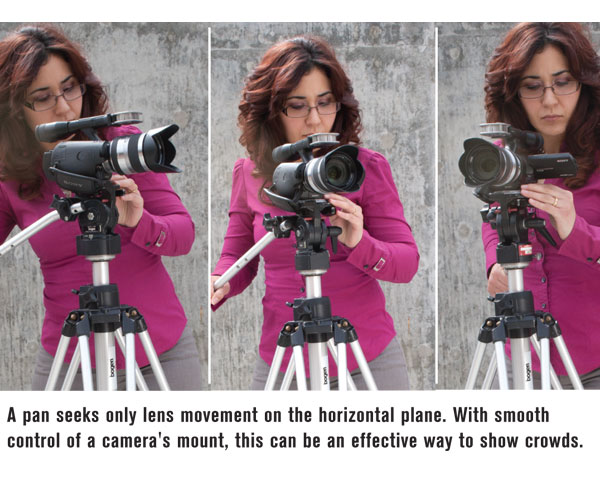 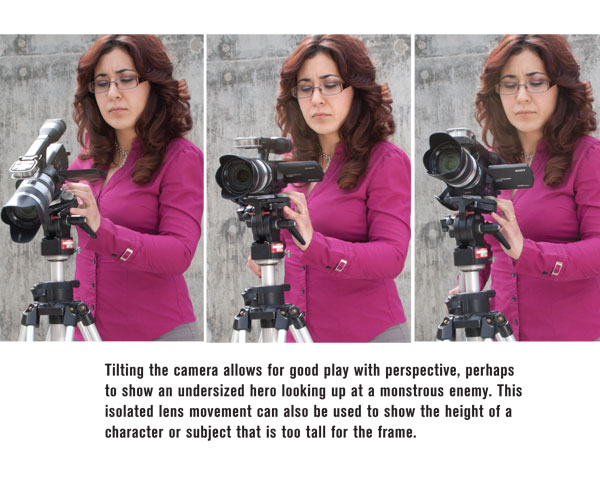 Pan – the camera stays in one spot while the lens moves left or right. Pan left or pan right.

Tilt – the same as “pan” but up and down. Tilt up to the sky, tilt down to the ground.

Pedestal – move the whole camera up or down keeping the lens at the same angle to the ground (usually 90 degrees), as though the camera is on a forklift. This term comes from when TV cameras were mounted on mammoth supports (some were giant tripods, others were large based monopods actually called pedestals) that could be cranked up or down.

Shots When the Camera and Operator Move: 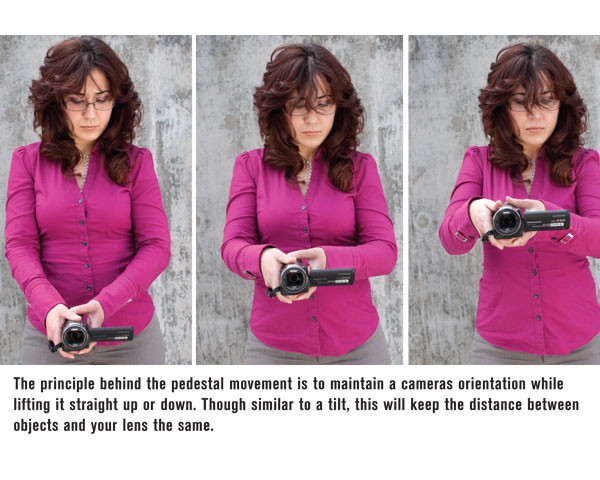 Truck – moving the whole camera and mount left or right. “Truck left” or “truck right,” usually when this happens, the camera lens stays perpendicular to the subject.

Dolly – moving the camera closer to or away from the subject. “Dolly in” or “dolly out.”

Crab – a term similar to truck which usually means for a handheld camera operator to walk sideways (like a crab). With the advent of stabilized camera mounts it’s largely a directors choice whether to say truck or crab.

Follow or Track – Follow means what you’d expect, you follow along behind a subject as they move along – track is similar, but from the side. Saying “track” rather than “dolly” suggests that the route might be irregular. 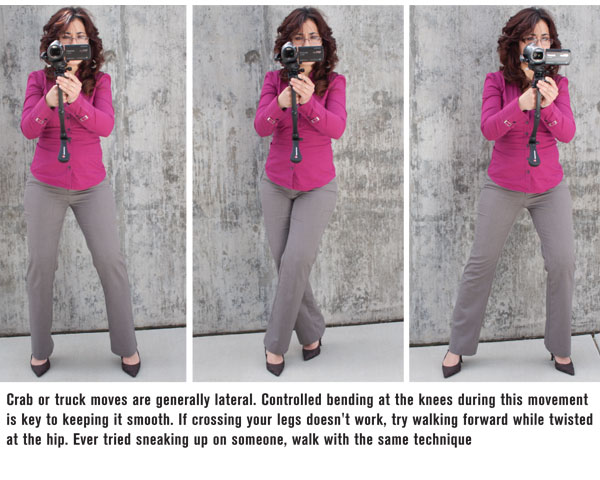 In the old days when dolly tracks needed to be set up and the camera restricted to those tracks, you could dolly along with a knight charging into battle and the knight may move closer to the camera and farther from it while he hacked his way to victory. Now that cameras aren’t always nailed down like that, you could have a camera that “tracks” instead, which may keep a similar distance to our knight as he runs all over the battlefield, making turns and dodges that a movie camera in 1950 would never have been able to keep up with.

Moving Shots with No Camera Movement:

Zoom – Although some people call this a moving shot, zooming isn’t really a camera move, since the camera stays completely stationary and bits of glass move around inside the lens. Zooming (either in or out) changes the focal length of the lens, which means that the perspective of the subject changes. (Homework assignment: Record two people standing on the sidewalk with your camera zoomed out all the way to its widest focal length. Then zoom your cameras lens in all the way and back until you have those two people in the frame again the same size – see how the elements in the background have changed. Also note how the shape of the people in your lens has changed. Wide-angle lenses stretch things at the corners out, making people look wider. This change in perspective makes the weirdest camera move possible.

Hitchcock Zoom, Zolly or Dolly Zoom – This is a strange and wonderful camera movement that is one of the least common, but one of the most noticeable. The camera physically dollies, either in or out, and at the same time the lens zooms in the opposite direction. So, the camera dollies in while zooming out or camera dollies out while zooming in. These have to happen at a rate which keeps the object in the center of the shot the same size while everything behind them weirdly grows or shrinks. Although he didn’t invent it, director Alfred Hitchcock popularized it and used it to great effect in his movie Vertigo, which is why it became named after him.

My favorite use of the Hitchcock Zoom is in the movie. Jaws. Police chief Martin Brody, played by Roy Scheider, is sitting on the beach, one of a very few people who knows that there may be a giant shark in the water. Confronted by a heavy-handed mayor he reluctantly agrees to let people go swimming. When the inevitable shark attack occurs the camera trucks in on Brody at high speed while zooming out and the discordance gives us a visual feeling of the terror and disbelief the police chief is feeling in his stomach.

Many of these camera moves can be done in conjunction with one another – tilting and panning while zooming is common, as are tracking shots that pan. Camera moves shouldn’t be thought of as a beginning and an end, but steps on a journey. You may truck in at the beginning of your shot, then track left, pan left, tilt up and zoom in to take you to your next shot.

Writing about the camera movements of German filmmaker Max Ophls, scholar Dong Liang points out, “In calligraphy, one seldom finishes a word in a single stroke, not because it is technically impossible, but because the rhythm of writing is established rather by a smooth alternation of long and short strokes, of curves, straight lines and dots.” Like this, your camera movements need to work together to tell your story.

There are devices like cranes and booms and wires that can put the camera in places where a person normally couldn’t be – these add a third dimension to camera movement, namely it can fly while performing any of the other camera movements. A camera operator can, for example, tilt down while being lifted into the air by a crane, keeping the same person in focus as the perspective changes.

Herman exited the laundromat and turned to his right. The camera crabbed left as he walked down the sidewalk, then stopped, panned left into the street to reveal a crowd of evil sock puppets, panned right and tilted up to show Herman scaling the wall like a ninja, pedestaled up while tilting down, then Hitchcock zoomed in as Herman snarled “Here’s one in your eye!” before he leapt at the camera.
“Cut! Print!” shouted Bob through his megaphone. This was going to be a fine commercial.

At one time dollying or trucking required a camera mount on wheels. Studio video cameras were usually pre-mounted on wheels while film cameras required actual tracks (called dolly tracks) to be laid and a sort of railroad car (called a dolly) on which to rest the camera, along with the camera operator and focus puller. While hand-holding a camera is popular, dolly tracks are still frequently used on productions. To make things a little complicated, you don’t always use dolly tracks to “dolly in” or “dolly out” the camera. The physical camera dolly is not always the same as the camera move “dolly”. You can use dolly tracks to truck the camera left or right or even to make a complete circle around the subject, as well as use dolly tracks to dolly the camera in or out.

Camera dolly tracks can come in any length, from many feet to only several inches – a really short dolly might be used to move a small camera across the contents of a bureau or to pass by an open doorway. Dollies are also one of the more common home-made pieces of video making equipment. A quick look on the Internet will bring up a variety of plans for making dollies and dolly tracks.

On the opposite end of this function, a slider sits atop a tripod and while a dolly moves on wheels, a slider has rails that the camera moves across, but the tripod doesn’t move. Fun stuff, huh?