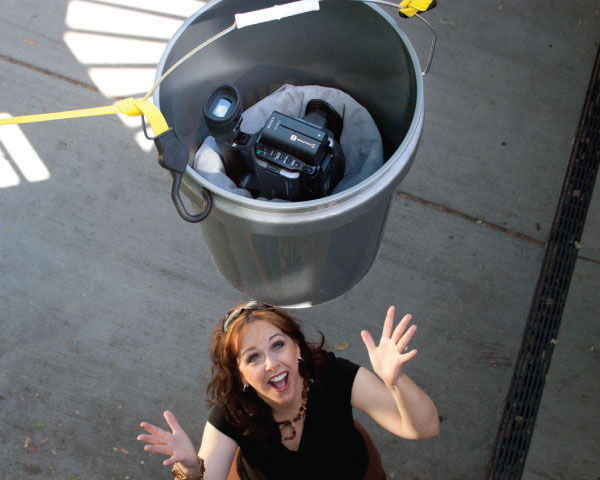 Were you in the AV club in high school? Were you the person that teachers relied on to thread the film through the projector, change bulbs or figure out how to get the tape player to play through the speakers? Very likely you were, and it’s that same tinker’s spirit that has you out making videos today.

There are lots of pieces of equipment made to perform very exact tasks in video production, from camera mounts that help cameras move smoothly to light producing and shaping tools. We all look through thick catalogues crammed with gear with a quickening heartbeat and wide eyes (I know I’ve never seen a light modifier I didn’t immediately know would solve every problem I’ve ever had with lighting), and this gear acquisition syndrome can be hard on the bank account. Video producers though, are people who look for creative solutions to problems and a sub-current of DIY (Do It Yourself) runs strongly through our community, powered by the same thing that made you want to learn how the ditto machine worked back in 4th grade. This month we’re going to take a look at some DIY resources and ideas to get you started making your own equipment. 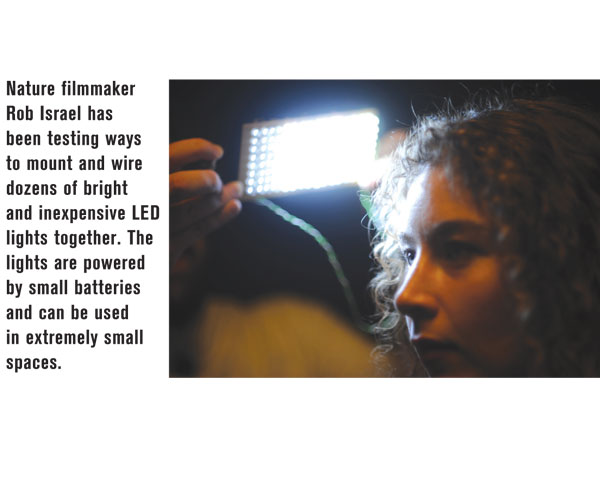 I like to travel light when I’m on the road doing video and this very often means one camera, one fast lens and one tripod. While the camera and lens can easily fit over my shoulder alone, my tripod bag is three times the size of my tripod which very often leads me to think “well, if I have this mostly empty bag, I might as well fill it with light stands and batteries” and suddenly I’m carrying 40 pounds of gear. I’m puzzled that when my tripod manufacturer made my Very Expensive Tripod they didn’t think to put a couple of D-rings on it so that you can attach one of those extra bag straps cluttering your closet. You can take care of this yourself by using hose clamps to attach a pair of rings to the top and bottom of one of the legs and then attaching one of those extra straps you’ve hoarded from every duffel bag you’ve ever thrown out and are littering the back of your hall closet (I save them too, don’t feel weird).

A few years back I was taking video of a construction site and although there were lots of sparks and people hammering things, the video suffered from a two dimensionality that didn’t really show off all the action that was going on. Noticing a crane being used to haul heavy items from one place to another I asked the foreman if it would be possible to have the crane operator make a pass over the side with a video camera. He agreed and I created a camera mount out of a five-gallon bucket with a hole cut in the bottom. A video camera was mounted vertically in the bucket aimed through the hole and held in place by a half dozen rolled up T-shirts. A five-minute pass over the site provided some “WOW” footage for the client and something interesting for the crane operator to take home and show his family. You don’t need a crane to get a camera in the air though – the same bucket suspended from a rope between a third story window and a tree in the back yard later provided aerial footage of the most intense game of croquet of the summer of 2007.

Out in the World 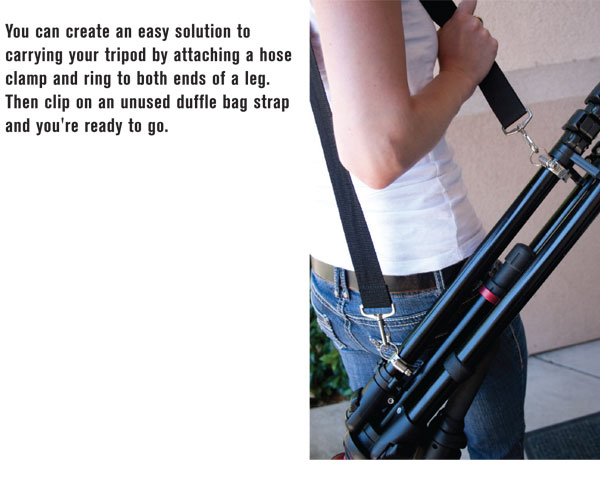 Videography enthusiast and nature filmmaker Rob Israel has been making his own equipment for years, inspired by necessity and curiosity. “Sometimes you need to spend a lot of money on equipment,” he says, “and there’s no way around it, but other times, if you have a free Sunday afternoon and a few tools, there’s no reason to.” Rob’s made a lot of his own equipment, most recently a stabilizing camera mount for his Nikon D90. “I’d seen photos of one that someone else built on the Internet that required a lot of very specific equipment that I didn’t have, like a pipe bender, and I started thinking of things I had around the house that could serve a similar function.” In the end, Rob’s camera mount included pieces of PVC pipe, a gimbal from a radio controlled car axle, and a mounting plate previously used to hold a hard drive in a computer. “The hard drive mount actually has a lot of room to make adjustments,” he says, “which is important when you’re using a DSLR – which is asymmetrical – it has a battery on one side but a centered tripod mounting screw, its center of gravity is a bit strange and with the [stabilizer] you want the center of gravity to be at a very particular point about four inches under the camera.”

The lens shade that might have come with your camera is as large as it is convenient (and still you may have lost it or, like me, keep it in a drawer most of the time), but sometimes when shooting with lights very close to the subject your lens shade isn’t big enough and your shot fills with the white mist of lens flair. If you’re on a set with lots of grips standing around vandalizing the catering table you can have one of them “flag” the lens – which is to say pick up a big piece of black foam core and block the light spill that gets into your lens, or you can hold your hand up next to the lens like you’re about to karate chop someone and angle it until the flair goes away. This is what I often do, but if you need both hands, are moving the camera, or are fresh out of off-camera assistants, a matte box may be just the thing you need. “Real” matte boxes are so expensive that many a videographer has been inspired to create one from things around the house. There are a number of tutorials on YouTube from the very simple – manufactured of immobile cardboard – to ones made with fully articulated barn-doors. Many of them are based around the Cokin filter adapter, allowing the matte box to also perform that function. Simply searching for “DIY matte box” will lead you to step by step tutorials.

You might not know it, but there are a number of lively forums on the Videomaker.com website where readers of the magazine discuss all sorts of topics. It’s always a good place to trade ideas or comments about the latest issue, and it’s also a great place to learn and share your ideas. There’s a DIY forum under community>forums> DIY. Here people are discussing things like how to get a video camera to the roof of a church, and possible ways to inexpensively create huge banks of LED lights. Videomaker DIY Forums

Next time you’re looking for a piece of video gear, from a dolly to a softbox, take a minute to look around the Internet to see if other video enthusiasts have figured out how to make it themselves – or if you have a great idea of your own, have a go at making something yourself. Then share it with us on the Videomaker DIY forum…please?