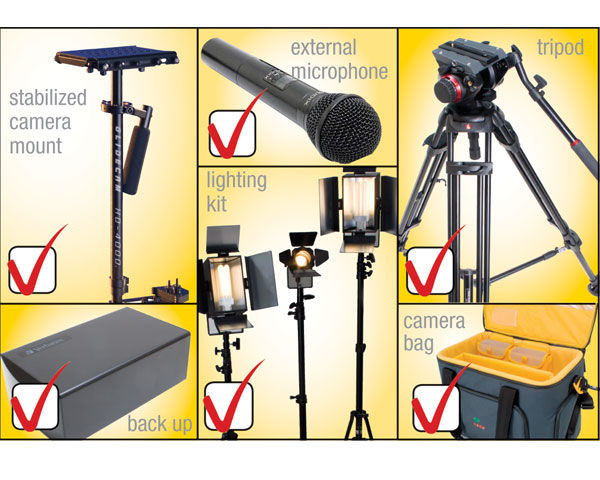 From creating works of imaginative fiction to recording important events like birthdays and weddings, people are using video in the home and office more than ever before. And while some video productions can involve hundreds of people and costs millions of dollars, others can be done on the simplest equipment by a single person. This month we’ll look at how to get started in video producing.

Despite what you may have been told, you don’t really need a lot of fancy equipment to get started in video creating. The one thing you do need though is some sort of video camera. This can be anything ranging from expensive HD pro gear to a DSLR (Digital Single Lens Reflex) that shoots video to an old VHS camcorder or Hi8 machine from a yard sale, or even an iPhone or Barbie Girl camera.

Things You Should Probably Have

After you have the obvious essential, there are a number of things that will make your life easier and your work better.

Having a tripod allows you to not only get out from behind the camera and get into shots yourself, but it gives you a stable platform to shoot from even when you are controlling the camera. There is little that is more annoying in video productions than long hand-held static shots. While you will have many cameras over your lifetime, you should consider your tripod a once-in-a-lifetime purchase, you can get a cheap one now, but you’re only going to have to replace it later. Even though cameras keep getting smaller and smaller, it’s a good idea to get a tripod that holds at least twice what you expect to put on it as further down the line you may be adding gizmos to your setup or you may upgrade to cameras that take bigger lenses or you may want to attach a telescope to it at some point to videotape a lunar eclipse. Professional tripods have two distinct parts, the legs and the head, which you can buy separately. All-in-one tripods lack versatility and should be avoided. The legs, are just what they seem and are the low-tech portion of the tripod. The real magic is in the head which are designed for different purposes and you may end up with several different ones. Good video heads allow for tilting and panning with one control arm and are filled with fluid to keep the motion smooth.

Unlike a tripod there is probably no one camera bag that will last your entire career. If you’re like me, you’ll have a closet full of them, all suited to different tasks, from week-long shoots in far away places to an afternoon at the parent’s. Because of that, I think it’s okay to skimp on your first camera bag until you know your needs better. You need something that holds your camera and a few accessories (batteries, charger, sandwich, etc.), has some amount of padding to protect your gear, and compartments to keep it from rattling around too much. Then in a year or so, when you know exactly what your bag’s not doing for you, drop $300 on something from Porta Brace, Lowepro or Tamrac.

Imagine that your computer crashes. What do you lose? Now imagine that your house burns down. What do you lose? If you’re doing it right the answer to both these questions is either “not much” or “nothing”. Many of us are good at keeping backups of things, but an important component is to keep one of the backups “off site”. This may mean keeping a set of DVDs in your mother-in-law’s basement, or a spare set of hard drives at the office. With 2TB drives now in the area of $120 backing up to external hard disk is often the simplest option. There’s even cloud storage now, but research well. If the company goes under, where are your files?

Things You’ll Want to Investigate at Some Time or Other 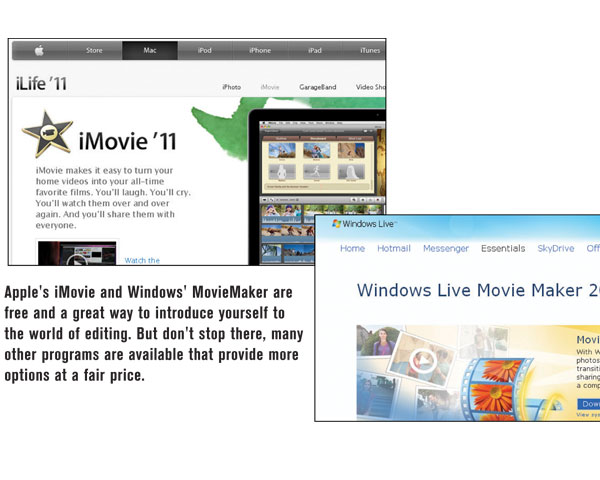 You can get away with simple things for simple projects but as your video ambitions progress you’ll want to expand from your basic kit to give yourself more options.

Some people may wonder why this isn’t under “things you need” but for the first years that home video was available not many people had editing systems and they got along well enough capturing birthdays and trips to the zoo and watching them back to the delight of friends and family in an un-edited state. Both Windows and Macintosh OS machines have free video editors that come with the OS (Apple’s iMovie is built in, but Microsoft’s MovieMaker needs to be added, though it’s free) and there are a number of low cost and even freeware editing systems, as well as more expensive professional editing solutions with everything you’d need to produce a theatrical release. Editing your video adds a new dimension to it and is much easier on your viewers, though it is time consuming. If you want to move from “family record” to anything more serious you’ll eventually need to learn to edit video.

The microphone built onto your camera is designed to pick up sound about three feet in front of the camera and directly ahead. No matter how good your video is, if your sound quality is bad, you have a problem. As your video skills advance, one thing you’ll want to do is get the microphone off of the camera and eventually, to use multiple microphones possibly connected to a mixing board that will allow you to set different sensitivities for each of them. 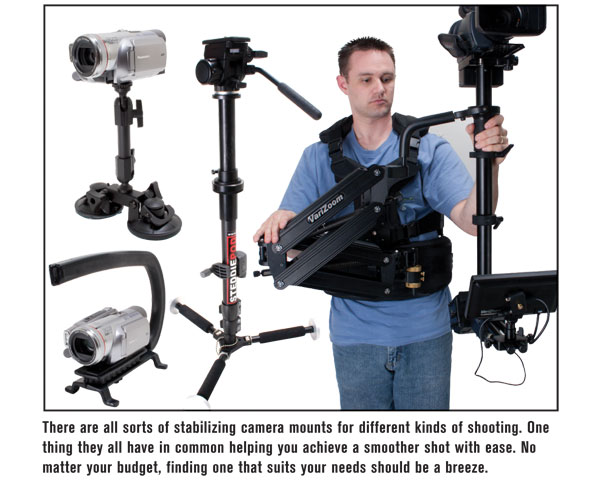 In 1976, a cameraman by the name of Garret Brown invented a device which attached to a camera and allowed it to be carried hand-held with extremely smooth results. He called it the Steadicam and today it’s an industry standard. There are lots of other companies which make similar counter-balances for hand holding cameras of all sizes, the cheapest of these are less than $100 and extend upwards to a $25,000 Glidecam platform. All of them serve to dampen the jilting motion made by a camera operator walking.

Light is the key to a good image and you can’t always depend on your environment to give you the light you need. Basic three light kits that include stands and light modifiers like umbrellas or softboxes, start at about $200 and the sky is the limit from there. Having lights and using them well can be one of the keys to moving your video work to the next level.

At Videomaker and especially in the Basic Training column, we think about these things all the time. It stands to reason that we’ve compiled some of the most important articles and suggestions for new videographers together on our web page. Check out the Tips to Get Started.

Video has become an important part of our society – not just in the form of television, movies and entertainment, but also in the recording of ordinary, every day life. Getting into video can be very simple and inexpensive, starting with something as unsophisticated as a cell phone camera, and progress upwards from there to multi-million dollar Hollywood blockbusters. If you have an idea, and the drive to make video, that’s more important than any fancy equipment.

Now that you have this fancy camera, you might be at a loss as to what your first magnum opus should be. Here are some ideas:

A. Make a video letter & send it to a friend or relative who lives far away. Give a tour of your house or neighborhood, show off pets, or artwork.

B. Make a video showing how to cook your favorite food and upload it to YouTube.

D. Ask your parents to talk about the day they got married or when they met.

E. Ask your grandparents about their favorite movies growing up and what they remember of their childhood.

G. Record an unimportant event. Many times in years to come the things you’ll find yourself most interested in are the informal times you’ve captured. BBQs in the back yard, people just sitting on the sofa and talking about current events.

H. Adapt a work of literature. How about getting the family together with some costumes from the closet to do their own version of The Fall of the House of Usher? Write a script, come up with props, assign roles and go for it.