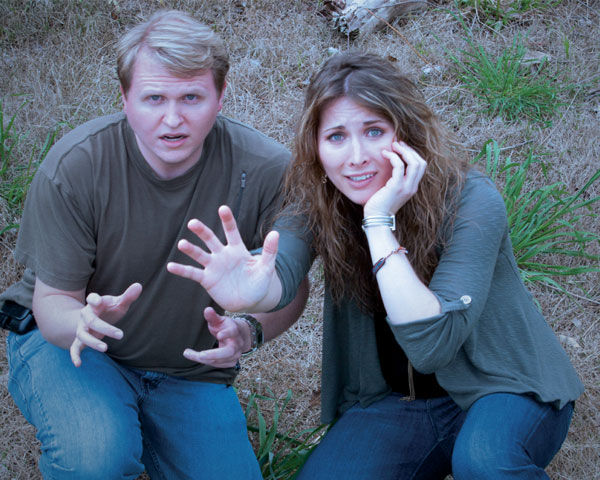 A young couple walk hand-in-hand into a lonely alley, giggling… then… they stop…they both look at the camera in horror, and their gaze moves up, and up, and up – far above the camera and then they scream. Cut to a giant scaly eyeball. What happened? Anybody who watches movies will tell you that some unlucky city is about to get trashed by Godzilla. Why? Because conventions of motion picture storytelling inform us that when someone looks off camera and gasps, the next thing we see will be “the reveal” – the tension that was built up will be released and we get to find out what it is. Since they were looking up, that eye must belong to something that’s looking down. Implying Reality.

Scene Two: Oakes, our young hero sits chatting with his best friend, Sawyer. “Where’s Olivia?” he asks, “Oh, she went down to the swamp about an hour ago,” Sawyer tells him. “The swamp?!” Oaks leaps up and runs out the front door, we hear a car engine burst to life followed by screeching tires and gravel. What happened? Our hero got into a car and drove off in a hurry. In both scenes objects and events were implied. We never saw a 300-foot lizard, and we never saw a car, but by giving us one piece of information and juxtaposing it with another, the movie makers allow the audience to fill in the gaps. Our minds will paint a visual picture of the hero’s car by the sound of the engine and they’ll fill in a giant monster from that one eyeball. 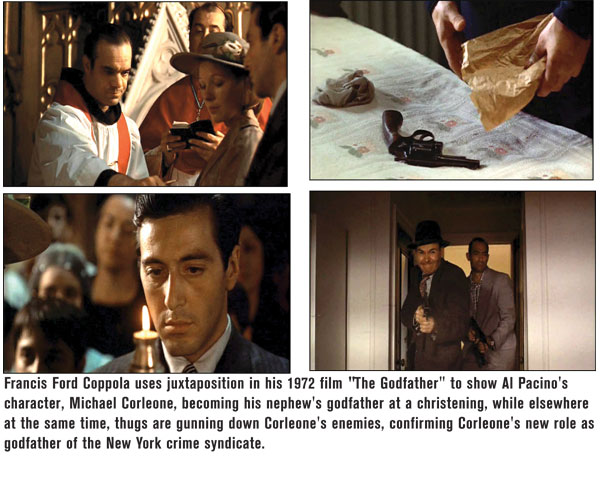 Juxtaposition is often thought of as the process of putting two things side by side so that they can be compared by the audience. The classic example is the baptism scene in the 1972 Francis Ford Coppola film, The Godfather, where mobster Michael Corleone, played so well by a very young and recently discovered Al Pacino, has his enemies brutally wiped out while he himself is at church attending a christening. The juxtaposition is that he is becoming “Godfather” of the New York crime syndicate as well as of his nephew, Francis Rizzi, (actually played in the movie by Francis Ford Coppola’s newborn daughter, Sofia). Coppola’s juxtaposition is a lot more complicated than off-screen car engines or lizard eyeballs. The Godfather is essentially about the transition of a character from good to evil, and Coppola balances the entire storyline on that fulcrum. It’s the turning point where Michael Corleone is able to accept the contrary positions of good family man and brutal mob boss without conflict.

Why do this? Why not show the whole city-crumbling reptile? Why not show the car racing off? There are lots of reasons that a director might not want to show something happening. Coppola’s reasoning was to make a series of subtle comparisons and show the evolution of a character. But there are plenty of other reasons. A director might not be able to afford a giant lizard for one, or not prepared to show it yet. A director might want to keep the action focused on one area to tell the story visually there while filling in other parts with audio.

When to use Juxtaposition

If you can’t see it. How do you show that a character is hungry? Since it’s difficult to actually see hunger, you can have a character look longingly through a window at diners in a restaurant. Since it’s difficult to see grief, a character can be juxtaposed with photographs and mementos like wedding rings, or gravestones. A shot of someone walking alone down a street juxtaposed with revelers on a balcony above can suggest loneliness.

If you’re making a joke. During the Trojan Rabbit scene in Monty Python and the Holy Grail a French knight listens at the wall of a castle while the sounds of hammering and saws come from the forest. These change to the sounds of power tools, something King Arthur, without electricity of course, would never have. We’re left to imagine the knights of the round table wielding chainsaws while wearing armor. 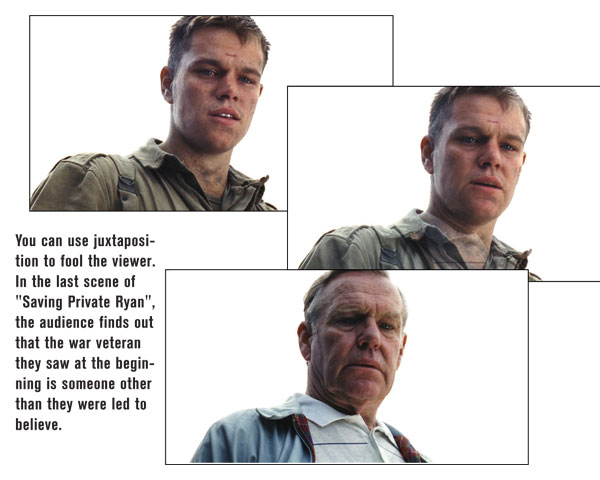 If you’re trying to fool people. Viewers are easily led to believe things because the conventions are so ingrained on us, something director Steven Spielberg used to his great advantage in the opening scenes of his 1998 war epic Saving Private Ryan. An octogenarian war veteran visits a graveyard in France and looks down at a grave. The scene then cuts to Tom Hanks in the battle on D-Day. The juxtaposition tells us that the old veteran is Tom Hanks returning years later to the scene of the battle to visit the tomb of a fallen comrade – and we believe it, because that’s how juxtaposition works most of the time. The audience is doubly shocked then at the film’s end when Tom Hanks’ character is killed by a German sniper. The film ends with the proper juxtaposition – the face of a young Matt Damon fading into the face of the war veteran we saw at the beginning of the movie.

If you want to build suspense. Tom and Martha are watching television on a dark and stormy night. Martha goes to the kitchen to get some popcorn. As the camera stays on Tom we hear the sound of breaking glass and then silence. What’s going on? The information void causes our minds to begin speculating.

If you can’t afford it or don’t have time. Juxtaposing sounds or symbolism can be a great way to get around what might be difficult filmmaking. Stanley Kubrick saved a lot of aggravation by replacing the aliens in Arthur C. Clarke’s short story The Sentinel with a black monolith when he made his classic 1968 film adaptation 2001: A Space Odyssey. Similarly, there are times when a director prefers something to stay unknown, such as the never-revealed contents of the mysterious suitcase in Quentin Tarentino’s 1994 film Pulp Fiction. In fact, unrevealed items in films are so common that there’s a Wikipedia page about unrevealed items.

A “motivated action” is a classic method of suggestion that is triggered by the action of subjects in your scene. When someone points upward and utters that classic line, “Look! Up in the sky…” you know that the next shot might possibly be Superman flying – but whatever the subject, it should always be a shot of something high that one could assume is what they are pointing to. This is an easy way to move the picture along, you don’t actually have to have a camera follow the person’s pointing finger upward to reveal the subject. You just make a cut.

Another example: you trek to your local wildlands and shoot a hawk circling as he drifts along the thermals, appearing to be searching for his next meal. Then, a few days later, you are lucky enough to catch a shot of a field-mouse scurrying among the tall grass in the park. By putting the shots together, you’ve created a motivated edit – hawk hunts mouse – yet no one knows these were shot at different locations and times.

From now on, every time you watch a movie or TV show, be aware of scenes of juxtaposition. How is the director using visual and aural clues to further the story, what and how are they making you assume? And most importantly – why are they doing it? Thinking about how techniques add to a final product is critical in using the tools you have to create the best video you can. Using juxtaposition, motivated edits and leading actions are very powerful visual story-telling tools. Do you have any examples of great juxtaposition shots or admired some that were used in a movie? Bring it up on the Videomaker forums, we’d love to hear about it and open a discussion on it.