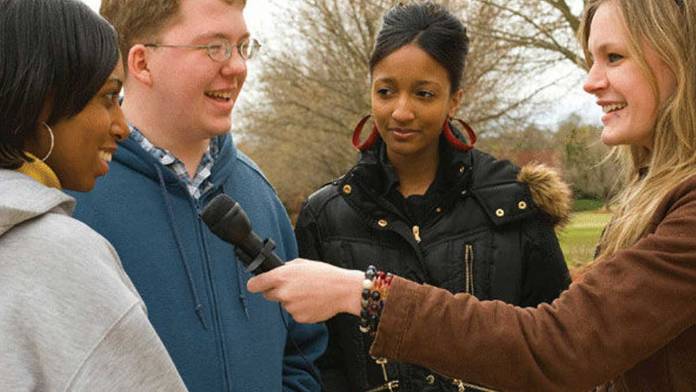 There are different types of interviews and different ways of setting them up. The Oprah Winfrey show is different than 60 Minutes which is different than the Nightly News. Let’s take a look at several different interview styles, what they work best for, and how to prepare for and use them in your own work.

Certain types of interviews depend on complete spontaneity – a reporter with a microphone doing “man-on-the-street” interviews where they stop passers-by and ask for an instant response to a question. This works well for getting a quick sample from somewhat random people, but it doesn’t work at all for some things. Compare this to and interview between a presidential candidate and a major news anchor. For weeks before the interview, the candidate and his advisors will carefully prepare responses to every question they think it’s conceivable the interviewer would ask, and the interviewer will also spend a large amount of time researching current topics to the most relevant questions they can. Both the interviewer and the subject are prepared and usually have a general idea of how the interview will progress. We also expect that this interview will have perfect lighting and perfect audio in a studio, office or well-planned location with the perfect background.

We also expect that this interview will have perfect lighting and perfect audio in a studio, office or well-planned location with the perfect background.

When doing a prepared interview there’s always more time available for you to set up equipment because you know several critical things – namely the where and the when. When chasing a disgraced CEO up the steps of the court house shouting “How much money do you have in your offshore accounts?” there isn’t the time nor the facility to set up lights, to pre-focus and to attach a lav mic to the subject. You maybe put a light on your camera, make sure your batteries are charged, and go for it.

How to Prepare for a Spontaneous Interview

If your assignment is to try to catch a celebrity and get an unscheduled interview, (this is often called an “ambush interview” even when you’re a wedding videographer getting reaction from people at the reception), there are some things you can do to increase your chances of getting usable footage.

Research: Find out the where and when as far in advance as possible. Do you know that your subject is scheduled to make a court appearance? Will they be walking down a red carpet? Arriving on an airplane? Getting out of a limo? Arrive early and survey the area – are there things to watch out for? Noise in the background? Alternate entrances your subject may use? Are there people there who may know more about the scene? Other videographers? People who live nearby?

Be Polite, be firm: Very often “no” means that you just haven’t asked the right person. Bob Woodward, one of the journalists who broke the Watergate scandal said years later that the phrase that worked best in getting people to talk was “I need your help.”

Be Prepared: It would be great if you get to ask ten questions, but plan for only getting one, try to make it one that hasn’t already been answered. “Do you like your new movie?” is a question actors are asked and answer all the time. “How does this movie compare with your favorite childhood films?” is more unique. Someone on trial for bank robbery probably isn’t going to blurt out a confession on the courtroom steps because you shout out “did you rob the bank?” but they may have something to say to a more practical question relating to their experiences with the trial.

Setting up for a Prepared Interview

Depending on what you want your final product to look like, there are a number of different things to take into consideration when setting up your lights and camera. Will the interviewer be in the shot? Will the interviewer be audible to the audience? Will it be shot with multiple cameras? Will the subjects be seated, or moving? Will you be able to stop during the interview, move cameras, or re-ask questions?

Who’s Asking Who What Why?

Interviews can be held for a number of purposes – some of them might be:

1. To find out information that your subject might not want to divulge

2. To find stories and anecdotes that will entertain an audience

3. To create a historical record

4. To help the interviewee get information across

Interviews are usually considered either “soft” or “hard”. A soft interview is one where both the person doing the interview and the person answering the questions have similar goals, which may be to promote a book, introduce a person to an audience, or honor a bride and groom. “Hard” interviews are ones where the interviewer’s goal is finding out something, usually news, and the subject may have a different agenda. (such as covering their company’s liabilities). This doesn’t mean that a “hard news” interview is an unfriendly interview, but it may ask tough questions. The subject and the interviewer may decide beforehand the scope of the questioning (“Senator Smith will do the interview, provided no questions are asked about the incident in the cake factory.”)

Interviews can be set up in a number of ways:

1. Both interviewer and subject visible in camera shot

2. Interviewer not visible, but heard

3. Interviewer not visible and not heard

Having both the subject and the host in the shot doesn’t have to be “talk show” style, it can be two people walking down a road, or sitting on a bench. This style of interview is often used when the host is part of the interview’s selling point because of their position or reputation. (Think Oprah.)

The host can also be off camera with a steady shot of the subject. You can cover this with one camera by shooting “reaction” shots afterwards. When the interview is over, turn the camera on the host and have her nod, frown, listen patiently, and then repeat one or two questions, this will give you some cutaways and keep your interview from being a single, static shot. It also gives you the option of cutting out some portion of the interview during a long reply.

Sometimes also, common in documentaries, the person asking the questions is neither seen nor heard – this requires the collusion of the subject along with open ended questions such as “Tell us about the early days of the band” which will give the subject room to talk at length. In the editing room, these longer answers can be woven into a narrative of the subject’s own words.

“Remote” interviews are typically done by TV stations with the use of satellites bouncing audio and video between locations but there’s no reason you can’t do a remote interview on the cheap with the aid of an accomplice with a telephone and a video recorder. Your subject can even wear an “in the ear” type of telephone receiver to avoid having someone relay the questions. Need to interview a baker in Sausalido for your documentary but don’t have any friends there? Try online resources like craigslist.org to locate a camera operator.

Some interviews have to be done live, you don’t have a choice. But others can be edited – this gives you the opportunity to stop, go back, and re-ask or re-answer a question. You can tell your subject “if you get off track on an answer, you can just stop, pause to give us some space in the editing room, and start over.”

Regardless of the type of interview you’ve chosen to do, some things remain the same:

1. Do your research. Start with the subject. Authors, actors, and business people often have prepared biographical information that you can start with. Don’t read from it, but use it as a jumping off point.

2. Keep your subjects calm and happy. Meet with them before the interview, explain what’s going to happen, where they’ll sit, who the other people on the set are. Put them at ease.

3. Start out with easy questions. These are often called “low balls”, questions that are easy for your subject to answer well and will get them into the swing of the things.

4. Avoid questions that can be answered “yes” or “no”. Instead of asking “Is it hot in Florida in July” ask “Compare the summers in Florida to the summers in Maine, where you grew up.” This invites your subject to tell parts of their story that you might not know about and opens up a conversation, providing more avenues to explore.

“Three point lighting” or some variation of it is very common for interviews. Advantages of artificial lighting are that it can be recreated in different locations and isn’t dependent on the weather. Natural lighting is often nice and can add a softer touch – placing your subject by a large window or in a shaded area outside. You can use a single reflector to throw a little extra light onto your subject. Watch out for hot-spots (over exposed areas) in the background and don’t be afraid to set your exposure manually.

Sometimes you have no choice but to use whatever horrible light is existing. Remember to set your white balance and look for features in the room such as reflective walls that may lessen the worst parts of the existing light. Sometimes and on-camera light can be used just as a fill in conjunction with existing over-head lighting. Videomaker magazine has dozens of stories on three point lighting, a little research here can also help your interview tremendously.

While watching television now, pay careful attention to interviews. How many cameras were they shot with? Were they done live, or edited later? What types of backgrounds and lighting were used? How did the video team utilize available space? Listen to interviews on the radio as well – how were questions formatted? How long are they compared to the length of the interview? How many were biographical and how many factual? What techniques does the interviewer use to put the subject at ease? Paying attention is the first big step to understanding. If you incorporate interviews into your video work, post them to the Videomaker forum, we want to see what you’re doing.