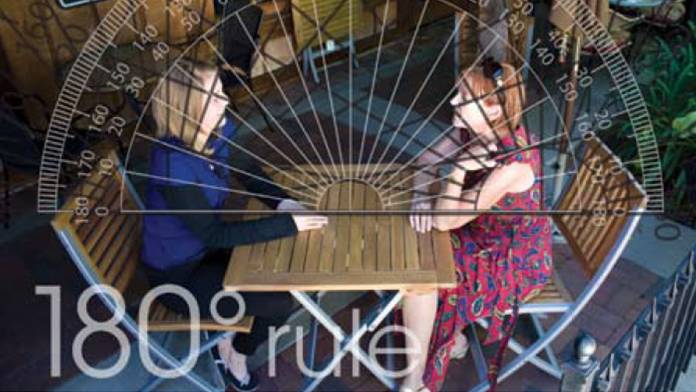 The master producers follow an established set of rules for a reason – to move the story along in a logical way that won’t confuse the viewer. There are many things that we “know” about movies simply from having seen lots of them. We “know” for example that when the camera pans across a vast expanse of city and zooms in on a sign on a building that says International Widget, that the action that takes place after the cut is happening at International Widget. There are a number of rules we all know subconsciously even if we’ve never been told them. The 180 degree rule is one of them. The rule states simply that when filming (or videotaping) two elements (people, cars, armies, sports), the camera should stay within a 180 degree field and not “cross the line”.

Viewers map out the logistics of a scene in their heads, we take subtle clues from the screen and use them to build a visual representation of the spacial relation of the objects we’re seeing.

Close your eyes and see if you can imagine the layout of the Brady Bunch house or another building from fictional television, do you know which rooms are to the left or right of others? Chances are you do, even if the actual sets aren’t anywhere near one another, because the movie makers have spent some time trying to make you comfortable and let your mind interpret a reasonable geography. The 180 degree rule is one of those things that keeps viewers comfortable by establishing where people are in a scene, including the viewer. 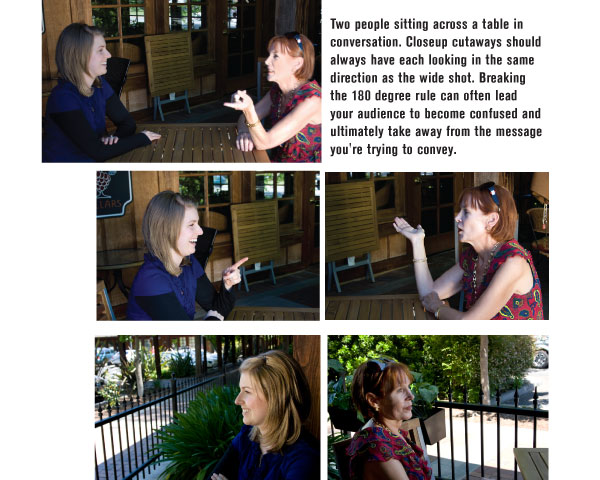 Let’s imagine a very simple scene two people sitting across from one another at a coffee shop, having a conversation. The 180 degree rule tells us that one person should always be facing camera left and the other should always be facing camera right. This is a visual clue as to who’s talking. Imagine if close ups showed both of the characters looking to camera right the immediate visual assumption would be that they were talking to someone else, off camera.

The 180-degree rule is important even in scenes that have a single person – imagine a character saying “I’m going to the store” – we cut to a shot of her walking right to left and then cut to a shot of her walking left to right – the implication is that she’s headed back, she’s either been to the store, or forgotten her car keys. Simply deciding where to put the camera has given us a shortcut – we don’t need a store, cutting back and forth tells the viewer that they’ve been there. 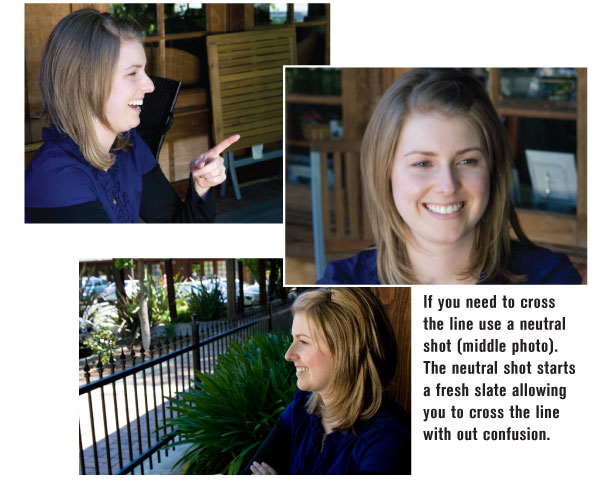 Sometimes, for whatever reason, your camera really needs to cross that line, maybe to reveal something to one side of your talent or even to hide it. Imagine you’ve spent all morning shooting two people sitting at a table in the park having a conversation, one always looking right, the other looking left. You go to lunch and upon your return discover that a gigantic band of scene stealing protesters waving “down with widgets!” signs have taken up in the park right behind your actors. You need to move the camera to the other side to keep them out of the shot. Luckily, this isn’t a problem – you can cross the line if you put a “neutral shot” in between – a neutral shot is one from head on that is neither right nor left. So you do a closeup of one of your actors, then, bang, you can cut to the other side and your audience won’t become dizzy or terribly confused. The neutral shot serves to wipe off the memory map they’ve drawn.

Can You Break the 180 Degree Rule?

Like any rule, the 180 degree rule can be broken, but like many rules, it’s there for a reason and you shouldn’t go crossing it willy nilly. What’s a good reason? One is to confuse the audience. Imagine our heroine is being hunted by a dangerous and deadly spy. We show her walking left to right – and wait! We cut to the spy, walking right to left! Our brains understand this to mean that they’re on a collision course! We cut back and forth, our heroine walking obliviously, stopping to pick up an Evansville Times Picayune, stopping to smell the flowers, petting dogs. The spy, still walking right to left sees something, he walks more quickly! Catastrophe is at hand! But now we zoom out to reveal, the Eiffel Tower. The dangerous spy isn’t even on the same continent! Our heroine is (for the moment) safe. We’ve fooled the viewers by violating the 180 degree rule.

The 180 degree rule is something we all understand subconsciously – we know when it’s wrong, but maybe not why. Recognizing what it is and being aware of it will keep you from making a simple mistake that would puzzle and unsettle your audience. Add it to your visual vocabulary, be aware when it’s used or not used in movies and TV.

Sidebar 1: Drawing it out

Hollywood directors hire someone months before shooting to draw out how every shot will look including the frame lines and the direction things will be moving in. This process is called “storyboarding”. It’s done because it’s very expensive for a director to be on the set trying to figure out where to put the camera while thirty union employees stand around looking at one another waiting for him to make up his mind. Independent videographers usually do most of their storyboarding in their heads, but as an exercise, draw up a diagram showing the locations of characters, and then draw a line through it then look at the places you can put your camera.

Can you move your camera anywhere in that 180 degrees? Yes. Up, down, left and right, like half of a grapefruit. But keep in mind the corollary to the 180 degree rule, which is the 30 degree rule. This tells us how far we must move the camera to avoid a jump cut. Jump cuts also jar the audience by breaking a visual sense of propriety. Though they’re very often used stylistically, to give the impression, for example, that the footage is “documentary” and not staged. Makes you wonder if you should keep a protractor in your camera bag, doesn’t it?