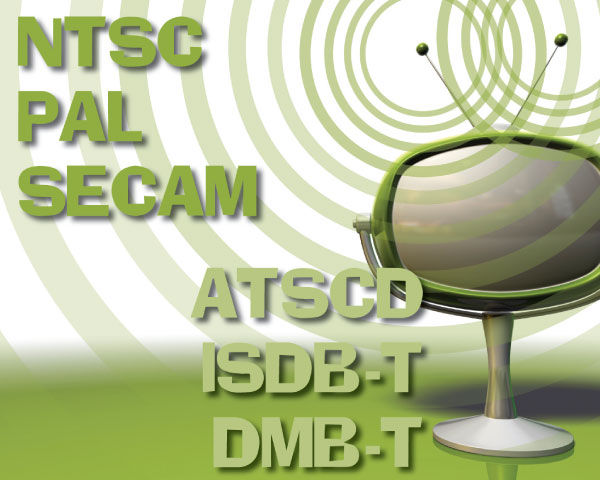 The method by which the video gets from the TV station to your screen is governed by a series of transmission formats. In the same way that the U.S. Postal Service’s letter format tells you to put your address in one place, the lines in a particular order, a stamp in another place, etc., television transmission formats dictate the method that a video image will be broken down and sent out over the air. While it’s relatively easy to send a letter to another country, a multitude of television transmission formats make it much more difficult for signals to be received from country to country. This is often the result of innovations, like color, high definition and stereo sound, that make television better.

You’d think that people would always want their TV signal to improve, but this isn’t true. While everyone does want a better picture, what they’re primarily concerned with is that nothing changes – most people just don’t want to upgrade their television set every three years.

In the 1940s, commercially available sets ranged anywhere from $400 to $2000, out of reach for most, then factor in the significant amount of money that it would cost a television station to refit. So innovations engineers often found themselves with the difficult task of trying to add features in a way that would still allow the legacy technology to function. Later, innovations like cable and satellite brought their own difficulties, which different people handled differently. Let’s look at a few of these formats.

Television Transmission Over the Air

For nearly half a century, the primary method by which people got video was from broadcast stations – big tower on a tall building, antenna on your roof, etc. These early formats were all analog, but more recently, television stations have been broadcasting in digital – sometimes in conjunction with a legacy analog broadcast.

NTSC is the American format most of us are familiar with. It was developed in the early 1940s. The Acronym stands for “National Television System Committee”, which was a group created by the FCC (Federal Communications Commission) to come up with a standard for broadcast television transmissions. It defined the now-familiar 525 alternate scanning lines of vertical resolution, as well as the aspect ratio. The standard was changed a decade later to allow for color broadcasts to still be viewable on black and white sets. It was used throughout North America. After years of faithful service, it was replaced (as a broadcast standard) in 2009 when America went to digital service.

PAL, (Phase Alternating Line) is the broadcast format used in Australia, western South America, about 74% of Africa and most of Europe. It was developed in the 50s and 60s as an alternative to the compromises NTSC had to make to allow color and black and white sets to both receive the same signals.

SECAM (Séquentiel couleur à mémoire) was another attempt at adding color to a black and white signal. It was developed in France in the 1950s and came into use in the late 1960s in France as well as Eastern Europe.

In the United States a big change came in 2009 when the broadcast television infrastructure was switched from analog to digital. The rest of North America will follow the switch in the near future (Mexico in 2021 and Canada in 2011.) Europe has been broadcasting in digital for more than a decade.

ATSC replaced NTSC in the U.S. in 2009. This high definition format changed the aspect ratio from 4:3 to 16:9, increased the number of pixels, and added surround sound. ATSC is incompatible with older NTSC TV sets and equipment, however ATSC to NTSC converter boxes are available.

DVB-T (Digital Video Broadcast – Terrestrial) this open source European format was first used in England in the late 1990s. Several sister formats exist, such as DVB-H for handheld receivers and DVB-IPTV for data sent over IP (Internet Protocol) as well as separate formats for cable and satellite.

ISDB-T (Integrated Services Digital Broadcasting – Terrestrial) Japan began broadcasting in ISDB-T in the early 2000s. This high definition format was based on the HDTV format developed twenty years before by the Japanese company NHK. Other versions exist for satellite transmission (ISDB-S) and for cable (ISDB-C). ISDB has an interesting compromise copy protection built into the standard that will allow users to copy the file once.

DMB-T (Digital Multimedia Broadcast – Terrestrial) is primarily used in China and started in 2007. The DMB-T format allows for data to be sent at lower power than most other digital TV formats, allowing a DMB-T tower to transmit more efficiently to cover the same area as a comparable tower transmitting, say, DVB-T.

Television Transmission Through Cable and Space

Cable and satellite present their own advantages and challenges that need to be addressed when creating standards. Cable needs to be physically tethered from the broadcast to the receiving television. Satellites, if you think about it, are basically extremely tall broadcast towers. The reason that TV stations put their antennas on tall towers is that the transmitting and receiving antennas must be in the same line of sight. Because the Earth is curved (trust me, it is), the Earth eventually gets in the way and blocks the signal. By relaying to a satellite, you increase the line of sight drastically. But with that line of sight comes lots of TVs that can see you.

Television Transmission In The Future

Innovation in television isn’t going to stop. If anything, as people move from traditional broadcast televisions to watching video on computers, things like higher resolution, 3D and even interactivity may be added to formats down the road. Computers make smarter receivers than the old tube television sets, because they are software-configurable. It’s likely that even more formats will appear, at a greater rate. Keep an eye on Videomaker for more information about them when they happen. See for our associated story “Codecs” in last month’s issue or online at:
www.videomaker.com/article/14743/