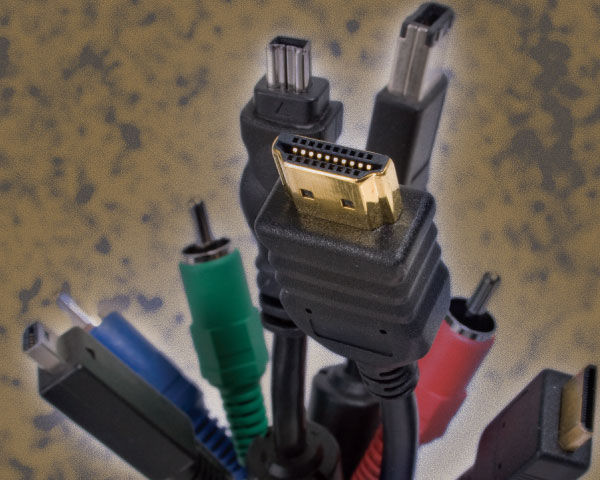 If you’re like me (and I sincerely hope, for the sake of your friends and family, you are not), you have a large cardboard box under your desk filled with all sorts of cables. Some of these are obvious, like stereo mini plugs to mono RCA, USB cables in a dizzying array of ends and about 60 power cables, some of which have huge transformers on them, but the bulk of which came with various computers, monitors and printers you’ve bought over the years and cannot be compelled to throw away. There are also, more likely than not, a few cables where you have no idea what they are or what they’re supposed to do. Sometimes these are extra cables that came bundled with a camcorder or peripheral, some are probably legacy formats that aren’t widely used any longer, but you can’t throw them out because, hey, you never know when someone’s going to give you a dot matrix printer and you’ll need an RS-232 cable to use it.

This month we’re going to take a look at connectors. Maybe it’ll help you sort through that box and figure out what to keep and what to… aw heck, I’m still going to keep them all: RCA, BNC, XLR, USB and “all those other guys.”

Are probably best known as the connector used with portable headphones and connecting computer speakers. The plugs can be either mono or stereo. The stereo plugs have a thin insulator dividing the shaft in half so that it can carry two separate signals. Some camcorders use a version of this plug with two rings that allows three signals (audio left, right and video) to be carried.

1/4-inch connectors look very much like miniplugs, but they are much larger. They’re commonly found on guitars and more robust headphones. 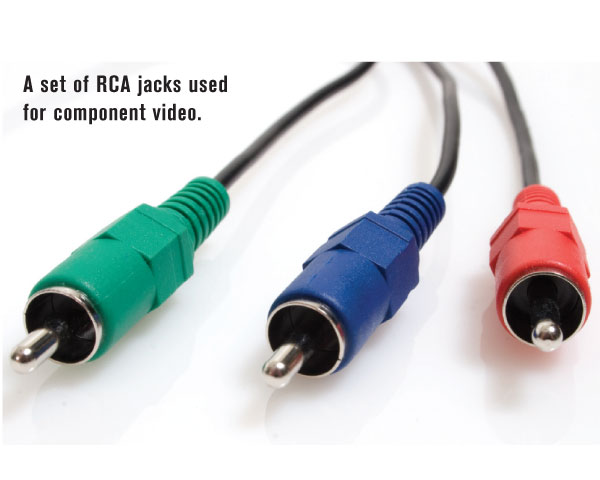 Bayonet Neill-Concelman are named after Paul Neill of Bell Labs and Amphenol engineer Carl Concelman. BNC connectors have a twist-lock mechanism that keeps them from coming unplugged if wiggled or kicked. They’re used with some types of coaxial cable and are most widely associated with SDI, HD-SDI and professional-style analog video connections. For a time BNC connectors were used on computer network cabling, making them very common. (F connectors are used with the type of coaxial cable used for TV reception applications, such as rooftop antennas, cable TV and satellite hookups.)

In the mid-1990s, a new type of cable connector showed up which was radically different from anything else being used – USB. The cable is unusual in that it can’t be plugged into itself – each end has a different type of connector. Rather than male and female varieties of the same connector (like RCA or 1/4-inch), USB cables have A connectors at one end and B connectors at the other. This added complexity is because, along with carrying data, USB cables supply power, and the different connector types keep two devices supplying power from being connected to one another.

Having a powered connector meant that USB devices could charge by connecting to a computer, making way for devices like PDAs, phones and even USB flashlights.

Its widespread use and the rapid miniaturization of devices resulted in a baffling number of USB connectors, and no doubt many of you have sat with a box of cables, pulling out various USB connectors and poking them into the side of a camcorder or PDA, trying to find the one that fits.

These are the connectors that come from the power source to the powered device. They are flat and half an inch square.

Plug these into the device being powered. There are several of these. The standard type B is a six-sided tube, shaped somewhat like a loaf of bread. B connectors also come in mini and micro, as well as a host of proprietary versions.

Many companies use some proprietary variant of USB, such as Apple, which has a custom USB connector for its iPhone and iPods, but they announced in June 2009 that they will be adopting mini USB, allowing multiple devices to share the same chargers. 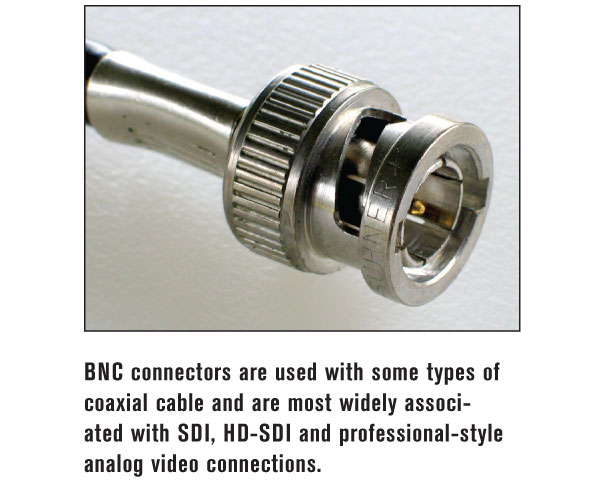 The types and numbers of cables you’ll amass as a video producer will eventually catch you off-guard. Mark our words: sooner or later, you’ll find yourself with a few plastic tubs full of cables that, when you see them, will take you on a trip back in your mind, reminding you of old equipment you used in the past. Use this time to reflect on how much easier it is to edit video now, versus how many more hoops you had to jump through back in the bad ol’ days. It’ll surprise you. It’s surprised all of us old-timers more than a few times before.