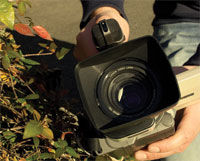 Are you looking for a fresh new angle to spice up your videos? Well, perhaps the perspective you seek is right at your feet, or at least in that general neighborhood. We’re talking about getting down with your camcorder and shooting up. You’ll be pleasantly surprised at how this can really give your scenes a refreshing look and a totally new point-of-view slant.

Let’s face it: most of your shots are at eye or shoulder level, either handheld or tripod-mounted. OK, so occasionally you’ll do an elevated shot or maybe even a crane or jib shot, but the vast majority of the time you shoot from a straight-on perspective, right? Well, that’s OK, but you can add the unexpected angle to help break up the monotony and give things a different look. It’s easy to do: you really don’t need anything additional in the way of equipment, and all it takes is a bit of creative thinking outside the box. Let us explain what we mean a bit further.

Low angles are useful for lots of different scenarios. You can use a low-down wide angle for an establishing shot, you can use a low angle for a cutaway, for an approach or a departure shot, for a facial shot during a narrative – well, if you think about it, you can use these lower-than-normal perspectives for just about any kind of situation that you’d like to capture in a new – and often – unexpected way to give your videos a really different look for some scenes.

To get these low-down shots, all you have to is position the camcorder lower that you’d normally shoot from – the lower the camcorder position, the more dramatic the effect will be. We’ve found that small, tabletop tripods can be very useful, and we’ve also used sand-filled pods for our low shots. The pods are especially useful for roadway shots when shooting an approaching or departing vehicle. You can also hand hold the camcorder from a kneeling, crouching, sitting or prone position to get the desired perspective – whatever works best for you is the best way to go.

It’s also important to remember that there doesn’t always have to be a lot of action taking place when you use a low-angle shot; indeed, they come in very handy for those cutaways and transition shots as well. For example, say your two actors have just said goodbye and, as we see one of them get in the car and drive away, you transition to a low-angle shot of the other one looking on at the departing car. Drama. Nice. Different. That’s what it’s all about, isn’t it?.

How about capturing something fairly mundane in the scene from a low angle to break things up? Let’s say, for instance, there’s a dog in the scene, and someone has just given him his bowl of food. While you can use a “normal” shot of him chowing down as you hear your actor’s dialogue in the background, using a low-angle shot of the dog with his muzzle in the bowl gives things a look from his point of view, often called a POV shot.

Low-angle shots are also very useful to make scenes that are otherwise unremarkable (although necessary for the sake of continuity) more interesting. As an example, let’s say that the scene calls for your actor to retrieve an important letter from the mailbox. Sure, you can show this action from a normal point of view, but wouldn’t it look a bit more interesting if you shot it from a low angle, lingering for a few seconds as he/she looks at the envelope contemplating it or a beat or two? Just plop the camcorder inside the box, and tilt the lens up slightly using a wedged doorstop or even a wedged clothespin.

Thanks to the diminutive size of most camcorders, you can position them in all kinds of locations for which you couldn’t use larger-format cameras. This makes them ideal for all kinds of creative positioning to give you lower-than-expected shooting angles. How about in the engine bay under the hood of a car, shooting up at your subject – perhaps adjacent to a bomb? The camcorder is the tool, but it’s your imagination and creativity that make the shot interesting, and, of course, the perspective.

Another good example of a good low angle perspective is when videotaping children. They look so angelic when shot from above, but shooting at their eye level gives the viewer a sense of life in a child’s world.

While we’ve touched on several points here to give you some ideas for low-angle perspectives, don’t be afraid to experiment. Low angles shots are often easier than high angles because you can sit down, rather than try to raise a camera over your head. We often shoot the same scene from several different angles, and we use low angles frequently. While they don’t always work, you’ll be happy to have them “in the can” for those times when a low-angle shot is just the ticket.

Tom Benford has been writing articles about video, photography and filmmaking for more than 30 years.

Side Bar: Who’s the Boss?

A point of view perspective can denote a person’s level on the office pecking order. In the example on the left, the camera is set slightly below the character’s eye level, which makes him look down on a person he might be conversing with. This POV gives the audience the feeling that he is an authority figure, a “higher up”.

The perspective in the photo of the same person on the right has the camera angle above his eye level, which causes him to look upward. This places him in a more submissive position, and psychologically conveys the feeling that he is a subservient member of the office.