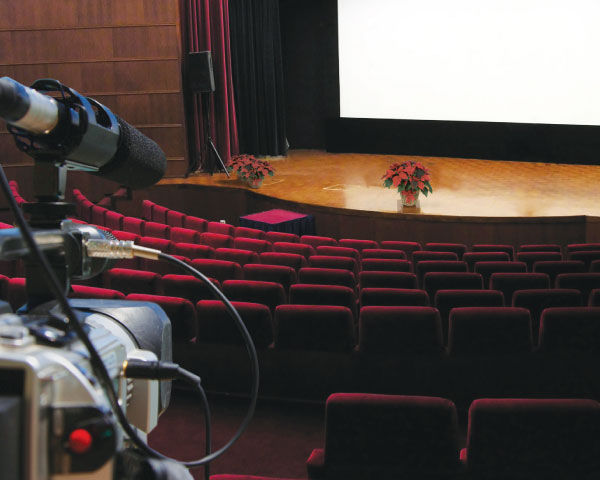 You might think “Photographing a play or recital is easy – you just put the camera on a tripod and sit down,” and you’d be right, in the same way that you could say “sewing is easy, you just push the needle through the cloth.” Recording a play is pretty straightforward if all you want to do is provide evidence that it took place. Creating a video of a play that people will enjoy watching is something entirely different.

If you plan to shoot some holiday pageantry of the kids or family, or if you’ve been hired to shoot the program for someone else, all the better. You just might be capturing that event for years to come, and it might be “the” video that is played year after year by family and friends of the performers during the holiday season as often as A Charlie Brown Christmas or Miracle on 34th Street. The pressure is on, are you going to give them the usual ho-hum back-of-the-theater wide shot, or a truly magnificent piece that they’ll cherish every time they open that DVD box and insert that disc into their player. 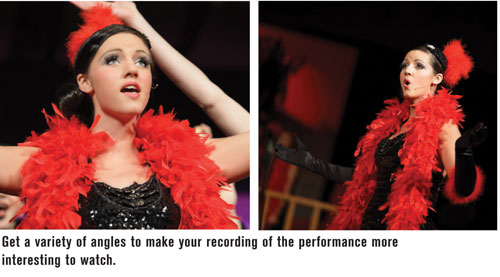 Why watch a play or go to a musical performance, consigned to a single view, instead of watching a movie or listening to a record? After all, a movie can bring you views that a play can’t possibly – different camera angles, special effects, the worlds greatest actors, with incredibly high fidelity sound (in six channels)! But still people go to live events and are moved by plays and live music in a way that movies can’t duplicate. Why is that? There’s just something about being there, about seeing the actors in three dimensions, of feeling the proximity to the people on the stage. No, there’s nothing that equals seeing a live performance, but there are some things you can do to bring your viewers as close as possible to that experience.

The More Time You Spend on It, the Better It Will Be

The one great truth to shooting a stage performance is that the more work you put into it, the better your outcome will be. The absolute bare minimum, putting your camera on a tripod and turning it on will give you a record of the event. Shooting multiple performances with a mixture of wide and tight shots and then editing it together will give you a significantly better final product, but it takes a lot more time to do.

Don’t just show up with your camera and start shooting. Many directors will be overjoyed at the prospect of getting a professional video of their performance. Ask beforehand (the earlier the better) and you may find yourself with a roped off shooting area, access to electricity, back stage interviews, and other special perks that will make things go more smoothly.

Use a Tripod When Video Recording Live Events

There’s not much that says “unprofessional” like shaky hand-held footage of a stage play. Putting your camera on a sturdy tripod will not only save your arm, but it will make your footage look much better. A fluid head will allow for smooth pans. At the very least, use a monopod.

Use Multiple Cameras and a Switcher

The easiest way to do it, and the one that involves the least amount of post-production work, is to shoot with multiple cameras and a switcher and edit “on the fly”. Ideally you’d have one camera on a wide shot, and one or two other cameras hunting out close-ups and medium shots. However, three cameras, two camera operators and the requisite cables and switching equipment aren’t in everyone’s closet-o’-video-gear. If you can’t use three cameras, use two. If you can’t use two cameras, try and shoot the show at least twice.

Pitfalls of the Single Camera

Shooting a play with a single camera opens you up to a host of problems: Static shots are boring; if you’re moving and following the action you may miss something going on elsewhere; but the biggest pitfall is that left to a single camera, people have a tendency to firehose and motorzoom. Firehosing is when the camera swishes back and forth across the action, back and forth between people who are talking or a conductor and the violinist (like a firefighter trying to put out a burning building) and motorzooming is rapidly zooming in and out. Make your camera movements calculated and resist the urge to put too much movement in them. Zooming should be done sparingly and for a reason. Let the subject’s movement control the action.

B-roll is, of course, stuff other than the main event which could conceivably be happening at the same time. It can be people sitting in the audience (mom and dad looking proud), a close up of a detail on the stage, the conductor from a different angle, etc. Having B-roll means that if you make a mistake during shooting, or you need to change your zoom angle, you can cover it up in post-production.

Set Your White Balance – How? 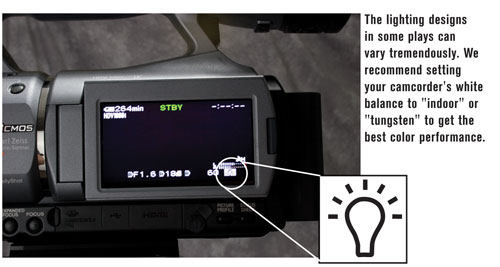 Stage lighting isn’t about accuracy, it’s about mood – and for that reason, you’ll find lights in many unique colors on a stage and the lighting designer might want the whole set bathed in blue, or red, for effect and it may change between scenes. None of this will serve to help your camera figure out what should be white. The best thing to do is use the camera’s preset for tungsten and let it go.

The dress rehearsal (or sometimes two) are where the actors, the lighting technicians, the costumers, the prop-master and the director all get it together and make sure everything works. It’s like a performance, but the director may stop things and go back, or they may try certain parts again at the end. The benefit for you is that it can be more-or-less a private performance. If you’re shooting with one camera, ideally, you could shoot the dress rehearsal from up close with a tripod-mounted camera, getting closeups and medium shots and then a wider shot during the actual performance. Talk to the director before the show about the possibility of re-doing key scenes specifically for the camera so that you can shoot from different angles. Remember to make sure your audio levels are consistent. Shooting the dress rehearsal might even give you an opportunity to get closeups and angles backstage that you might be able to capture during the show itself. 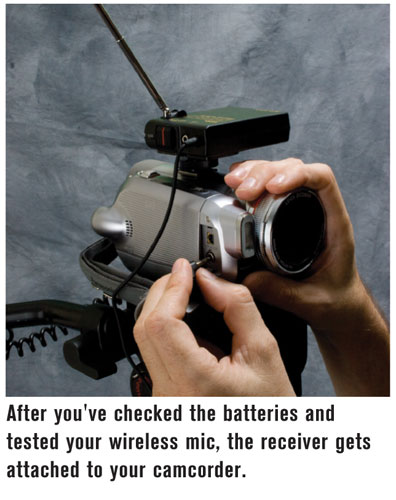 The microphone built in to your camera is OK for audio three feet in front of your camera. To capture what’s happening on the stage and in the audience you need your microphones there. Ideally the theater will already be miked and you might be able to plug into their audio out. If you’re on your own, in the best case scenario you should have at least two mics on the stage and one pointing to the audience to capture their applause. Recording the audio on separate channels will allow you to mix the important parts louder and remove or lower undesired input (you do want to hear the audience clap, you don’t want to hear them cough and open potato chip bags). If you absolutely cannot use off camera microphones, look into a directional “shotgun” mic that you can aim at the stage – this will cut down on unwanted noises from other places.

To do it right you need to get in early and stay late. It’s not an easy task, but it can be an extremely rewarding one, giving the actors and musicians on stage the opportunity to see themselves perform is a rare and wonderful gift.