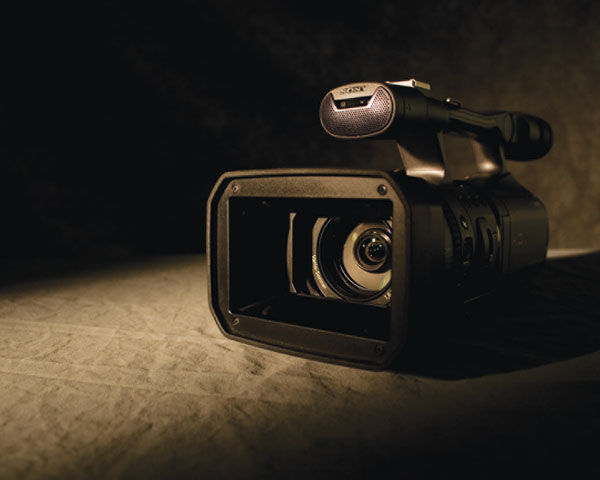 So what do you do if your lights get held up at the airport and now you don’t have any lights? One thing that nearly every videographer hears is that their videos would be so much better if only they had one more piece of equipment. The right equipment very often can save a situation but not as much as clever thinking. The challenge of not having the perfect piece of equipment can very often be the creative push that you need to do something special and out of the ordinary.

Light can either be natural or man-made. Today’s video cameras are so sensitive to light that videographers can shoot in light that would have made the great directors of yesteryear weep, moonlight or candlelight are both viable options. Look at every object that produces light as a potential source for your video. Car headlights – Ridley Scott lit a climactic scene in his 1978 film Alien with a rotating police light, the flashing added to the tension as the set was first lit and then sent into darkness. Jonathan Demme chose equally unexpected but dramatic lighting in the final moments of his 1991 film Silence of the Lambs where Jodie Foster is chased through a completely unlit basement by a villain wearing night vision goggles.

Using the Sun for Video

All video production lighting is an imitation of the sun. The reason that Hollywood doesn’t always like to use the sun is that it’s not completely reliable. It moves, or rather the earth moves around it, so even 10 minutes into a shoot you can see changes on the shadows of your subjects unless you have them constantly moving in conjunction with the sun… not a viable option. Then there’s cloud cover to consider, a completely overcast day is a dream to filmmakers, but doesn’t happen too often.

With artificial lighting you can achieve the same, constant, unchanging light regardless of the time of day or how overcast it might be. With artificial lighting you can make a scene brighter or dimmer by adding or subtracting lights or changing their position. But it wasn’t always like this – Thomas Edison, who invented “moving pictures” as we know them built the first motion picture studio, The Black Maria which involved not only a roof that opened up to let the sun in, but the entire building was built on casters so that it could be rotated as the sun moved across the sky.

Some of the best light is the light you find coming through a window. Light coming inside from the outside is usually diffused a bit, and as long as your subject doesn’t have its back to the window, thus throwing the whole image into a back-lit nightmare, you can use window lighting well.

You simply have to seat your subject two or three feet back, depending on the size of the window, shoot a 3/4-angle from the side of the window, not directly into it – and this makes for excellent interview lighting. 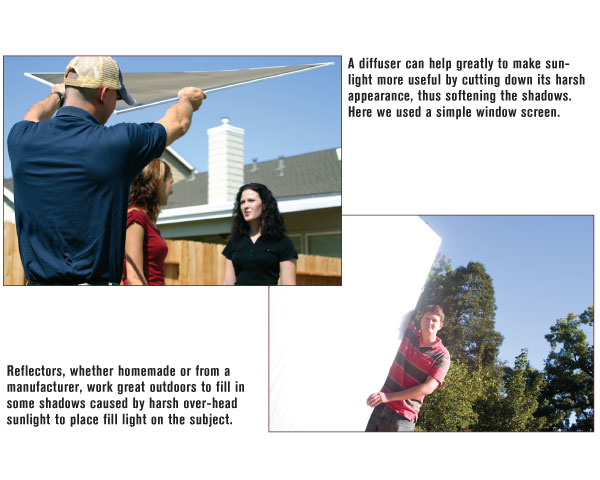 Sunlight can be modified in many ways, first by putting something such as a diffuser between the sun and your talent. The diffuser serves to soften shadows. You can buy diffusers made by companies like Photoflex or Lastolite, or you can make them yourself out of white fabric, such as a bed sheet, stapled to a wooden frame. Even a lightweight window screen held over a subject’s head outdoors will help diffuse the glaring sunlight.

The overhead sun is a harsh lighting source, creating deep, sharp shadows in the eyes. Some of this can be eliminated by the use of a simple reflector. The hardness or softness of a shadow is determined by the size of the source of illumination and its distance from the subject. The sun – look at it up there. Although it’s really big, it’s extremely far away, so it looks like it’s about an inch across. This gives very harsh shadows. Collapsible reflectors are great for controlling this light, and some models come with a gold “warm” and silver “cool” side, often accompanied by a white diffuser. Or you can simply use a large piece of white foamcore or a rigid insulation sheet as a reflector (as the photo above illustrates. The silver is bright, so be cautious). Holding the sheet two or three feet away to bounce sunlight onto their faces creates a secondary source which, in relation, is huge. This even, reflected light will fill in those shadows and create a softer, more pleasing light. 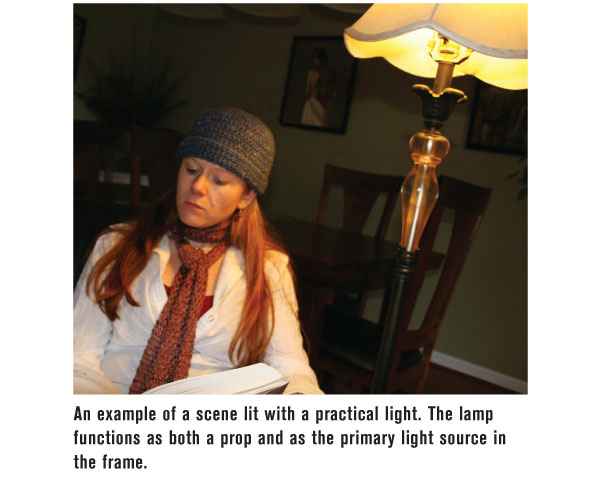 “Practicals” are the movie and video producing term for existing lights. That lamp on your desk or the light in the hallway, they’re “practical” lights. One of the things a lighting director needs to do is balance the existing light with the extra movie lights to keep the scene looking as natural as possible as well as balancing all the different colors, which is done either by replacing the bulbs or by gelling some of the lights. In the absence of additional lighting, one thing you can do is use only practicals. This is a technique used extensively by Stanley Kubrik in both his 1999 film Eyes Wide Shut as well as his 1975 masterpiece Barry Lyndon which featured scenes lit only by candlelight.

Don’t automatically trust existing lighting. Most people don’t understand lighting and as a result, lights in the home are often not designed in a way to make things pleasing but rather to make them illuminated. That overhead light in the living room will probably want some diffusion and other lights or reflectors on the side to keep everybody from looking like zombies. Use the light you find, but keep your aesthetics in mind while you’re doing it. And also, don’t assume that because you have a light that you need to use that light. Maybe the solution is to turn off the practicals and open the blinds.

There are also lots of inexpensive Do It Yourself lighting options rather than spending money on dedicated hot-lights, you can take a trip to the hardware store and make your own lighting out of things like quartz work lamps or banks of 3200k fluorescents.

Unless you’re in a cave, there’s light around, somewhere. Finding that light, shaping it, and using it to your best advantage is one of the jobs of a video producer. Be aware of light constantly, always be thinking of it in terms of how it would work for video. Do you see mix-matched color temperatures? Do you see a way that harsh shadows can be made softer? Does the hard shadow of an overhead bare bulb give you ideas for a scene? Think with a critical eye every day and you won’t be stymied on the set the next time your find out your lighting kit is on its way to Ipanema.

Lights, Camera, Action — “Wait, but we don’t have the lights! How can you have camera and action without lights?!” Well, if you don’t...