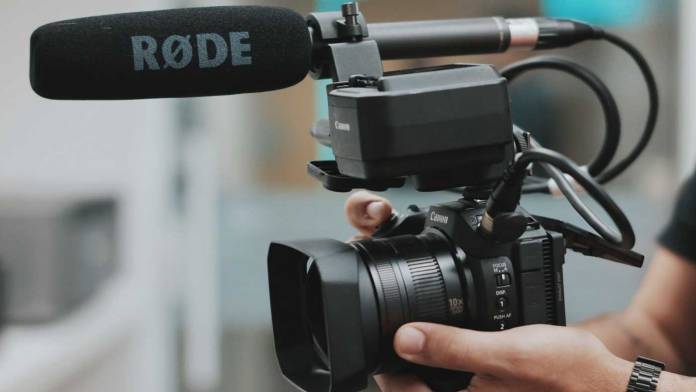 George Lucas likes to say, “Sound is fifty percent of the movie-going experience” – and not just because it helps sell home theater components branded with his proprietary THX Sound logo. Sound is equally important for video producers. On the internet, the small, 320×240-pixel resolution of YouTube and the older codec the site uses make it somewhat forgiving in terms of video quality, but, no matter what the medium, poor sound is an instant giveaway of an amateur at work.

While Videomaker produces an extensive DVD on the topic, called Field Audio, here are some tips to help get you started towards producing the best-quality sound.

Forget About Your Camcorder’s Onboard Mic

The consumer-grade camcorders from the local big-box electronics store can generate decent-enough video for YouTube, particularly if you mount them on tripods and plan the camera moves carefully, but their onboard mics often leave something to be desired. Most of these mics are fine, but it’s their placement to the camera, not the sound source that is the issue.

If the camcorder has a built-in mic jack, by all means use it – anything that gets the mic closer to the subject and away from the whirring machine noise of the camera is a good thing. Alternately, some firms, such as BeachTek, make adaptors that serve as a base for the camcorder and allow microphones equipped with professional XLR jacks to plug into select consumer-grade camcorders. (These adaptors have an additional advantage of stabilizing the camera for handheld shots because of their additional weight.)

If your camera lacks an external mic input, we’ll look at a workaround later in the article. In the meantime, we’ll consider several options for successfully miking on-air talent, including shotgun mics, handheld mics and clip-on lavalier mics, so some experimentation may be necessary to find the approach that works best in your situation. In general, the closer to the talent’s mouth the mic is, the better the sound will be. Shure’s SM93 lavalier, for example, is smaller than a paperclip, so you can easily clip one to a shirt, jacket or tie. A shotgun mic helps to facilitate interviews where it’s impossible or awkward to attach a lavalier to the guest. And a handheld mic such as Shure’s venerable dynamic SM58 microphone can do double duty as both an in-the-field handheld interview mic and a tabletop mic for voiceover duties.

All of these mics have optional foam windscreens (or large furry-looking blimps to encase shotgun mics), which can help reduce wind noise and plosives (popped-Ps), though, in the case of the lavalier, there’s the drawback of making it slightly more visible on camera. This may be fine for news and documentaries, but it impedes the use of these tiny mics for dramatic work by making them visible on camera.

One very simple hint, but easy to forget in the heat of a field recording, regards capturing room tone. In between recording the on-air talent, always capture a minute or so of room tone – the sound of the room when no one is speaking or moving. This will become extremely useful in the editing process. Speaking of which…

Head for the DAW House

Some higher-end video-editing programs allow you to edit audio on a much more finely-detailed scale than the 30-frames-per-second video mode allows. (This mode is called Audio Units in Adobe’s Premiere Pro editing program.)

Audio units are useful for a variety of purposes: they allow you to adjust the volume of individual words, helping to normalize disparate volume levels. You can insert fades if necessary at the end of sentences, to reduce background noise spilling in. And, if the on-air talent’s line readings are similar-enough in timing, it’s possible to cut the best sound takes together under the best visual take, to create line readings that are clearer and more accurate than is normally possible in a single take. The same holds true for narration, where it’s even easier to edit multiple takes together, since you don’t have to worry about synchronizing to lip movements.

Audio units are useful for a variety of purposes: they allow you to adjust the volume of individual words, helping to normalize disparate volume levels.

This approach is somewhat akin to the process that the recording industry uses when recording a pop artist, who sings multiple takes, and the best versions are edited together – sometimes with cutting in mid-syllable when necessary.

While a video-editing program using audio units can allow for this sort of sound editing, it’s often useful to export audio to a digital audio workstation (DAW) program. Using a separate DAW program such as Adobe’s Audition, or Cakewalk’s Sonar 8 Producer Edition can allow your audio editing to go far beyond what most video-oriented editing programs will allow.

The music industry has created a variety of computer plug-ins designed primarily to enhance lead vocals on pop songs and add what the music industry calls ear candy to sweeten recordings. Several of these plug-ins can be extremely helpful for processing video dialogue – and a little ear candy never hurt a video, either.

You can also tweak dialogue with sophisticated pitch-changing software, such as Roland’s V-Vocal plug-in, which comes bundled with Cakewalk’s Sonar Producer Edition and the pioneering Antares Auto-Tune. They can create Mickey Mouse and Darth Vader effects by pitching an entire vocal up or down. You can also use them to tweak the pitch at the end of a sentence, to make a sentence concluded on an upturned phrase end with a more definitive ending. In other words, you can make an “uptalker” sound a bit less like a Valley Girl. Judicious use of pitch and formant correction (formants are essentially the tone of the vocal) can also help to blend the editing of multiple dialogue readings into a cohesive whole.

The Audio Damage firm, which makes a variety of unusual and offbeat computer music plug-ins, sells a very affordable ($49) plug-in called Discord that recreates Eventide’s original breakthrough H910 harmonizer, which debuted in the mid-1970s. While lots of digital delays provide echo…echo…echo…, Discord pitch changes that echo so that it descends or rises in pitch as it fades away. If you’ve heard David Bowie’s hit 1975 single Fame, you’ve heard how the original Eventide Harmonizer can impact vocal pitches, as the lead vocal changes in pitch, repeating the song’s title from a high Mickey Mouse voice to a pitch a couple of octaves lower. Combine this same effect with a Discord’s digital delay to add a very sophisticated audio touch to a transition between scenes.

Izotope’s RX program, which works as both a standalone program and a plug-in, can often provide surprisingly transparent-sounding noise reduction, making it great for muting computer fans and other background noise from a recording, while adding a minimum of processed-sounding “color” to the recording. It’s also often very effective for reducing digital distortion, which often occurs when the recording of the first part of a sentence is too hot for the camcorder’s recording level. For extreme situations, an applet such as Bias, Inc.’s SoundSoap Pro, while coloring the audio more than Izotope’s RX, can do wonders to salvage an audio track otherwise ruined by hum or wind.

Finally, Ozone, Izotope’s mastering plug-in, has a variety of applications for processing vocals. Its compression function can do a lot to level a vocal while automatically staying just under the distortion level. Its exciter function can psychoacoustically appear to boost the level of a lead vocal instrument, making it perfect for raising a narrator above an otherwise loud music bed. Its mastering setting can add the final touch when placed on the bus of a combined master recording, ensuring that the levels are compressed and even, without distortion.

(A DAW and all of these plug-ins are absolutely terrific for producing audio-only podcasts as well, needless to say.)

No Mic Jacks? No Problem!

If you have a favorite camcorder, but it’s missing a jack for an external microphone, here are some workarounds. The most obvious is to record MOS, as they said in the early days of talkies, pidgin German for Mit Out Sound, a.k.a. without sound, and then add music, sound effects and narration in the editing bay.

Alternately, if your video-editing program draws the waveform of the audio onscreen, it’s not too difficult to sync up the sound from a separate digital recorder. Prior to owning a prosumer-quality Sony HVR-A1U HD camcorder with XLR inputs, I used a Zoom H4 digital Handy Recorder to record dialogue, while recording video with a consumer-grade DV cam. I could plug a professional Shure SM-58 handheld mic into one of its two XLR inputs, or simply hold the recorder in my hand and talk into its built-in stereo condenser mics, since the recorder wasn’t much larger than a microphone itself and could be battery-powered.

How do you sync up the sound? For decades in Hollywood, they recorded audio with a tape recorder, and then synced to the picture in the editing room. To simplify the mating of sound and picture, Hollywood relies on clapperboards to simultaneously generate a loud audio clack! and the filmed image of its two boards coming together as a visual cue to syncing up the sound and picture.

That basic method (or a more primitive version, a handclap on-camera) has worked since the earliest days of the first talkies in the late 1920s, and it is one option to consider if you’re recording audio into a digital recorder. Another is to use the audio from the camcorder’s built-in low-res mic itself as a guide. Most editing programs generate a visual image of the waveforms of the audio. By sliding the waveform image of the separately-recorded audio track until you align it with the waveform image recorded by the camera’s mic, it’s possible to sync the two remarkably tightly, particularly if you can switch your editing program into the aforementioned audio time units.

That’s not my first approach to recording sound, but sometimes necessity truly is the mother of invention. On a Hollywood movie or TV series, the sound department often consists of several people, from boom operators to dialogue editors to sound effects wranglers to mixers. Working carefully, and with a solid knowledge of what hardware and software are capable of, it’s possible to combine these operations into a small, manageable team – or even one person if necessary. And with surprisingly sophisticated results.