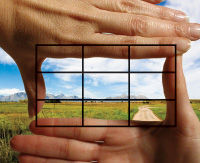 Some photographers and videographers have a Natural Eye that composes shots and scenes all around them, even when they aren't holding a camera. You know you have The Eye when you start composing scenes everywhere you go. Eventually you'll compose using the Rule of Thirds…

You know you have The Eye when you start composing scenes everywhere you go. Eventually you'll compose using the off-center composition the same way people that have immersed themselves in learning a new language start to dream in that language while they sleep.

You may think that you can practice videography only when you have a camera in your hands, but that's not true. Real filmmakers or video producers are working all the time – whatever they're doing. The craft becomes part of their daily lives – an innate part – because making film or video isn't about capturing an image – it's about seeing things. The greatest skill a director of photography possesses is an understanding of how to frame the world so that it looks its best on a television screen.

Just as athletes train in their sport, good filmmakers practice, learn and constantly evolve. This means not just developing an understanding of the technical aspects – such as the effect of different types of lights, color temperatures, the looks of different focal lengths and f-stop combinations – but also an artistic understanding of how to position objects in the frame in a way that is most visually compelling. Luckily, much of this skill depends on rules and conventions that you can study, learn and reason.

If you've been reading this column for any length of time, you've heard us talk about the off-center composition. This is probably the most important rule of composition – so important that you'll want to start seeing your world by it.

Good visual artists – camera people, designers, photographers and painters – have minds that are constantly thinking of composition; it goes on in the background of their thoughts. Walking into a room with or without a camera, they will notice back lighting, they'll notice cluttered backgrounds and where best to stand to avoid them and they'll also know where to place the camera to best acheive off-center composition according to the Rule of Thirds. They'll know this without thinking about it, in the same way that you avoid stepping on an overturned trash can on the sidewalk.

Be aware of uses of the Rule of Thirds around you. Every time you watch TV or a movie or look at a photograph in a magazine, imagine a grid across it and see where the lines intersect. What's at that intersection? How is the director of photography using off-center composition to draw our interest to one particular portion of the frame?

Now that you know what to look for, incorporate it into your daily life. When you're walking down the street or shaving or watching a baseball game, visualize the viewfinder in front of you, and ask yourself where you'd put the camera if you were shooting this. What is the key element of interest in the scene? Where should you place it in the frame? What other elements in the scene do you also want in the composition? Where does the camera need to be to accomplish that? Can you use interesting foreground or background elements? What zoom do you need, and how will a zoom change the composition? Move the camera up or down? Don't be trapped on a single axis. Shoot on an angle?

Keep the grid in your mind while you envision your shot. Where do those lines intersect, and what do you want at that intersection? Keep in mind also that the area of visual interest is something that you get to choose; it may not actually be the most important thing. You may choose to fill the screen with a shot of someone reacting to an event. You might focus on a ball up close on one side of the screen while children play out of focus in the background. Drawing and directing the audience's attention is your job – you're their tour guide, so be creative and entertaining. Compose and recompose in your head until it becomes routine. Also, dissect everything that comes to you – every television commercial, every flier, every billboard, every movie. Ask yourself, how they are using off-center composition? What objects are they choosing to put in these key areas of the frame? How do they frame people as opposed to buildings? Where are the horizons in landscapes? How does it make the shot more useful or beautiful? As with all rules, you can break this one, sometimes with great effect, but you need to be aware of it first. If the director has not followed the Rule of Thirds, ask yourself why. How does it make the shot potentially more useful or beautiful?

Learning to see like a filmmaker is one of the key steps to becoming a great one.