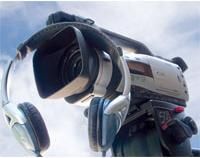 “I don’t know why I spend all this time recording such beautiful sound,” I once heard a television sound engineer lament. “They’re just going to mix it down to one channel, and people are going to listen to it on a speaker the size of a walnut.”

That was way back in the 1980s, when having the best sound system for video in the whole neighborhood meant you had two channels of audio on your VHS player. The world has changed a lot since then. Home theaters today have better audio than most movie houses had in the 80s. People today routinely watch video with sound coming from six or more speakers. New technologies have not only increased the sound quality, but drastically reduced both the size of the speakers and the amount of power needed to drive them.

What all this means is that videographers now must pay much more attention to recording audio with their productions, because people aren’t necessarily watching in low-fidelity anymore. But what to do if you don’t have six microphones, countless boom operators, Foley artists or the time to mix things into surround-sound channels? There are a few things you can do to drastically improve your sound quality, even if you’re recording in mono.

Today you wouldn’t dream of not looking through the viewfinder while recording – doing so makes sure that you have your image properly framed and your horizon correct and that distracting things aren’t entering into the frame. Looking in the viewfinder allows you to see how the scene unfolding before your eyes will appear to the people “back home” when they view your video. Plugging a set of headphones into your camcorder and listening to the audio will let you hear what the people back home will hear when viewing your video. Did the sound of that passing airplane drown out the dialog? Is there an annoying buzz coming from somewhere? Listen and find out. Nearly all modern camcorders have stereo mini-plug out – to make sure that you block out that ambient noise, you should use a big set of over-ear earphones, but, in a pinch, the set that goes to your iPod is better than nothing.

Get That Mic Off the Camera!

You can have wide shots followed by tight shots of the same subject, and it doesn’t ruin the viewing. In fact, variety in video makes a production more interesting. However, when you are using only the on-camera microphone, the sound gets louder or quieter as you get closer or further from people or objects. Cutting back and forth from loud to quiet audio will drive your viewers to madness. The subject-to-microphone distance should remain constant. The easiest and most effective way to do this is with an off-camera microphone. You can videotape your talent from sixty feet back, but keep the microphone within a few feet of the subjects, not half a block away.

If you don’t have an off-camera microphone, you should consider buying one. There are three types that you can consider:

Any one of these and a good supply of cable or a wireless connection will go a long way toward improving the quality of your audio. Which microphone you buy will depend on the types of videography you do. Eventually, you’ll probably have at least one of all three types in your kit.

What to Do on the Set

When you are recording sound on location, someone on your crew should be responsible for audio. It might be the camera person or it might be a separate audio person who also controls the boom microphone. This person should be listening to the audio on headphones and should also be responsible for making sure that the set is quiet before the tape rolls. Audio technicians or directors frequently call out “Quiet on the set! Tape’s rolling!” before the director calls “Action,” to let the crew know that the scene has started and they need to immediately cease making noise. The audio technician will also be sure to record 30 seconds or so of “room tone,” which is the ambient sound of the room. People and equipment affect the acoustics of a room as sound bounces off them or is absorbed, so it’s important that everybody who is in the room while you record the dialog is also in the room (but completely silent) when you record the room tone. You can use the room tone to overdub or “erase” extemporaneous noises recorded during the take. The prop masters who worked on the 1960s Star Trek television series wanted the actors’ tools (phasers and communicators) to mount magically onto their clothes without visible belts – so they used Velcro. Every time Captain Kirk pulled out his communicator to call back to the Enterprise, there was a zip! noise as the Velcro detached. Overdubbing with room tone made the sound vanish. You may want to overdub the sound of a passing truck or a falling lamp off-set.

Typically, you want to avoid doing things in post production, but there are some things that you have to do in post, and it would be foolish to do otherwise: adding music is a perfect example. It would be a bad idea to have music playing during a take, because of the matching difficulties it would provide. When production crews film scenes that take place where music is supposed to be playing, they will record only the actors’ dialog, while extras dance silently to non-existent music. The editor adds the music later in post.

Other things you’d want to add in post production might be sound effects. It’s often best to add the squeal of brakes, honking of car horns and thunderclaps after the fact. The person who does this is a Foley artist. These artists create the sounds of galloping horses, shoes walking across floors and even the incidental sounds of utensils clinking on plates. Foley artists add almost all sound effects you hear in movies, because of the difficulty in recording them properly during the time of production.

All but the simplest non-linear video editors allow for multiple audio tracks, which let you add things like crickets chirping, dogs barking far off or nearby noises, without interrupting your dialog.

Very often audio is an afterthought during a video production. As home theaters become more sophisticated, the limitations of the original recordings become more obvious. By paying attention to sound when you record it, you’ll be sure that your sound will be clear and consistent, even if it plays through unsophisticated stereo or even mono speakers. This makes a big difference in your final product.