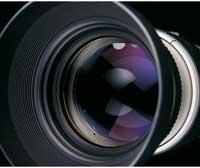 There’s more to getting your camera in focus than meets the eye. But what is focus?

Focus is the act of bending light through a lens onto a plane, which clearly represents the objects on the other side of that lens. In the natural world, muscles in your eyeball perform this by causing the thickness of your lens to change, in order to project an image on your retina. In your camcorder, it’s done by a series of glass or plastic lenses, whose distance from one another is changed by a rather complex collection of threaded tubes that move – some forward and others backward – to keep images sharp throughout the range of your zoom.

The distance that these lenses need to be from one another in order to produce a sharp image on your camera’s CCD is well known, and in the film industry there is no looking “through the lens” to adjust focus; rather, focus is set with the aid of a tape measure and a set of tables. There are people, called “focus pullers,” whose entire job – and they make careers from it – is to sit at the front of the camera and turn a knob from one preset point to another, to keep the objects in the lens in focus. They do this by looking at the distance of the subject to the lens and by using scales on the camera. Camcorders are much more convenient.

Today, camcorders rarely have focusing tables on the lenses. Most camcorders come with a viewfinder that allows the operator to see whether the object in front of the camera is in focus or not, and most camcorders today have automatic focus built in.

There are two types of auto focus: “active” and “passive.” Both have their problems. Active auto focus sends out a beam of infrared light and measures the time it takes to bounce back from the subject. Passive auto focus measures the contrast between adjoining pixels in vertical lines, in much the same way that the old split-prism viewfinders worked in old 35mm SLR cameras. By racking the focus back and forth until the camera sees the vertical line properly, the camera finds the proper focus. If the subject moves, the camera will continue to look for a vertical line. For this reason, it’s easier to focus on some things than others.

Many camcorders today have multiple “focus points” or areas on the screen where it’s possible for the camera to find and focus on a vertical line. Think of these as “focus-sensitive areas” on the screen. The more you have, the greater ability your camera has to get good focus. But the camera can’t always guess what you, the movie producer, want to have in focus. Is it the person in the foreground? Or the flower arrangement in the background? No matter how many focus points your camera has (check your camera’s manual for how to set the different focusing options you may have), some oversight may be necessary from time to time.

Easy to focus on:

Difficult to focus on:

Active auto focus can be fooled by:

For general video work of typical subjects in decent light, auto focus might be all some people ever need, but there are instances where manual focus is called for. Typically, these are instances where you want the focus to stay the same, no matter what’s going on in front of the camera. One such instance is objects moving through the frame (imagine a commercial with a closeup of a hand holding a cell phone with an out-of-focus soccer game in the background). Composition may also fool the camera (judicious use of the Rule of Thirds may sometimes be at odds with your less-creative camera).

Back focus
Back focus is typically an issue when you are videotaping two people standing together but not centered in the frame. The camera looks for an object in the very center to focus on, misses the two people to the sides and focuses on the wall behind them.

Not enough light
Today’s camcorders are very sensitive to low light, but not having enough light will still send your camera hunting.

Rocking
When your camera is unsure of the focus or faced with an object that is constantly in slight motion, like a child on a swing, the focus may rock back and forth. Typically, this appears as slight back-and-forth motion exhibited by the lens’ front element. The camera is ignorant of the depth of field and will try to focus, even when the depth of field is several feet in either direction. For this reason, sometimes it may be desirable to switch to manual focus or switch the auto focus off after the camera has focused itself on a well-illuminated subject.

Out of Focus for Effect?

Rules are made to be broken. Typically, you want the sharpest focus you can get. But there are times when you may NOT want sharp focus on a subject. One common technique is the use of “soft” focus to hide skin blemishes or wrinkles. You can use a “soft focus” adapter or the old Hollywood technique of shooting with a nylon stocking over the lens. The 1960’s TV show Star Trek had a well-known habit of using soft focus to identify women as glamorous.

Another technique might be a POV shot demonstrating that a character is groggy or has been hit in the head or drugged. John Brahm uses out-of-focus POV shots to demonstrate the plight of hyper-nearsighted librarian Burgess Meredith after he loses his glasses in the classic Twilight Zone episode, Time Enough At Last.

One focus horror story comes from the 1962 film The Manchurian Candidate. In a critical scene, the director mismeasured the distance between the camera and Frank Sinatra’s eyes. The singer delivered the scene, but the processed film revealed that the focus area was actually six inches past the star’s eyes and the scene could not be re-shot. Luck won out, though, and the element in focus was the rank on Sinatra’s military uniform, which caused audiences to change their own focus. Instead of focusing on his eyes, they focused on his collar, thinking “This is a military man; what does that mean about the words he is saying?” Later, film critics congratulated director John Frankenheimer on his clever use of focus, unaware that it was entirely unintentional.

Good, sharp focus is critical to the overall success of your production. By understanding how focus works and when to use things like manual or auto focus and avoiding common focusing mistakes, you can improve the overall value of your final product.