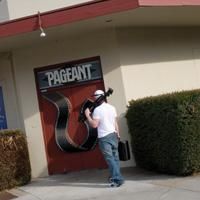 The stage exists for one reason: to make it easier for the audience to see a performance.

It stands to reason then that anything worth putting on a stage is worth recording for posterity. However, there is a huge disconnect between being there and watching it on television. Stage plays are a spectator sport – people pay huge amounts of money to be in the room as the events unfold, live before them. Once it’s recorded on video and played back in your living room, it’s the difference between a puppy and a picture of a puppy. There are two markets for recorded stage presentations: people personally involved with the show – the performers, their friends and family – and the “general public,” meaning people who aren’t related or don’t have a vested interest in the people on stage. Who your audience is will probably have a lot to do with how you go about shooting and packaging the stage production. Olivia’s first cello solo is still Olivia’s first cello solo, no matter how bad the recording, and it’s still going to be precious to you. However, you’re probably not going to buy a videotape of “Les Miz” recorded from the 15th row with a handheld VHS-C camera.

The absolute worst way to record a stage presentation is with a handheld camera from the audience. Your video is shaky, you probably zoom in and out too much, and you can’t move around to follow the action. For this reason, it’s usually not a good idea to videotape a production while there’s an audience there. If you have access, you can make a better recording – videotape the last dress-rehearsal. This will give you the ability to set up a camera and tripod wherever you want, and put microphones in places that you ordinarily couldn’t. If possible, shoot the last two dress rehearsals. This will give you the option of having one static “master” shot and shooting the second with a tighter zoom. This will let you cut between the two.

Know as much as you can about the venue before you get there – how much light will there be? Will the light be gelled? How will you set your white balance? Is there power? Where can you set up your camera? Is the audio miked? Do you need to tape down your cables?

The amount of preparation you do depends on how important the shoot is to you. Obviously, if it’s a wedding that you’re being paid thousands of dollars for, it behooves you to get there way ahead of time and scope out the location, so that you’re prepared for the big event. If it’s a favor for your next door neighbor who still leaves his trash on your side of the sidewalk, you may be content just showing up the day of with your camera bag and asking where you can sit.

One Camera, One Position

One camera in one place is less desirable than multiple cameras, but sometimes it’s all you have and, if you’re recording the event for the players or their friends and family, they’ll most likely be happy with it. Pick a place far enough back that you don’t need to zoom out all the way (wide angles cause distortion), but close enough that your microphone cables will work. Have a wireless mic? Now might be the time to use it.

Long static shots are dull and tax your viewer. If you have the option, the best way to shoot a stage show is with multiple cameras and a video switcher. It’s always far less time consuming to edit “on the fly” by switching cameras at the event than taking multiple tapes into the editing room and choosing between scenes and synching sound and video.

Ideally, in a multi-camera shoot you’d have three cameras, one with a long shot covering the whole stage and two moving cameras with operators. Video mixers, like the $600 Model SFX-9A from Sima (www.simaproducts.com) allow you to switch between four cameras and even use effects like wipes and fades.

If that’s not in the budget, two cameras are certainly better than one – so even a wide static shot and a single moving close-up camera give the director many more options for keeping the show interesting.

If you’ll be recording the show twice with one camera, do the master shot first, so you know beforehand what you’ll want to get in close-up and where it’s going to be taking place on the stage.

Whether you’re shooting with one camera or more, be sure to get some B-Roll – shots of the building, pans of the audience, close-ups on audience members’ faces that you can use to cover inefficient cuts and spice up the whole presentation.

As you already know, the on-camera microphone is the worst way to record sound for pretty much anything. This is doubly so when you’re standing 30 feet away from the stage. Ideally, you want a couple of microphones hanging above the players or at the lip of the stage, catching all of the action without getting the coughing, cell-phone conversations, and candy-bar unwrapping coming from the audience. In a pinch, you can use a single off-camera microphone near or on the stage, if the sound won’t be affected by heavy dance moves like clogging. (Ask first before placing any recording equipment anywhere in the hall; you certainly wouldn’t want a dancer or actor tripping over your un-dressed cables.)

Be prepared, and know the scene. Two cameras are always better than one. Don’t forget to try get the best audio that you can. Call ahead. But above all, have a good time while you are doing it. You are the custodian of memories – enjoy that responsibility.