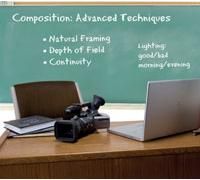 Beauty might be in the eye of the beholder, but a great photo is due to well-executed and thought-out composition. Take your seats, it’s time for the Advanced Class in Composing.

In last month’s "Basic Training," we looked at some of the basic vocabulary of composition, and how to give boring ordinary shots a little more pizzazz. In this second of two part articles on composition, we’re going to take a look at some more advanced techniques, ways to start putting the things you learned together and also, ways of studying composition on your own.

Beyond the basics of composition are several very important tools that should be in the tool kit of every serious video producer.

We like it when things are framed. The line of the mat and the frame around your favorite images hanging on your wall are there for a reason.

When composing, look for natural frames, such as building arches, windows, doorways, or breaks in tree branches to create natural frames to shoot through.

Noon on a cloudless day is a terrible time to capture images. Harsh shadows make people’s eye sockets into black holes; contrast is so strong that cameras have difficulty keeping the highlights and details.

If you can’t choose when you shoot (morning and evening are best, as well as overcast days — in these cases you have the sky acting like a giant soft box for you — choose where you shoot. Move your subjects under an awning (be careful that you don’t back light your subject) or into shade, or maybe even indoors.

Out of Focus Areas

It might seem counter-intuitive to want things to be out of focus, but often you do. Using "selective depth of field," a videographer can focus the audience’s attention on one particular part of the frame, leaving some elements out of focus. Due to the nature of camera lenses, this works best using your telephoto lenses or zoomed all the way in on your built-in camcorder zoom lens. This can be used to isolate a person in a crowded street, for example. If it’s too bright out to use a wide aperture, you can add neutral density (ND) filters to the front of your camera. These act like sunglasses and reduce the amount of light getting in to the chip, allowing you to shoot with a wider f-stop.

Now that you have some techniques under your belt, let’s take a look at how to put them all together. Many videographers and directors of photography will look at a scene and quickly position the camera, seemingly without thinking about it. If you asked them about that position, it might take them a minute to stammer out a response.

Because the vocabulary is ingrained, good cinematographers and videographers think in composed shots. They subconsciously frame things properly, seek out good light and know upon walking into a room where the camera must be placed to avoid distracting background items and still get two actors’ faces in the frame. The more techniques you learn, and the more you learn to identify them, the more they will become part of your creative subconscious process.

When to Break the Rules

To quote Ansel Adams, "There are no rules for good photographs, there are only good photographs" — meaning, of course, that adherence to the rules does not guarantee results. The best example of breaking all the rules recently is the 1999 smash hit The Blair Witch Project, which was ostensibly directed by Daniel Myrick and Eduardo Sanchez, who weren’t even on the set most of the time, let alone peering through the camera setting up shots. Possibly the film with the worst compositional techniques ever to grace the big screen, the Blair Witch’s first person hand-held POV shots, lit by flashlights and much shaking, succeeded because it made the audience believe the video footage was "real" instead of Hollywood fabrication.

One frequent mistake that even seasoned videographers and cinematographers make is forgetting that a particular shot that you are acquiring must match the ones before and after it in the finished production. This means that you must pay attention to background; for example, a wall that is brick in a wide shot can’t mysteriously become stucco in a closeup. Keeping track of continuity is what makes a scene flow from shot to shot appear seamless. For example, if your scene of a criminal running to his car for a quick getaway has him reaching for the car door with his right hand in a wide shot, then the closeup cutaway shot is of his left hand grabbing the door handle, you’ve broken continuity and jarred the attention of the viewer from the story.

With a good grasp of the basic rules of composition, the next step is to learn to incorporate them wherever possible and to make good composition second nature. Study several examples of good cinematography and learn to critically analyze the content that you consume. Make sure your shots don’t just start out well-composed but maintain their composition throughout their duration. Learn more advanced techniques, such as use of depth of field, and add them to your repertoire.

Sidebar: Shoot Around it!

When asked how he is going to build a hospital set with no budget, a clever director will realize that a movie hospital can be made with a stethoscope, lab coat, and a clipboard, if they shoot everything in closeup.
Directors compose around daunting setups all the time — a crowd at a basketball game may only consist of the twenty people you can see on the screen, jam packed into a small section of bleachers. A desolate Kansas highway might actually be a twenty foot stretch of suburban driveway with forty corn stalks from a craft store standing in the background; the giant ape holding Fay Wray might just be a giant hand, and that ship being rolled over by a tidal wave might only be two feet long. Oftentimes composition is the task of making something out of nothing.

Every year Hollywood gives out an Oscar for the film with the best cinematography – in theory, this is a movie which is at the very apex of its craft, in practice it is often a movie that simply did well at the box office, however, almost no movie with bad composition does well at the box office. Recent favorites include 2005’s Memoirs of a Geisha, 2003’s Moulin Rouge for its spectacular use of color, and 2001’s beautifully filmed war movie Black Hawk Down. Take a critical look at some of the nominees. Pause the movie frequently and asked yourself: