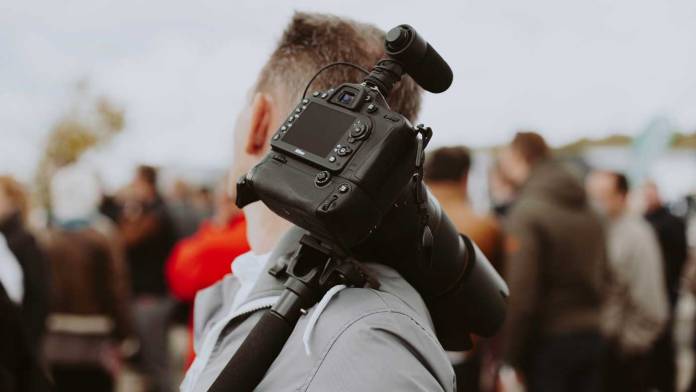 Ever try to set up a tripod in a crowd of people? Or what about on the side of a mountain? If you have, you know how frustrating it can be. Trying to get the tripod level or finding a place to put it can stir the urge to throw it off the cliff instead. But what other options do you have?

Most of us have seen hand held camera work that makes us sick to our stomachs. The camera bounces, jiggles, can barely find focus, and leaves you running for anti-nausea medication. If you don’t know what we’re talking about, just go rent the Blair Witch Project. The movie’s handheld technique earned it style points, but left many people green in the face. Handheld video doesn’t have to look like that, if you know what you are getting yourself into before you shoot.

Body positioning, control, and awareness are the keys to handheld video. If you can manage that, the rest is easy. The problem is most of us are too impatient and too used to our own perspectives to take the time to really see the images we capture when shooting handheld. While patience is something you have to discover within yourself, tried and true methods can improve all your video endeavors.

Camcorders are lighter and smaller than ever before, making them easier to carry. A downside to their small size is that they are more difficult to hold steady. A big, heavy camcorder is more difficult to shake around because it takes more energy to move its larger mass. A small camcorder, on the other hand, will shake and wiggle with every little movement of your hands, arms and body.

To minimize camera shake, stand with you feet shoulder-width apart and keep your elbows in. This will ease the stress on your arms and your back. Don’t lock your knees or tuck your elbows too tightly. You want to be able to use your body as a shock absorber when you move. Tightly tucked elbows and locked knees will have you and your video shaking in no time. Think of your knees and elbows like the shocks on your bicycle or car.

Use both hands to support the camera. This provides added control and balances out the weight of the camera. You can cup the camcorder on both sides or on one side with the other hand acting as a plate beneath the camera. Hold the camera slightly away from your body for even more control and added support for you and the camera.

Your body awareness and relaxation level can be the difference between a fluid-head tripod and a sticky, jerky tripod.

In this basic body position, you should be relaxed but aware of your body and in-turn the camera. Your body awareness and relaxation level can be the difference between a fluid-head tripod and a sticky, jerky tripod.

Not in the mood for standing? Need to get a different angle? There are several other body positions that can really improve your handheld abilities. You can lean, sit and even lie down for added perspective and shot variety. After all, being able to go where the shot takes you is one of the reasons we abandoned the tripod in the first place.

Have you ever been in a crowd of people and everyone keeps bumping into you? Next time, find a building or even a lamp pole to lean on. Besides getting you out of the way, leaning on something provides you with added support and can calm tense or jittery muscles.

Another way to calm shaky muscles is to kneel. Keep your hand/arm positions the same, but change the way you balance and distribute your weight. Kneeling also allows you some foreword/backward movements — as you shift from your knees to sitting back onto your feet and vice versa. While kneeling will give your legs and feet a break, be prepared to give your arms a workout.

If you need to get even lower or want to ease some of the arm stress, you can try sitting. Sitting lowers your center of gravity and helps you keep the camera more still. When you sit, you can rest the camera on your legs or pulled up knees for easy pivoting and less arm strain.

If you really want to get creative, or if sitting doesn’t quite get you low enough, try lying down and shooting prone. If you lie on your back, you can shoot the sky; if you lie on your stomach, you can use your elbows as a bipod and with the same two-handed holding of the camera, you can add in some pans. If you’re on that same cliff, lying down can also get you a nice over-the-edge shot without as much risk of falling off.

If you want more support than your own body can provide, it is likely your environment can lend a hand or two. Chairs, tables, trees, benches and even trash cans will help you get the steady image you’re after. Videographers will often balance a camera on the back of a chair to get a level, still shot without the hassle of a tripod. Tree branches and fences work much the same way. If you look around, you’re likely to see all sorts of environmental helpers you can lean on or use to balance and steady the camcorder.

If you’re up for it, haul along a small beanbag or a camera bag as well. These are rather inexpensive accessories and are often lightweight, making them easy to transport. They are helpful because they are cushy and pliable and can fit into tight, rough or uneven spaces,. The camera will sit upon the beanbag and you can manipulate the angle from there.

Use image stabilization. Most camcorders are equipped with the image stabilization feature. Also, you should avoid telephoto lens settings, because they magnify all movements, including your own. Try to use the wide-angle lens setting as much as possible when shooting handheld. If you want a close up, move yourself and the camera closer rather than zooming in.

So far, we’ve been discussing static handheld shots, for the most part. But what if you want to execute a smooth camera move while shooting handheld? Ever see a marching band? They step lightly and intently, stepping from heel to toe. That’s how you have to walk when you shoot handheld. You can also employ the use of your elbows and knees to be the shock absorbers.

Other motion shots, such as pans, tilts, booms, and cranes, can be achieved handheld. Many of these motion shots can be accomplished simply by using your environment and staying in control of your body and aware of your camera.

The best way to shoot a handheld pan is to twist your entire torso, not just your hands or arms. Start by aiming your feet and body in the direction you want to end your shot, then twist your torso into the direction you want to begin your shot. Slowly unwind your torso as you shoot your pan. By finishing in the position you are facing, you won’t make as much shake as if you start at the point your body faces, then try to finish the pan in an uncomfortable and unbalanced position. Passable imitations of crane and boom shots can be achieved by extending your arms and slowly sweeping the scene. You can also go from a squat to a standing position to get even more crane and boom effects. Again, start in the least balanced position, and end in the most solidly footed pose.

While most situations can accommodate the use of a tripod, and most videographers use them as if the camera were a permanent attachment, handheld videography is an essential skill to have. It is also a fairly easy one to pick up, if you apply yourself.

Know the proper body positions and be aware of yourself and the camera. This will give you the added control and support you need to get those steady shots. The last thing you need to do, and perhaps the most important, is to practice. The more you practice, the better you will become.