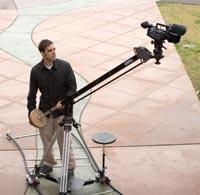 When you want a moving shot, you have all kinds of options, including a few that you might not have thought of before.

After white balance, exposure and focus, a steady image is the most important component of visual quality. Camera moves are part of many shoots, but you can't move without risking picture shake, Let's survey several basic ways to achieve professional moving shots. We'll start with that old standby, the tripod, and then go on to more exotic transportation devices.

Simple, cheap and practically foolproof, tripods are by far the easiest approach to steady images. Creating smooth moves with a tripod is truly simple. Start with a level tripod, stand halfway between left and right panning extremes, and adjust the external view screen with your left hand as you tilt in order to keep the image in clear sight. And don't "correct" your ending composition if it's slightly off. Either live with your mistake or retake the shot. End of story. Tip on shots that don't allow clear view of both beginning and ending frame: If you have no choice, opt to view the endof the shot. Precompose the shot at the beginning, then move yourself so you know you'll be able to see the viewfinder clearly at the end of the shot .

Tripods are so versatile that all professionals employ them and many programs use them exclusively. Tripods offer great control over composition. You can pre-frame the start and finish of each move and, with rehearsal, hit both compositions perfectly. The sure, confident look has "professional" written all over it.

The downside of tripods, of course, is that you can't change camera position during a shot. Wherever you are, there you stay. To overcome this limitation, do all your moving between shots. That is, plan your setups to ensure a wide variety of angles overall. The feeling of motion will be almost as strong as if you were handholding all over the place. Just because you are using a tripod doesn't mean your shots have to be boring.

Still, for true flexibility, there's nothing like the freedom of hand-holding. This type of movement has been rescued from rank amateurism by two inventions: lens stabilization and the external view screen.

The lack of image stabilization may be the most powerful single argument for trading in an old camcorder. Modern stabilization systems can remove camera shake at wide-angle settings and can generally do a good job of dampening shake considerably even in long telephoto shots. So well, in fact, that some binoculars now have adopted stabilization functions as well.

External LCD viewing screens separate you from your camcorder. This eliminates vibrations from your forehead and allows you to use your bent arms (and legs) as shock absorbers. You can also move the camcorder far above and below eye level for novel and dramatic points of view. With a Hoodman sunshade in place, I almost never have to use my internal viewfinder at all.

Hand-holding techniques are also simple: use wide angle lens settings, move with knees and elbows flexed and try to progress from one solid composition to another. It's not always possible, but you'll get smoother results if you can also move sideways, crabbing along beside the subject you're framing. You may never even need a stabilizer. ("Steadicam" is a brand name, by the way.)

On the other hand, flying camera stabilizers produce some beautiful shots. Properly used, they let you follow subjects around corners, through doors, up stairs and over rough terrain and your images seem to have been shot on rails.

Professional stabilizers for light camcorders are available for just a few hundred dollars and they work beautifully. I prefer the designs that place the camcorder above a gimbaled counter weight. I also prefer the type you wear, because even a two-pound camcorder gets mighty heavy when held out on top of a mechanical rig. For a poor-man's hardware store stabilizer, try performing a search on the Internet for amateur homemade stabilizer projects.

Stabilizers have two major drawbacks. First, they can be time-consuming to adjust and calibrate for perfect balance and some types require frequent re-adjusting. Second, they add about three feet to the "footprint" of the cameraperson, making them tough to manipulate in confined areas. This is no problem with staged shots because the operator's moves are planned and rehearsed so crewmembers can get out of the way. At unplanned shoots, like weddings or documentaries, they can be bulky and confining. This is generally no problem when shooting sports, so camera stabilizers are particularly effective for sideline work. In collaboration with lens stabilization, they allow for some long telephoto shots on the fly.

True camera dollies produce the smoothest moves of all. Dollies for smooth floors operate on wheels and some models can crab sideways. Tracked dollies are smoother on rough floors and outdoors.

The real drawback of dollies is setting them up, rehearsing camera moves and then taking them down again. They aren't much use for spot-news, but on the other hand, there's absolutely nothing like a dolly shot for a suave, professional look.

For vertical flexibility, you can fit a dolly with a jib arm. Useful models include remote controls for the camcorder on the end of the arm and separate monitors for the operator. There are even jib arms that work as handhelds.

To improvise a dolly, you can use almost anything with wheels, although perfectly smooth tracking can be frustratingly elusive. In schools and industries, large-wheeled carts can hold a seated cameraperson and be pushed by a crewmember. Shopping carts are ill-advised, not only because they're the property of markets, but because they have small, often irregular wheels and baskets. Wheelchairs are much better, with their big wheels and safe operator seats.

For dramatic shots, take advantage of moving platforms. Escalators and airport-style beltways are great for dynamic shots. For variety, experiment with opposing movement: tape a subject on an up escalator from the down escalator beside it. Stand at right angles to a beltway and tape people approaching on the floor, pan with them on the way by and then frame their backs as they dwindle in the distance. For a variation on the classic Hitchcock shot, zoom slowly in to keep them the same size in the frame as they move away from you.

Cars, ATVs, even golf carts: anything self-propelled can become a camera car. In autos, hold the camcorder out the moon roof or side window. For safety, (a) keep yourself inside, (b) use the camcorder wrist strap, and (c) use a clear lens filter (remember road stones?), I suppose this should go without saying but don't drive and shoot. A parallel moving shot can make the viewer dizzy, and is hard to get smooth, so shoot your subject at right angles to the vehicle motion, otherwise, aim forward or back to avoid recording meaningless blurs.

With any camera technique, you shouldn't move the camera just because you can. Perform moves when your material calls for it and, although flying camera shots look really cool, don't overdo it.

When appropriate, and when well planned and executed, camera moves can really punch up a scene. The beginning and end of a moving shot needs to be relevant.

Jim Stinson's book Video: Digital Communication and Production is out in a 2nd revised edition.

[Sidebar: Watch Out for that Tree!]
We'd recommend extreme caution when shooting from skis, snowboards, skateboards, scooters, roller blades and bikes unless you have a serious death wish. It takes a lot of concentration to safely tape and roll at the same time. If you can shoot without paying any attention to the camera at all, you may be able to pull off these shots, but it is not easy. Don't say we didn't warn you!