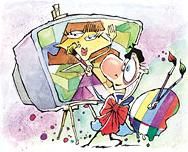 Making video is fun because it enables you to direct the attention of an audience like few other avenues of expression. A quick review of the creative arts turns up few art forms that enable the creator to manipulate the audience’s attention the way that video does. A painter, for example, has far less control over what even the most enthusiastic art patron will look at or for how long. Gazing at 3D art, in the form of sculpture, for example, may fascinate someone for a while as he or she explores the various angles, but again, the artist has little control over what the beholder will see or for how long he will be willing to look at it.

Few video producers would consider themselves artists, yet the desire to express oneself seems to be the core motive for artists and video creators alike. Musicians and songwriters may enthrall an audience with both audible and visual stimuli. If the lyrics are comprehendible, a good musical performance can be quite captivating as the members of the audience imagine, in their mind’s eye, the story the performer sings. However, with video, the artist or producer conceives and controls the entire visual and aural portions of the message. When someone watches one of your videos, they are seeing and hearing exactly what you want them to see and hear.

No doubt this has been the driving force behind the careers of the great directors from D.W. Griffith to Steven Speilberg. When George Lucas, for example, imagined in his mind’s eye, the recent Star Wars pre-quel, I am certain that he wanted to share that vision with the movie-going public. The attention to detail in that movie illustrated to what lengths George Lucas would go to mesmerize moviegoers.

In comparison with film and video, Web pages pale when it comes to controlling the attention of the viewer. Unless there is a large amount of compelling text to read, Web surfers do not typically look at a Web page for very long. Yet the World Wide Web has grown at a record-breaking speed for many years now. Therefore, there must be something else about Web pages that inspire Webmasters and attract Web surfers. My assumption is that, for Webmasters, the attraction is the capacity to reach a niche audience. In comparison with video, thousands or even millions of Web surfers can view Web pages easily and inexpensively. To view a Web page the viewer must actively seek out the content. Unlike broadcast TV, programs do not merely come on one after the other. Sending videotapes to thousands of people, on the other hand, is cost-prohibitive for most video producers. Unless, of course, they sell the videotapes.

Since people are used to getting video for free on TV, people who will buy a videotape represent a far smaller audience. Only a small number of people, mostly in the entertainment industry, have the ability to broadcast video on television. Web pages are incredibly powerful in their ability to reach a very large audience for the nominal amount of money it costs to post them to a Web site. I think the attraction for most Web surfers is the ability to quickly access vast amounts of information on a very specific topic. Webmasters who effectively address a specific topic will attract a targeted audience.

Regular readers of this column know how bullish I am about video delivered via the Web. Right now, the Web is ideal for medium quality video, at best. However, this is changing every month. Video of higher and higher quality is appearing on Web sites.

I anticipate a day, sometime soon, when anyone who has a digital camcorder, a computer with an editing program and an Internet connection will be able to broadcast television-quality video to a targeted audience via the Internet. That audience may consist of 20 of your friends and family members who live in different states, 200 residents in your town who are concerned with a common political issue or 20,000 animal lovers who may live on various continents around the globe.

When the technology that will allow this to happen is finally in place, video producers will become broadcasters, capable of creating compelling art on an electronic canvas that can be appreciated by an unlimited number of Web viewers everywhere. This will allow video producers to infuse the attention control quality intrinsic to video onto the World Wide Web. I believe that that day is closer than you might think.