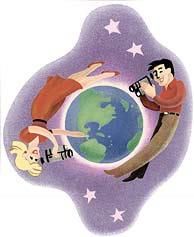 Some of you may already be working on video projects that help address problems that the world faces today. I know that at least one of you is working on a video about teen pregnancy. Still others are editing projects concerning inner city gangs. It is a wonderful feeling to know that you are contributing in a meaningful way and helping to solve some of the ills that plague our society.

Each year I see many of the Videomaker/Panasonic video contest entries. A good number of these, attempt to shed light on local or regional issues that are otherwise ignored. I remember learning about controversial beach management practices which included moving large quantities of sand from the ocean floor onto the beaches in New Jersey. This had tremendous effects on the Eco-system. I never would have known about it, had it not been for a guy who made a video about it and entered our annual contest.

When I first began to consider the power of television, I was studying a media philosopher by the name of Marshall McLuhan. He had studied communications theory and came to some interesting conclusions about social systems. For example, in a village where people communicate primarily by word of mouth, shortages and surpluses are identified swiftly so that very few people go "without" for very long. He reasoned that human beings who witness hungry people in their village tend to help them, because they can "see" their suffering. Back in the 1970s many places on the planet were experiencing famine, but it was difficult for Americans to actually see the suffering.

Marshall McCluen wrote about a coming "global village," in which all earthlings could learn about the needs and surpluses at any given time anywhere on the earth. With millions of video cameras and hundreds of satellites circling the world, we’d all be able to witness the hunger, and we might be inspired to do something about it.

This vision has come true to some degree. There are still millions of hungry people in the world. When famine strikes, TV-news programs tend to display images of the suffering people and viewers can respond to help.

In the near future I can imagine that we’ll have live pictures of starving people on the Web sites for CARE or UNICEF. Putting an individual’s face on suffering is a sure-fire way to motivate people to make an e-commerce donation to save that individual’s life. This may sound abstract. And it certainly is not an enjoyable thing to think about. However, this would be the truest depiction of a global village. As you read this, there are literally thousands of video cameras sending their images across the World Wide Web. Also known as, WebCams, these simple video cameras show ski conditions, traffic jams and baby gorillas, to name a few. It seems only appropriate that we begin to use WebCams to keep track of people in need.

If you have yet to apply your video production talents toward solving the problems of the world, I encourage you to do so. Choose a cause that is close to your heart and make a video presentation about it. If you are in need of inspiration, choose a local charitable organization, many of which need greater publicity. Video is a powerful medium and with it, you can make a difference in the world.