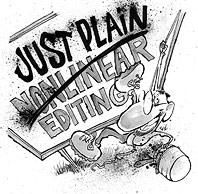 Most people that know me well have learned that I have a certain affinity for using proper terminology. This springs from my life’s purpose of facilitating effective communication. It always pleases me when people communicate effectively. I often insist upon using precise expression within our company. As many of you already know, I enjoy the creation of new words. As we find our technological lives becoming more complex, some of the existing words we frequently use are no longer adequate for us to distinguish between similar concepts. Let’s take the word editing, one we use a lot at Videomaker magazine, for example.

Editing simply refers to the act of making an edit. The definition of edit is "to correct and prepare for publication." Clearly, the word edit was originally developed for text-based media hundreds of years ago. In the early part of this century, when Thomas Edison invented the moving picture camera, the word edit seemed reasonable to use when referring to the correction and preparation of film for projection onto the big screen. In the early 1960s, television innovators applied the term editing to the correction and preparation for displaying video onto a TV screen.

The word editing as it is used today has some shortcomings, however. For some people, especially for those of us that work at Videomaker magazine, it’s easy to get confused between text editing and video editing. If I were to ask Steve Muratore, our executive editor, if the lighting project has been edited, for example, he wouldn’t know if I was asking about a text article for the magazine or a segment for one of our video series (currently distributed on VHS tape and streaming video). For any company that edits both text and video, the word editing can be confusing. However since there are only a few who currently experience this type of communication dilemma, it doesn’t make sense to make a major change here.

However, within the world of video editing, there is a need for further distinction because there are two methods of video editing. The traditional editing method is to make copies of videotape in different segments. These days, people often refer to it as linear editing. The second method involves the use of a hard disk (most commonly in a computer but also used in video appliances) and most people refer to it as nonlinear editing, or by its abbreviation, NLE. There are some people who refer to this as random access editing. The phrase desktop video editing can be somewhat confusing because it refers to either linear or nonlinear editing using a computer.

When most people read or hear the word editing and it is not modified by an adjective, out of habit, they usually consider it to mean linear or tape-based editing. This is due to the fact that tape-based editing has been around for decades, while nonlinear editing is still a relatively new concept. The trouble is, these days most people edit their videos using nonlinear equipment. Therefore, in my humble opinion, we are qualifying the word editing with the word nonlinear more often than we should.

Obviously I can not change everything but what I can change is the nomenclature that we use in Videomaker magazine. So in an effort to simplify and clarify our mission to communicate to our readers and attendees (members of the greater Videomaker community), I am hereby issuing the following edict. From this day forward whenever you read or hear the word editing in our magazine, workshops or Expos, it will always refer to hard-disk-based editing. Whenever we need to refer to editing without a hard disk and by way of videotape, we will use the phrase tape-to-tape editing.

By making this simple yet profound change in the language of video editing, we mark a point in history where the idiom has caught up with the technology and what we communicate will now more accurately reflect reality.

Make sure that you save this edition of Videomaker. In a few decades, this issue will be a collector’s edition because this is a day that the video universe changed.