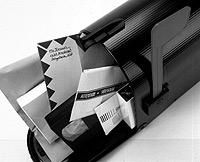 There are so many things to pay attention to, how can we possibly give the proper amount of attention to everything? Here at York Publishing, there are many ways for constituents to express themselves. We get plenty of e-mail and somewhat less snail mail. To date, text has been the chief medium for members of our community to express themselves. Our annual video contest occasionally includes videotaped suggestions regarding our focus, but this represents a tiny fraction compared to the letters and e-mail that we receive.

The idea of people using text to convey their ideas is the norm for the entire world. People write letters and e-mail to the editor of their local newspaper, elected officials, teachers, magazine editors and their friends. That last category, "their friends," is a profoundly different audience compared to all of the others. When people write to their friends, they expect to reach an audience of one. Writing to a friend is singular. The writer conveys the idea to the reader. The other examples are far more likely to consist of a much larger audience.

We often take this for granted. American citizens are able to express their ideas to large audiences. In Cuba, for example, the citizens don’t have the same expectation. The freedom of expression and freedom of the press that we enjoy in the USA is not a worldwide standard today, nor has it ever been.

The idea that freedom of expression leads to greater collaboration for seeking the truth is not new. In the 1600s, John Milton wrote about "the liberty to know, to utter and to argue freely according to conscience." In his monumental Areopagitica, Milton argued that truth and falsehood should grapple in a free and open encounter. In the decades following Milton’s writing, the concept of freedom of expression began to rise, eventually becoming the standard in most societies.

My writing thus far, has referred to text as the medium of expression. Anyone that has been reading this magazine for more than a few months knows how passionate I am about television becoming a medium where various opinions can be expressed in a free and open encounter.

It is my opinion that there are far too few people producing the programs that we see on our TV sets.

The opinions of these few elite producers seem to have greater merit, due to the simple fact that TV is the medium that they use to convey their ideas. TV is the most powerful medium of communication that humankind has ever known. Statistics say that over 98% of American households have a TV, and it is in the "on" position for over eight hours per day in most homes. Collectively that’s nearly a billion "expression" hours each day. Yet the number of people that can convey their ideas to an audience via television is a tiny fraction of that.

We are very pleased that over the past 13 years


Did you find this article helpful?