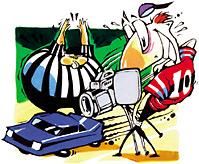 Most people that make video do so in solitude. There are a few reasons for this. Most people don’t know too many friends that have an interest in video production. Although now becoming more popular, making video is not a craft pursued by a significant portion of the population. Making the time to produce video is hard enough for some people. It gets complicated when you attempt to mesh your schedule with the one or two video-making friends that you know.

There are many activities in life that tend to be practiced in groups. These activities actually are a catalyst to bring people together to have fun. Sometimes people forget the activity and simply enjoy getting together (like bad golfers). Wouldn’t it be wonderful if making video actually presented an opportunity to socialize?

One of the reasons that making video is not a social activity is that it is not a real-time endeavor. When we play golf, we do so in real time. It’s the same with dancing and playing music. Making video involves so much preparation that there is really no performance. The actual execution of good videomaking skills is evident while the creator sits down and does nothing. There is no need to be present during the showing to display talent. I suppose that this is not unlike other art forms. Photography, painting, creative writing and woodworking are examples of talents that are difficult to illustrate in real time.

For years, I’ve been dreaming about video production as a sport, where the participants gather together in one place and actually compete in real time. The best idea that I’ve heard so far involved several camera operators competing all at once.

We actually tried this at one of our Expos. The camera operators stood on a basketball court while other "players" operated remote-controlled cars around the court. These cars were different colors. A caller would call out the targeted color and the camera operator’s challenge was to fill the viewfinder with that color. This required that each shooter zoom in and pan to follow the proper car. The caller would change the car every ten seconds or so, to make the process more challenging. More cars, more colors and more callers could make this sport even more difficult, even for the most proficient shooter. Judging could happen after the fact, like target shooting. Once the performance was over, the videotape could be played back and a computer program could measure the number of pixels of the proper color.

The judging could also occur in real time on large monitors. The audience could vote on the winner by applauding at the end of a round.

Another possible sports-related video activity is something like charades. The object of the game is to tell a story as quickly as possible.

We sometimes play this game ourselves on the night before a Videomaker Expo. We have absolutely no plan, and in one hour, we dream up and tell a two-minute story on video.

We have never tried this with multiple participants all at the same time.

Another idea is a video scavenger hunt. This requires that the competitors videotape objects on a list and deliver the finished tape to the judges as soon as possible. This is especially fun when there are several people on a number of teams. Afterward, it’s fun to watch the tapes as a big group while snacking on popcorn.

For years I have felt that the videomaking sport was about to come into its time. Maybe it will soon. If you have any ideas, please send them to me.