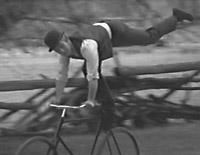 One of our chief goals in video editing is to engage the audience in our story. We can achieve this particularly well if we can evoke an emotional response like happiness, fear or anger.

Soviet filmmaker, Sergei Eisenstein recognized the importance of this and originated the idea of cultivating a predetermined emotional response by way of film editing. In 1924 he introduced an editing technique, still in wide use today, which he called a "montage of attractions." He discovered that he could evoke specific emotions in the audience by linking a series of visual images together. He selected a group of contrasting images and spliced them in rapid succession. As simple as it seems today, no one had done it before. The montage is now a fundamental editing technique that utilizes both the editor’s and the viewer’s mental resources.

Most music videos and TV commercials are comprised entirely of the montage. The average music video montage is about four minutes in length, while most TV commercials are 30 seconds long. The editor has a limited amount of time to draw the viewer in and make an impression that lasts long after the video or commercial is over. One of the quickest and most effective ways to do this is to evoke an emotional response in the viewer. In fact, the well-executed montage can generate the greatest impact in the shortest amount of time.

All video editors can make use of the montage. It is relatively simple and it has a vivid impact on the final video product. Interestingly enough, editing montages does not require a great deal of expertise. When I first began to edit montages for my own projects, I worried about synchronizing the images with the musical sound track. As learned, however, this isn’t as crucial as I first believed it to be.

If the pacing of the visual montage is quick, it is easy to understand that the pacing of the music should be about as quick. However, the synchronization process is not a required step to create a successful montage. The reason for this is that the viewer’s mind automatically synchronizes the images with the sound. As wild as this may sound, it’s true. See for yourself.

Edit a video, so that the beat and flow of the music matches perfectly with the moving images. (It can be a tedious and time-consuming process. For those using a nonlinear editing system, it is much easier than using VCR to VCR editing, but it still requires attention to detail.) Then take that same video and lay down a new music track with a similar tempo. You will notice a difference, because you, as the creator, have become intimate with the piece. However, if you show both videos to a family member or friend, most will not notice that one is in perfect sync and the other is not.

Music video montages and TV commercials are two noteworthy genres where montages are common, but the montage can be used in any video. You’ll notice the montage in 30-minute TV programs and in feature-length motion pictures. One example that springs to mind is from the movie Butch Cassidy and the Sundance Kid. During the montage, Paul Newman rides around doing tricks on a bicycle as B.J. Thomas sings "Raindrops Keep Fallin’ on My Head." This has absolutely nothing to do with the story, however the montage was used to break up the tension. This Academy award-winning movie chronicled two outlaws running from the law for most of the picture, so there was a need for some emotional relief. You can use the montage in the same way, to break up a portion of your video. When you juxtopose seemingly unrelated images next to each other you can give your videos a new or poetic or even radical point of view.

Give it a try, this week.