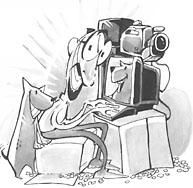 Sometime this year, you will witness the most profound change that has ever taken place in the pursuit of home video production. Since the development of the first camcorders, Videomaker has been reporting on interesting developments in the consumer video industry. Nothing we have ever covered in the history of the magazine compares with what will happen this year. The end result will be that editing video will become very easy for anyone to accomplish and millions of people will begin to do so. In addition, it will soon become very easy to distribute the final video program to millions of people.

In 1999, we expect to see most major PC manufacturers offer at least one affordably priced computer with video editing capabilities pre-installed. This will make video editing easier and potentially more affordable than ever before.

In the early days of home video, editing was very difficult to do well. Consumer VCRs were originally built to record TV shows off the air or playback pre-recorded videotapes. Manufacturers did not include features that helped users copy selected scenes from a camcorder or another VCR. Whenever someone attempted to copy selected shots to a home VCR, a "glitch" (a slight imperfection) would appear between each scene. The quality of the video was poor because the first VCRs were not developed with the assumption that users would make copies of copies of videotapes. Generation loss was a major problem. These two problems were addressed in recent years with the advent of home VCRs designed for editing, as well as higher quality camcorder formats (S-VHS, Hi8 and DV).

Lately, the most significant impediment for those pursuing home video production has been mastering the operation of the equipment. Many companies have risen to this challenge by releasing desktop video products–software and hardware designed to enable video editing on a computer. Since computers have become so easy to operate and so inexpensive, it was a natural eventuality that editing video on a computer would be considered easier for many users, compared with hooking a camcorder up to a VCR (and perhaps an edit controller and special effects generator).

It is indeed true that most people find editing video on a computer easier to learn than the traditional camcorder/VCR method. However, a few problems that have plagued desktop video in the past have been the quality of the video that an affordable hard drive can capture and the configuration and maintenance of a desktop video computer. In the past few years, high-quality, low-priced hard drives have become abundant, so now computers can easily capture high-quality video. However, the configuration and maintenance of a computer has not become any easier. A video capture card is required to digitize and compress the video so that it can be stored on a hard drive. The installation process is something that is intimidating and complex for many would-be desktop video enthusiasts. Occasionally the digitizing card will "conflict" with other cards or peripherals connected to the computer. This is especially true if the computer is being used for playing computer games. Because gaming challenges the computer’s ability to display images on a monitor, hardware and software developers in the computer gaming category are constantly developing new and innovative methods of squeezing as much display performance as possible out of a computer. These innovative methods often are not easily compatible with the needs of video digitizing cards. The bottom line is that installing a video digitizing card is more challenging than it should be, so only the bravest users attempt to do so.

During 1997, an interesting development occurred. A few companies began to sell PCs with digitizing cards pre-installed. These computers were configured for video editing right out of the box, so that the user did not have to hassle with the conflicts. These turnkey desktop video computers were challenging to locate in the retail channels, they tended to be expensive and they did not come game-ready. Also, these turnkey systems tended to be for professional videographers, as opposed to laypersons who wanted to play games and edit video on their PCs.

The decision of the PC manufacturers to ship computers with video editing capabilities built-in will change all that. Each year, these video-friendly computers will become more powerful, more useful and less expensive. Soon, millions of people will be making video not only for nostalgic purposes, but for basic communications needs. Just as we now use word processors, page-layout programs, still photographs, computer-generated slide shows and audio tapes, we will soon see video information commonly used for anything from a special interest half-hour TV show to a ten-second video memo.

These videos will be distributed not only on videotapes, but also more easily and efficiently via the most efficient transmission/receiving system ever known to mankind. Since all computers now ship Internet-ready, distributing video via the Internet will shortly become as commonplace as playing videotapes.