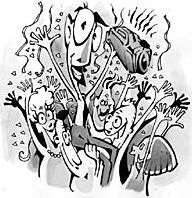 When my colleagues and I first started making video, many of us loved learning the magic behind the TV industry. I had a fascination with the art of making moving pictures. I had grown up watching lots of television. I grew to equate television with fame because, back when I was a kid, every TV program had an enormous audience. Prior to VCRs, everything on TV came into the home through an antenna via broadcast or over cable. There was no such thing as a special interest video or a wedding video. TV was the big time. The people in the TV business seemed very powerful and important to me. I bet that many of you felt the same way or had similar experiences.

I remember a dream that I had the night after I first edited video. In the dream, I had a profound appreciation for the power I had in making edit decisions. This appreciation focused upon the power to decide what I should include and when. I had the power to decide if a scene was worthy of inclusion or if a given scene would have been better had it occurred at another time. In the dream, I began to confuse videotape with reality. It seemed to me that I had the power to control what happened and when, not on a videotape, but in real life. I could fast forward or rewind time itself. I could omit things from history. It was an odd dream.

For me, the meaning of the dream is that there’s really nothing like making video. Creating TV programs allows us to express ourselves like no other medium. There are many ways for use to express our vision. We can write a poem, draw a picture, paint a portrait, sculpt a statue, throw a clay pot or compose a song, but nothing is like making a video. With video, we can vividly and realistically convey our ideas and opinions to others. Watching a video is very much like having an actual experience; video producers can control two of the senses of the audience–vision and hearing–in such a way that they seem to be temporarily present within the video. Because of the nature of video, TV programs can have a tremendous impact on the viewer.

Video, like other media, allows us to create something with a meaningful message. Our culture has much less permanence compared to that of our ancestors. Trends, practices and experiences are more fleeting than ever before. For this reason, the recording of our ideas, feelings and expressions, in whatever media, provide a great sense of meaning.

Let’s not forget that making video is also fun. It is thrilling to be in total control of what people watch on TV, even if it is only for a few seconds. It’s enjoyable to operate a camcorder. Passersby tend to give the camera operator respect and admiration. Video producers also like getting people’s approval after they view their video. It’s a blast to entertain friends and impress people with video. It makes us feel worthwhile and important. Seeing our own names in the closing credits on a television screen is really fulfilling. It’s just plain cool to make your own television.

Streaming video on the Internet, although thrilling, really isn’t like TV yet. The image appears in front of one person sitting two feet away from a computer monitor. The image is much smaller than full-screen, and it’s grainy and jumpy. However, streaming video is a very easy way to distribute video. We can expect the quality of streaming technology to improve every few months. At some point in the not-too-distant future, streaming video will be interesting enough to watch on a TV set in a living room. When that happens, we won’t tend to associate TV with fame and fortune as much as we do now. Not only will it be a thrill to know that people are watching TV content that we have created but it will better represent more people.

Whatever form it takes, it’s certain that entertaining or informing with a TV is a wonderful experience that is becoming more and more accessible to all.