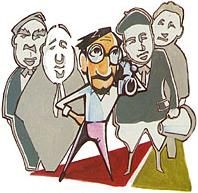 Anyone can use a camcorder, but telling a story with video is a completely different matter. Telling a story requires a reasonable command of the elements necessary to express one’s self. Understanding the elements of good storytelling–
including plot, characterization and setting—is the first step. Conveying these with methods and techniques particular to the video craft–
especially by using camera angles and editing—are the basic story telling skills that a person making video must have.

We strive in these pages each month to teach and explain the best, most innovative and most practical video storytelling methods and techniques. But when it comes to video, there’s only so much a person can learn from reading words on a page. For people interested in the art of video, there is much to learn from watching the great cinema masters at work.

The language of video, after all, is very similar to the language of film. Most of the basic elements were invented and/or discovered in the early part of the 20th century by the early pioneers of film.

We often forget to appreciate the value of these basic elements. Without these simple tools, it would be very difficult to tell a story with video. It is easy to forget that, at the time just after Thomas Edison invented the motion picture camera, all camera operators just pointed the camera at a subject and filmed it. Initially, there was no such thing as editing.

One of the first applications of basic editing appeared in the first U.S. documentary film, The Life of an American Fireman (1903). Filmmaker Edwin S. Porter intercut real fire footage with scenes of actors/heroes saving a child from a building fire. This elementary editing technique (intercutting between scenes) is at the basis of all video production today. Edwin S. Porter went on to make the first actual "movie," with a storyline and a script. It was the first movie with titles, which was very important because the movies were silent. The cards were valuable in conveying abstract concepts like "meanwhile back at the ranch." In his films, Porter used two camera angles and cut to other points of view and scene locations. Porter’s Great Train Robbery is widely credited with being the first narrative film to use editing as a plot device to create a sense of story direction. A scene of cowboys cutting telegraph wires in the desert, for example, cuts to a scene in the interior of the telegraph office where the operator is having difficulty receiving a message. A simple device, we think now, but this is the first cinematic example of "contrast editing," where cause and effect is shown through scene cuts. It’s a technique that’s been used thousands of times since, and one that any everyday videographer can easily employ.

Another one of the early pioneers of cinematic language was an actor that had worked for Porter. D.W. Griffith refined many editing techniques that Porter had left unexplored. D.W. Griffith discovered the close-up, the long shot and panning, each of which provided new tools to tell a story. Griffith produced hundreds of short films that experimented with various camera and editing techniques before moving on to his best known epic works, Birth of a Nation and Intolerance. With both of these works, Griffith also pioneered using the medium of film to explore controversial subject matter. This tradition survives today and is something that any videographer with a cause can do.

Everyone who reads this column was raised with television and movies. Sometimes we mistakenly assume that we simply "know" how to tell stories with video. Most of us tend to "see" the video in our minds. We script it, (sometimes) storyboard it, shoot it and edit it. However, if we study the work of these early pioneers, we can really learn something.

The great master filmmakers like Alfred Hitchcock, John Ford, Steven Spielberg and George Lucas can teach an aspiring video producer sophisticated storytelling techniques. The works of these artists are available at most video rental stores. By viewing them and using the pause and rewind buttons, you can really dissect the techniques of their directing styles. Instead of allowing yourself to be drawn into the plot of the movie, stay distant, and pay attention to the type and timing of each shot.

After doing so, go out and make a "video exercise" to see if you can duplicate one of their favorite methods of getting a point across. This is a great experience and it is very easy to accomplish. With a little practice, you too can incorporate techniques of the masters into your productions.