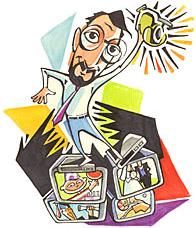 Let’s face it: there is no medium as pervasive as video. There are millions of TVs in the world. The television is on for nearly eight hours per day in the average American household. Because most Americans get their news and ideas from it, TV is powerful stuff.

With all this TV-watching going on, you’d think that more people would be interested in video production. Producing video is something that people enjoy. It allows for personal creative expression, which is very important in today’s world, where we are all flooded with the creative expressions of other people. Making video enables people to share the power of television, to spread ideas and influence an audience. The wielding of this power–even with a humble home camcorder–allows us to gain a feeling of pride and accomplishment, a sense of satisfaction at having completed an important task. Our finished video, even if it contains some noticeable flaws, becomes a piece of work that we can point to with pride.

For those making video with others, the process provides a wonderful environment for teamwork. Like team sports, videography allows us to synergize our efforts; when the video is complete, we see that the net sum of our effort is greater than the sum of the individual contributions of each participant.

There is no greater method of documenting or recording reality. Video’s ability to capture moving images and sound is absolute, convincing and comprehensive. Producing video makes us better communicators. It even trains us to improve our communication skills in other forms of expression, such as writing, speaking and the fine arts.

Making video is exciting and sexy. When people see a camcorder operator, there is an instant respect for the moment (especially when the camcorder is BIG). It causes observers to increase their respect for us. Why? Because people recognize the power of television in their own lives. Television seems so distant and powerful that anyone who can harness its power is seen as a near-supernatural messenger.

Because TV is pervasive in our society, the appearance of a subject in a video program automatically raises his or her credibility in the viewer’s eyes. Even if the subject is portrayed in a bad light, the fact that they are worthy enough for to be the subject of a video makes them more important and credible. Text is not quite as valuable in this way, nor is photography. If you make a video about "The Secret Life of Fleas," the video instantly makes the viewing audience pay more attention to fleas.

With all of these things going for it, why is video production not practiced by more people? For one thing, making video can be complicated. It involves learning the controls of a camcorder and a variety of video editing gear. Many newcomers don’t get satisfactory results, because making video involves a multitude of disciplines. Lighting, sound recording and directing talent are but three examples of crafts that are worthy of devoting an entire career to, yet videographers must learn all three–and more–if they are to be successful in their craft. It isn’t an impossible task though, and by learning the basics, which come quickly once you immerse yourself in video, even a relative newcomer can make compelling videos.

Some newcomers have difficulty determining what gear to buy. They are concerned about compatibility, obsolescence and price. These concerns are roadblocks in the path of the greater democratization of the craft of video. On the flip side, the video gear that’s coming out now is cheaper and easier to use than ever before.

Assuming that you are reading this magazine because you have already committed yourself to becoming a proficient videographer, I congratulate you. You should be proud of all of your hard work and efforts. It is people like you that help utilize television to bring it to its greatest potential.