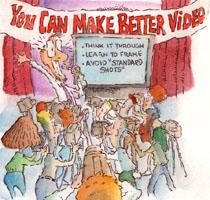 You Can Make Better Video
There is always room for improvement in whatever we do, video producing is no exception. However, making a good video can be so challenging for some that they grow weary and begin to doubt their abilities. It is very important to remain motivated. Here are a few tips that can make a difference.