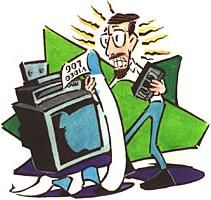 Why is it such a chore to log videotape?

One of the most frustrating things about videotape is the lack of a simple,
reliable system for keeping track of what’s on each cassette. There’s no
way to see what you have recorded without writing notes as you record. Then
you end up with cassette boxes stuffed with bulky paper or, even worse,
you lose the notes and have to play back the tape while you recreate the
index list. It really is a significant problem, especially if you like to
record a lot of video.

Professional broadcast studios and others who make video for profit use
a similar method. They hire staff (usually low-paid interns) to watch tapes
and write down descriptions of the footage. The task is still cumbersome–they
have just shifted it to a low-level employee. Most Videomaker readers
do not have this advantage. I wish there was a better way of logging camcorder
footage.

Some people simply write the index (or table of contents) on the videotape
label. These labels are very small, however, so it’s hard to include a complete
index on them. Some diligent people create a more complete index in the
form of a log sheet and insert it into the VHS sleeve but it is easy for
this to get misplaced. With all the advances in electronic technology, I
don’t know why someone has not solved this problem already.

Wouldn’t it be wonderful if all videotapes had a small index or even a
booklet, that you could hold in your hands like a TV Guide? This would be
the easiest way to navigate around a videotape. Many people already use
something like this but each one needs to be prepared by hand (typed or
handwritten). Several companies make videotape labels, but there are no
standards. The labels and index cards or booklets differ from company to
company.

One of the things that I like best about computers is the file management
system. It is easy to review all of the files on a floppy disk, for example,
by popping it into the drive and viewing the directory on-screen. Wouldn’t
it be great if a VCR had this feature?

One company, Gemstar, has developed something to help in this area. Their
Index Plus+ technology is a user-friendly system for finding and playing
back taped programs. Although it was created for the "time-shifter"
television viewer, it is tempting as a technology that could help videographers
as well. (Gemstar also makes VCR Plus+ which is a feature built into a VCR
that allows users to easily set the timer feature to record a TV show.)
Index Plus+ is an indexing feature that automatically captures program titles
during recording and then displays them in an on-screen directory. The technology
can also display and store program-related text information that may be
supplied by broadcasters. Index Plus+ was not designed for use by people
editing video tapes, but it can be helpful to anyone with the desire to
know what is on a videotape and where things are located on the tape. It
would be very useful for videographers if manufacturers included the Index
Plus+ technology, or something similar, in consumer camcorders.

I have yet to see a complete non-computer-based system that allows you
to log a tape in a database, then print labels and a handy index. Using
the database function the user could search for an individual scene on some
original footage that they had shot with their camcorder. Some computer-based
tape logging systems come close to offering this kind of functionality,
but they’re difficult to use on a day-to-day basis. Videographers could
really use a system that recorded an index on the videotape which any VCR
could read. Somehow I can’t imagine a product like this being unavailable
in a simple, inexpensive, easy-to-use form.