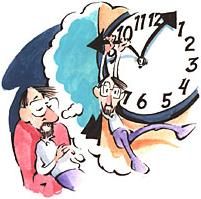 My first experiences editing video made an enormous impression upon me.
I’d had some experience editing film, but video was very different, in that
my edit decisions could be executed and viewed very quickly. I remember
specifically the night of my first video editing experience as the apparent
power that I had as an editor captured my subconscious. My dreams that night
were unusual–I felt as if I had the ability to "edit" the present
reality or real life, to control the essence of time itself. The experience
of editing the past had lead to a dream about editing the present.

This awareness of the power of a video editor to control the essence of
time itself has some truth to it. When someone sits down to watch a video
program that you have created, you have a great deal of control over his
or her time. Depending upon the situation, the audience has varying degrees
of control over its own time. For example, if someone was playing your program
on a VCR at home, he might be tempted to hit the stop button or the fast-forward
button. If your program was being broadcast, a viewer could be tempted to
channel surf. If you were showing your video at a screening where you were
present, most people would sit through the entire program. Good manners
(hopefully) would prevent them from walking out. Any way you look at it,
you do have a degree of control over the time that your audience spends
in front of a TV, and therefore you have control over its time.

Most people who make video take this serious responsibility too casually.
Remember to be kind to your audience. Keep your presentations as short as
possible. The broadcast industry has settled upon 30 minutes as a standard
program length because this works very well for it. If your program is not
appearing on broadcast TV, however, there is no reason to commit to the
30-minute standard. Make your videos as short as possible to present the
necessary information. Use images to tell your story quickly and avoid narrative
rambling. A helpful habit to get into is to begin every video project with
an end in mind.

Shorter videos also work best if you are using the Internet as a distribution
method. Right now, very few people are streaming video through the Net because
it is slow, grainy and jumpy, but it is getting better every month. There
is no doubt that before long the Internet will be the major video distribution
tool for the types of people who read this magazine. Video on the Internet
must consume limited resources like bandwidth and silicon. This means that
short videos are very practical for the Internet.

As Internet video multiplies, there will soon be more than enough for viewers
to choose from. They will be intolerant of "programs" that ramble
or run on too long when another video is just a click away.

Those who make industrial and training videos for captive audiences might
be tempted to ignore this caution to produce shorter videos. But I think
it’s a mistake to try to pass off a long program to this type of audience.
Remember that viewers can still channel surf in their minds if your video
doesn’t get to the point soon enough.

Shorter videos improve the quality of life of the video producer. In their
attempts to emulate TV, beginners tend to start out with a 30-minute project
and have a hard time finishing it. They underestimate the time required
to shoot and edit a 30-minute video. All too often, newcomers quit before
they complete their first projects and never become the video producers
that they have the potential to become. Let’s not forget our original goal:
to send a message to an audience.

Short videos are good videos for producers … and viewers.