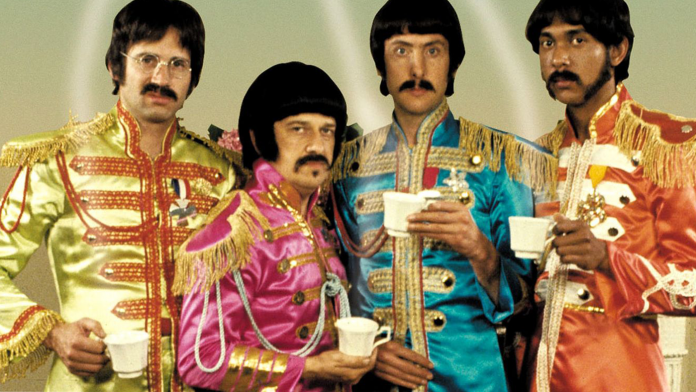 You could argue that the first films ever made were documentaries.

As early as the late 1800’s, motion picture pioneers tinkered with continuously-running photographic equipment in order to study natural phenomenon and how the world worked. Actuality films of birds in flight, bodies in motion, cityscapes and historic ceremonies were the first cinematic attempts to document and better understand the world.

It could also be argued that early documentary makers like Robert Flaherty (Nanook of the North, 1922) were bending the fact film genre even as cinema itself was still finding its legs. When Flaherty had subjects in his anthropological documentaries re-enact the ‘reality’ of their lives, he essentially launched docudrama as a subgenre, a fact and fiction hybrid which remains the staple of historical documentary making today.

But who would have anticipated that after all the shape-shifting the documentary form has undergone the genre would produce something as self-deprecating as the Mockumentary?

Mockumentary: A television program or film which takes the form of a serious documentary in order to satirize its subject. (Oxford)

Of recent notoriety is “I’m Still Here,” directed by Casey Affleck. The popular Hollywood actor didn’t tell the media his 2010 fly-on-the-wall doc about the ‘lost years’ of actor Joaquin Phoenix was fake. After the film’s release Affleck and Phoenix revealed that their script about Phoenix trying to make it as a rapper was made as a send-up of celebrity culture.

When fictional events are presented as actuality in a fake documentary, the result is usually docucomedy. Monty Python alumnus Eric Idle is credited with inspiring the mock documentary movement with his 1978 Beatles parody, “The Rutles – All You Need Is Cash.”

In his 1984 mock-doc classic “This is Spinal Tap,” Rob Reiner chronicles “the most famous band that never existed” and manages to invent new ways of mocking the ego-laden world of heavy metal. Reiner resorts to well-worn rockumentary tropes – the intimate  interviews, off-stage ‘actuality’ of private moments and the band’s grueling climb out of oblivion.

Reiner and writer Christopher Guest (“Princess Bride,” 1987) worked with an outline and a loose story arc. Shot documentary-style over 35 days, the first cut of the film was seven hours long: Three hours of fake concert footage and ‘actuality’ of the band and four hours of interviews. “It took me nine months to cut that film,” says Reiner. “We shaped it in the cutting room. Basically the writing was done in editing.”

In 1957 the popular BBC magazine show “Panorama” broadcast a three-minute travelogue segment about the bountiful spaghetti harvest in the Swiss Alps.

Despite the April first dateline, many loyal BBC watchers were indeed fooled by their public broadcaster’s Swiss Spaghetti Harvest hoax, calling in after the show by the hundreds for spaghetti gardening tips. The “Spaghetti Story” segment that launched the fake doc genre on television was presented with solid visual storytelling and professional BBC production values  – images of aproned women plucking the crop from heavily laden spaghetti trees, the careful laying out of strands to dry in the sun and finally the celebratory clinking of wine glasses over a freshly harvested spaghetti meal. What made these fake actuality scenes believable was the ‘unimpeachable authority’ of “Panorama” anchor Richard Dimbleby’s narration.

Documentary teachers to this day screen “Spaghetti Story” as a teaching aid to help students spot the form’s conventions: actuality or on the spot footage, references to experts and statistics, regional music to evoke a feeling of place, stereotypically happy locals, ‘b-roll’ of local color and of course, to tie all the elements together, a narrator with “enough gravitas to float an aircraft carrier.”

Long before reality television gave us docusoaps and permanently blurred the lines between documentary and scripted programming, faux documentary came to American TV from an unexpected direction.

The 1976 “Interview” episode of the popular CBS sitcom “M.A.S.H.” (1972-83) has gone down in broadcasting lore as the first fake American TV doc. After season four was in the can, network execs ordered up two extra episodes to add to the schedule but after churning out 22 shows, the writers and producers were out of ideas.

Inspiration came in the form of TV journalism pioneer Edward R. Morrows. In a 1952 episode of “See It Now,” Morrows had aired a Christmas report he shot in Korea for CBS in which U.S. soldiers shared what it was like to be in that war. “M.A.S.H.” writers, who used the show to comment on the futility and madness of war, wanted to mirror Murrows’ report.

Writer/director Larry Gelbart recalls the process: “We had an intern go around asking the actors key questions about the war. We then transcribed those (improvised) answers and I polished them.” Clete Roberts, a war correspondent, played himself as he ‘interviewed’ the unit’s fictional characters about their war experiences using the re-worked pre-interviews as a framework. “Then we took all that footage and chopped it up,” says Gelbart. “The script was printed up after the final version of the show. CBS showed tremendous faith in letting us do a show to which they had not seen the script.” Staying true to documentary form, the network aired the “Interview” episode without a laugh track.

The groundbreaking “M.A.S.H.” episode paved the way for other shows like “The Office” and “Modern Family,” which incorporate an unseen documentary crew into the premise, making for new ways of storytelling.

When mockumentaries aren’t generating laughs through hyperbole, stereotypical characters and over-used doc cliches, these docutainments can be delivery systems for broader critiques of culture and society. The mockumentary playlist is diverse and worth exploring.

Kenny 2006 – An Australian mock doc about the personal life of a plumber who specializes in delivering and maintaining portable toilets at big events. (dir. Clayton Jacobson)
Chalk 2006 – Improvised faux doc about the reality of a teacher’s life a send-up of the ‘inspirational teacher’ movie. (dir. writer : Mike Akel, Chris Mass)
Borat 2006 – Cultural satire by Baron Cohen. (dir. writer: Larry Charles; Sasha Baron Cohen)
LolliLove 2004 – Improvised mock doc about a young couple who help the homeless with inspirational slogans and lollipops. (dir. writer: Jenna Fischer and Peter Alton Fischer)
Bob Roberts 1992 – Influenced by This Is Spinal Tap writer, director Tim Robbins uses the fake documentary form to poke fun at the political system.
Zelig 1983 – Early adaptor of mockumentary Wooden Allen chronicles the life of “human chameleon” Leonard Zelig who can take on the characteristics of anyone around him.
The War Game 1965 – A fake but very realistic news report about a Soviet nuclear attack on Britain was so controversial it wasn’t aired by BBC until 20 years after it was made. (dir. writer: Peter Watkins)