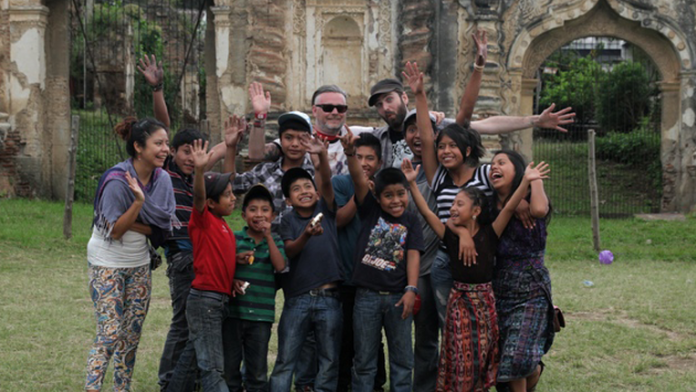 In documentary production we’re not talking about the hour of journalistic access it might take to shoot a quick interview and some ‘B-roll’ for a news item or a current affairs story. If subjects are not willing to let you into their lives in a meaningful way over a period of months or more, including repeated interviews, you won’t be able to capture the unfolding story of your main characters in a way that permits audiences to identify with them.

Just because you’re planning to make a doc about a noble cause or an irresistible character, it does not follow that participants will line up around the block to populate your film or to let you into their world. When you plan to use people’s lives as your raw material you first have to win their trust.

Trust is the foundation of the filmmaker–subject relationship. Australian film director Scott Hicks (Shine; glass: a portrait of Philip in twelve parts) says his approach is to come into a project without an agenda.

“You go in and explain to people [participants], I do not come here with a preconceived notion of how to represent you to the outside world. That’s your job,” says Scott. “[You tell them] I want to be educated, I know nothing. You tell me what’s your story. And you’ll be amazed at how responsive people get.”

When ‘casting’ participants to be in your doc, ask them about what’s going on in their life at the time you’re planning to shoot. Ideally, you want access to the kind of footage that shows your characters going through something. It might be an event, a move, a journey of some sort that you can structure with a beginning, middle and end, a story arc.

If they’re telling you their story in an interview you will want access to visuals to illustrate their account, this can be actuality of them at work, at home or at play, but also ask if there are any archival photographs and video you can access.

Transparency, openness and honesty about your intentions are the keys to opening the doors to access and keeping them open. If you’re not straight with your subjects from the outset, they might go back on a promise to participate when things get uncomfortable and personal.

Transparency, openness and honesty about your intentions are the keys to opening the doors to access and keeping them open.

Filmmakers are always relying on somebody else for access. Jennifer Fox (An American Love Story) suggests winning the trust of a “reliable guide,” somebody who is well respected in the world of her characters. Director Ricardo Gaona (Parque Central) concurs. His film about shoe shine kids working in a park was made in Antigua, Guatemala.

“The first several days we were wandering around trying to find our subjects,” writes Gaona in Filmmaker Magazine. “Problem is nobody trusted us. Then one night at a bar — going out and socializing is important — we get hooked up with a guy who works with the kids. The next day he walked us into the park and the kids come straight to him. Kids that wanted nothing to do with us suddenly were flocking to us. They trusted him and now they trusted us.”

For veteran doc maker Nettie Wild (FIX: The Story of an Addicted City), a key event in the director-subject relationship is when she gets an unsolicited phone call from her subject. “When you get advanced warning that something is going to happen,” she says, “then you know you’ve gained their trust.”

Nice and easy does it

In general, ease into the relationship with your subjects. Don’t bring your camera to the first meeting. It’s important to listen to what they have to say and to let them tell you their story before filming anything.

Screening a previous documentary you’ve made that shows how professionally and empathetically you’ve treated your subjects can win over potential participants for your next film.

When shooting begins, don’t just shoot and scoot. Arrive early and stay late, spend some time with your subjects to demonstrate your interest in them and what they do beyond the footage you want to capture.

In between shoots keep in touch with your participants, share with them the progress of the project and your next steps.

If you have any commercial aspirations or broadcast intentions for your doc you will have to get all the participants featured in your film to sign appearance release forms. Failing to do so can get you into a legal bind when a subject decides they didn’t like the way they were represented in the final version of your film.

A signed release is the ultimate trust test between director and subject. The participant agrees to assign all rights for the use of his or her image to the filmmaker without restriction and in perpetuity. A release should also protect non-actors in a documentary from being misrepresented by having their image and words misused.

Securing a location release signed by property owners of places you shoot is also a good idea. A location release typically includes permission to bring crew and equipment onto the premises and the right to include the name and logo of the establishment in the film.

In documentary production access is about trust and permission. Cultivate trust by taking an authentic interest in your subjects and permission to shoot will follow.

Peter Biesterfeld is a seasoned script-to-screen television and video producer and trainer with a specialty in documentary, current affairs, reality television and educational production.