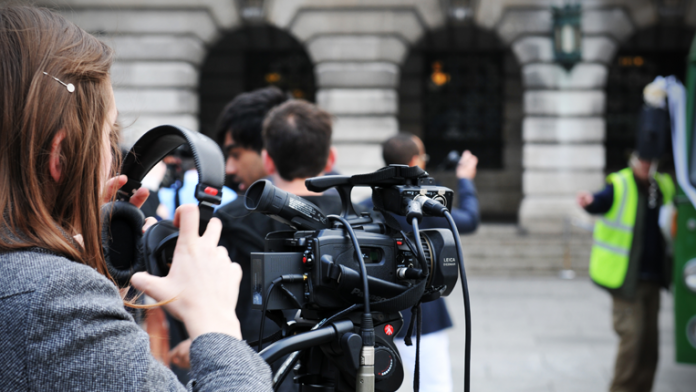 We had to ask couples to turn radios off, both in the car and in the home, in anybody’s home. The wedding singer or DJ never made it into the show, maybe some visuals but not what they were playing. Clearing the rights to use what was on the radio or coming out of the speakers at the wedding reception would have been expensive and complicated to clear for use on TV.

Once our producer grudgingly forked over $1,500 to use 15 seconds or less of the wedding party singing “Happy Birthday” to the grandmother of the bride. The Warner Music Group, who bought the rights years ago, collects two million dollars a year from the use of the “Happy Birthday” song.

Architectural structures, buildings and landmarks can be copyright protected, examples include the American Stock Exchange, the Apollo Theatre in Harlem and the Hollywood sign.

As a documentary maker you should know what the rules are for shooting in certain  publics spaces, but more important, you should also know your rights when it comes to fair use of footage containing incidentally recorded images and sounds that are  copyright protected.

Fair use is a legal doctrine that promotes freedom of expression by permitting the unlicensed use of copyright-protected works in certain circumstances —
The U.S. Copyright Office

Fair use is dealt with in section 107 of the U.S. Copyright Act under “Limitations on exclusive rights.”

In recent years, industry gatekeepers have made increasing demands on filmmakers for copyright clearances. Documentary advocacy groups have pushed back not to have copyright rules so stringently enforced, to give filmmakers a break and to win universal acceptance of fair use principles.

In 2005, an alliance of national and international documentary organizations  published a joint report, “The Documentary Filmmakers’ Statement of Best Practices In Fair Use.”

Here’s the principle: Doc makers should be protected from being made to falsify reality by turning off the radio for example, when it’s part of filmed actuality, or by having to digitally erase a corporate logo from a street scene or having to scrap a street musician’s performance of a copyright protected song.

At the heart of all documentary work is its value to the audience, to the public. The public good is also the key to invoking fair use principles.

“You can invoke fair use when the value to the public of what you are saying outweighs the cost to the private owner of the copyright,” — The Center For Media & Social Impact at American University

If a company takes legal action against you for copyright infringement because you filmed their corporate logo, under the law you can invoke fair use if the public good outweighs the cost to the copyright owner in the way you use the logo in your film.

If you made the logo’s design the centerpiece of an animated movie or some other imaginative work, it’s not likely you’ll find anybody supporting your claim of fair use. You’re ripping off somebody else’s design and making money from it.

But if you’re making a factual film about the company and footage of the logo on the office tower appears in your documentary this could qualify for fair use of that footage because it does not infringe on copyright’s fundamental purpose, “to encourage creative expression.” Also, in the eyes of an industry gatekeeper, the public value of what your film is about might outweigh the cost to the copyright owner.

Fair use limitations cited in “Statement of Best Practices” caution documentarians to take care that:

According to the copyright act, non-fiction usage such as comment, news reporting or holding the copyrighted work up for critical analysis in a documentary may qualify as fair use. Employing copyrighted material as the object of social, cultural and political critique is ok according to “The Documentary Filmmakers’ Statement of Best Practices In Fair Use.”

If you’re a doc maker, let “Best Practices” be your fair-use Bible, it’s a comprehensive compendium of everything you need to know to about shooting in public and avoiding onerous copyright clearances.

Last word: Be sure to give credit to creators of copyrighted work you used in your film. It’s not in the copyright act but it is good etiquette.