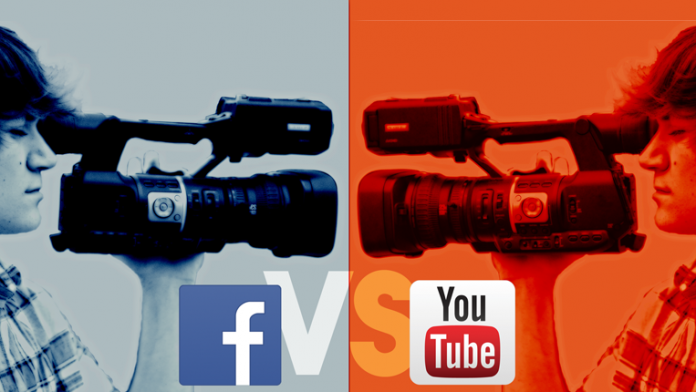 Finding the right place to host your video raises several questions. Leading platforms YouTube and Facebook each have their own benefits and drawbacks. Navigating the pros and cons of each service can help provide a clear idea of where you want to host your content.

Navigating the pros and cons of each service can help provide a clear idea of where you want to host your content.

YouTube is the predominant video sharing platform; with years of building their brand, it has become the go-to for for online distribution.  It’s easy to assume this is the best place to upload your shiny new masterpiece. However, Facebook has been making strides to create its own network of channels and, depending on your goals, could be a more appropriate place for your video to be hosted.  Let’s examine a few aspects that should help you pick which is right for your project.

Part of determining where to put your work is how your video will look and sound.  Each site has its own recommended settings for optimum playback.

According to Facebook’s help page, they recommend: h.264 video with AAC audio, as an MOV or MP4; aspect ratio of 1280px wide or smaller, divisible by 16px;  30fps or less; and stereo audio, sampled at 44.1khz. They also state files must be 1.75GB or less and the video may not be longer than 45 minutes.

YouTube has it’s own recommended settings. They suggest an MP4 container, with h.264 video and AAC Audio, sampled at 48 or 96.6khz. All video must be progressive scanned and they accept a wide range of frame rates, with resolution up to 8K. Initially, you can only upload videos 15 minutes long or less, but this can be extended by verifying your account.

Based simply on recommended settings for the two sites, YouTube has an edge, allowing higher resolution, audio sampling and a wide range of frame rates. Although initially they only accept 15 minutes of video, that is easy to change and most of your content should be well under this limit anyhow. If your primary goal is that your video have the highest quality, YouTube could be the end of your search.

However, as much as we all love a polished product, at the end of the day what matters is engagement. Actually getting your video in front of your audience is the name of the game.

Getting To Your Audience

YouTube, which is considered the #2 online search engine, processes billions of searches per month. Acting as a repository, YouTube is the destination for viewers looking for specific content with the right rail driving traffic by showing the viewer similar videos to the one they just watched.

YouTube has dedicated apps on most next-generation devices, from smartphones to gaming console and TVs. The platform is already integrated for widespread linking around the web, making it easy share your work elsewhere. YouTube also makes it easy to track viewer information with their analytics and simplifies driving traffic other site through tools like annotation.

Facebook has it’s own up-sides. As a social network and personalized experience, users check their news feed frequently. Rather than seeking out specific content, Facebook selects and delivers it to the viewer in between pictures of their college roommate’s dinner and their cousin’s new baby. The social format makes commenting and sharing — the sought after engagement — seem more intuitive for the viewer.

Traditionally, people uploaded to YouTube, then linked to Facebook.  However, now a video uploaded directly to Facebook autoplays and the the thumbnail is over twice as large on the news feed compared to material linked from other sites. These differences make it so that on Facebook, natively hosted video is naturally more visually appealing and more likely to be viewed compared to material linked from other locations.

Still, Facebook’s best tool is the vast wealth of demographic information they collect from their user base. Their highly sophisticated targeting abilities can deliver your video right to the eyes of those more likely to be interested.

In making a choice we should also recognize some of downsides of each platform.

YouTube videos just don’t move as fast. They tend to get less shares and comments, and the ones they do get come slower.

However, by the same token, Facebook posts have a shorter lifespan. In the stream-like flow of the news feed, once a video stops getting likes and shares it quickly sinks to the bottom, rarely to be heard from again. It’s hard to search for old Facebook videos and linking to them directly is problematic. These are huge hurdles.

Each platform has its appeal and neither is perfect for every application. By prioritizing our needs and goals we can pick the right place to put videos. An important and time sensitive clip might be best served on Facebook where it can be shared quickly and then fade away. On the other hand, a demo reel would be better served on YouTube, where its craftsmanship will shine and it can be easily found for an extended time.

Erik Fritts has a degree in Film and works as a Multimedia Specialist.  He is an award-winning writer, photographer, and filmmaker.  He loves classic cinema, gardening, and his dogs, Durga and Kali.