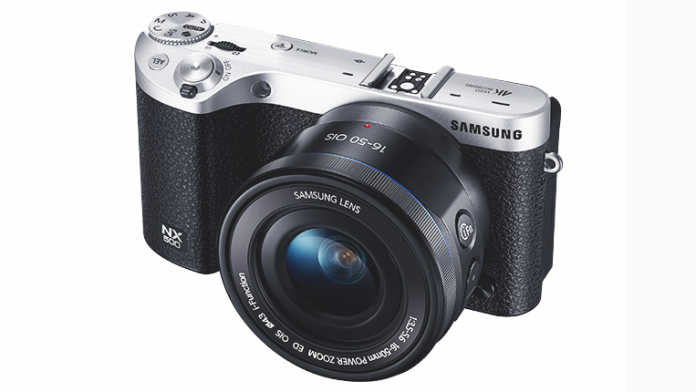 The NX500 looks like something straight from the 70s, with its retro-inspired aesthetic. It comes in either black, brown or white. It's light-weight and has just the right amount of spinning controls. Buttons are low profile, but not completely flat and flush with the camera body. Overall, the most important the controls you need for video are exposed, meaning for the most part you won't need to dive into menus in order to change settings. There are dedicated wheels for adjusting shutter speed and aperture. ISO has a dedicated button which changes the purpose of either of your exposure wheels to adjust ISO until a new value is selected.

The Super AMOLED screen is tillable and looks great. Images are sharp and colors are vibrant. In our tests, the screen's contrast is relatively faithful to the captured video, but we wish the screen was brighter. Since there is no viewfinder of any kind, the AMOLED display is the only means of setting up shots, and it can be difficult to see under bright sunlight.

The NX1 ships with three re-assignable buttons. One is already assigned to Video Standby mode, which basically changes the aspect ratio and frame rate of the AMOLED display to match your video format and displays, so we didn't touch that. The second — pre-configured as EV — we changed to white balance, as that is one of the few important settings without a dedicated button. For the third, we really wanted to assign audio volume adjustment, but alas, it was not an option.

Obviously the most important feature of the NX500 is its ability to shoot 4K video. Thankfully Samsung provides both UHD (3840 x 2160) and DCI (4096 x 2160) resolution formats. DCI is limited to 24 fps and UND is locked at 30fps. At only $800, the NX500 is the only interchangeable lens camera under $1,000 capable of shooting 4K video. However, affordable 4K video doesn't come without its drawbacks.

The first, and in this author's opinion, biggest drawback to shooting 4K with the NX500 is the added crop factor. The APS-C sensor inherently applies a 1.5x crop factor to the lens. On top of that, the NX500 lacks the horsepower needed to resize a full sensor sampling of 4K video to UHD or DCI resolution in real time, so it takes a center-crop of the sensor to eliminate the need for resizing. The result is an added 1.6x crop factor. Do the math and you're left with a 2.4x to 2.5x (because these aren't exact numbers) crop factor when shooting 4K. What does that mean for you, the shooter? It means the 16-50mm lens that ships with the NX500 is a 35mm equivalent of a 38-120mm lens when shooting 4K, and a fisheye 10mm lens is more like a 24-25mm. Be prepared to physically back up when framing your 4K shots with the NX500. Thankfully, this added crop isn't present in 1080 or smaller resolutions.

There's a lot here to play with, and anyone who shoots photos to share instantly will have a lot of fun.

For shooters who like to tweak with picture styles — Picture Wizard as Samsung calls it — Samsung offers a robust selection of presets that are similar to what you might find on Instagram — retro, vivid, forest, etc — plus three custom slots. In each slot you can individually tweak the RGB channels, saturation, sharpness, contrast and hue. There's a lot here to play with, and anyone who shoots photos to share instantly will have a lot of fun.

Video shooters looking for a color profile that provides maximum latitude in post might be disappointed. Neither normalizing all Picture Wizard settings nor disabling Picture Wizard entirely yields a cinematic, flat look that you might find from something like Technicolor's Cinestyle for Canon cameras.

We mentioned earlier that there's no way to adjust the microphone volume without diving into a menu. That's not as bad unfortunate as it sounds, since the NX500 doesn't have a microphone input (that's the unfortunate part), nor does it have a headphone jack. As a result, there's almost no chance you'll want to record audio to the NX500. Sending a mic to an external audio recorder and syncing in post is effectively required. Samsung's external EM10 microphone does work with the NX500, sending a digital audio signal through the hot shoe. We're hoping that they take this technology further and make a hot shoe accessory that accepts an external microphone.

Not surprisingly, the NX500 is WIFI and NFC capable. For stills, that makes it an amazingly fun Instagram machine. Videos, however, can't be transferred via WIFI or NFC thanks to the h.265 file format the NX500 uses, which we'll get more into later.

There is no dedicated video shooting mode on the NX500, but it does have a standby mode, which effectively serves the same purpose. As mentioned, it changes the aspect ratio and frame rate, and also gives you audio volume meters. Additionally, it strips the photo-specific aspects of the UI away, leaving you only the information you need on the display. The NX500 offers zebra stripes for monitoring exposure, as well as digital zoom and focus peaking for focus assist, though the latter, sadly, isn't displayed in standby mode. These features are always good to see on a consumer camera, and the focus assist features are especially appreciated considering the 4K resolution. One bit of info we'd have liked to see on the screen was how much additional video can be recorded before filling the SD card.

Speaking of video duration, one thing you'll notice when shooting 4K video with the NX500 is the X/15:00 counter at the top left of the screen. That's because the NX500 is limited to shooting 15 minutes of 4K video at a time. On other cameras, recording simply stops and instantly restarts at the record limit, but the NX500 will just stop, requiring you to hit the record button again to continue shooting. At 1920 x 1080, that limit is increased to 29:59, regardless of frame rate.

We had mixed results with the included kit 16-50mm lens. In general, low-contrast shots were sharp. Easily as sharp as what you might expect from from a camera at this price range and potentially as sharp as many higher-dollar DSLRs. In high-contrast shooting situations — under direct sunlight for example — there was some blooming around very bright edges. This effect wasn't noticed, however, when using upgraded lenses including Samsung's 18-200mm f/3.5-6.3 or their 50-150mm f/2.8. Overall, we had no complaints with the NX500's sharpness and other than the 16-50, Samsung's lenses impressed.

Dynamic range was, as expected, somewhat limited. Even with Picture Wizard completely flat, video from the NX500 feels TV-ready; that is, it'll look great going straight to your TV with no color correction needed. That's wonderful for shooters who don't want to mess with their footage in post, but somewhat limiting to those who want maximum color grading latitude.

The same can be said for the NX500's saturation and color reproduction. You should expect to not need to boost the saturation in post. Normally we like being able to selectively turn up the saturation, but in this case, it feels like the color accurately represents what's seen with the naked eye. Every time we moved saturation slider up in post, the images began to feel unnatural. Again, this isn't a bad thing, but it's worth knowing the NX500 is giving you everything it's got in terms of color before you start your color correction.

Low-light on the NX500 goes from pretty great to pretty bad pretty dang quickly. When shooting under a desk lamp, we found that noise was minimal up to 3200 ISO. In fact, the difference between 100 and 3200 ISO is minimal enough that you can confidently move between them and get highly usable footage throughout the range. Strangely, the increase in noise between 3200 and 6400 ISO seems disproportionately high compared to the lower ISO levels. As a result, we can't recommend shooting 4K video at 6400 ISO, even though 3200 is very easily usable.

We did notice a slight bit of moiré and aliasing in very fine detail, though it's never really bothersome, even in very, very tight line patterns. In our experience, resizing 4K footage to 1080 makes aliasing nearly unnoticeable.

Thankfully, rolling shutter is surprisingly not terrible in 4K on the NX500, and downright good in 1080. We were very happy to see this, considering the higher-priced NX1 had particularly bad rolling shutter at the same resolution. The NX500 is notably better in this regard. Feel free to shoot all the hand-held 1080 video you want with the NX500 and never worry about the jello effect. You should be fine.

The NX500 records all video to h.265, which is great in a vacuum. H.265 video looks just as good as h.264, yet comes in a much smaller package. Files one third the size of their h.264 counterparts are normal. That means you can store quite a bit of 4K footage on a single 64GB SD card. However, as of the time of this writing, neither Windows nor Mac OS X supports h.265. Neither do any of the major video editing apps like Adobe Premiere or Final Cut Pro X.

To help with this, Samsung includes Movie Converter software to transcode the NX500's h.265 files to the more usable h.264 standard. The transcode speed is, however, painfully slow. If you've got a full SD card worth of 4K video, you can expect to spend several hours transcoding, even on a very fast computer. Other options, including Wondershare, are reported to be much faster.

Who should buy it?

After spending some time with the NX500, we've concluded that this is a camera reserved for the 4K early adopter. At less than $1,000, it is priced perfectly for the video shooter looking to round out a complete 4K setup that may include a 4K action cam, external mic and recorder, and a moderately powered computer.

While h265 is a pain, and the lack of a microphone input is a disappointment, it's simply not enough to take away from the fact that the NX500 is the best (only) interchangeable lens camera that shoots 4K that will run you less than $1,000. This image quality is pretty good for the price, and shooting with an upgraded NX lens makes it even better. With the right lens and lighting, you could probably get away with passing it off as professional as long as you're not shooting “The Avengers 3.” The bottom line is, if you want to get into shooting 4K today and are on a tight budget, we simply can't help but recommend the NX500.

The Samsung NX500 is imperfect, but delivers where it counts: a strong sensor, good image quality and 4K video at less than $1,000.