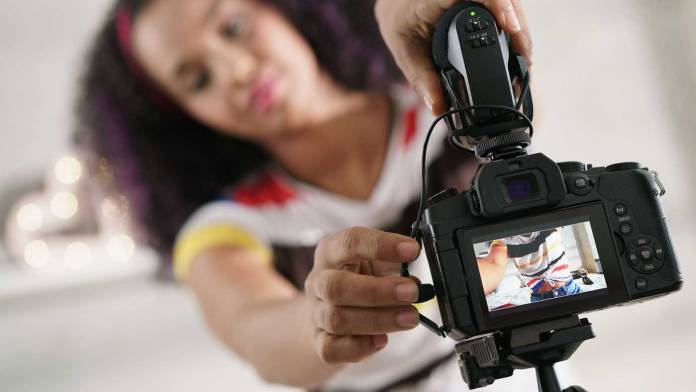 Before starting VEDA, I did some research. To my surprise, many vloggers create videos shot, edited and posted using their phones. With that as a major encouragement, I realized I already had the tools; the key to vlogging was to persistently find the time in my day to shoot and post a video not much longer than five minutes. So if the idea of vlogging is something you are pondering, here is a quick rundown of some of the essentials to the perfect vlogging setup

We’ll start with the camera, and like I’ve already stated a smartphone would do just fine. They generally have a great camera for capturing video, and they also come with a decent mic for recording sound.

Looking past the smartphone option and stepping it up a little, Amy Schmittauer of the YouTube channel Sexy Savvy Social, an entrepreneur, social media expert and lifestyle vlogger, uses the Canon Powershot SX 40 with wide-angle capability, front facing display, flash, and a quality mic built. This is an older model camera, but the current equivalent is the Canon Powershot SX 410. The front facing display on Schmittauer’s camera is especially useful for vloggers as it helps you keep an eye on what’s in (or out of) frame.

A front facing display can be very handy but you’ll also want some level of manual control and, ideally, an audio input for an external microphone.

Another YouTube vlogger, Steven Bridges, an entrepreneur and street magician from the UK, uses an iPhone, but his main camera is a Canon DLSR 550D, which shoots 1080p video and includes wide angle capability and a front facing display. The key to understanding any DLSR camera, if you’ve never used one before, is to master using the manual focus and exposure settings to make sure your shots come out clear and crisp.

When looking for a camera for your vlogging setup, you don’t need to break the bank but  there are a few features to keep in mind. A front facing display can be very handy, as mentioned above, but you’ll also want some level of manual control and, ideally, an audio input for an external microphone.

If sound is important to you — and it should be, a survey revealed good sound was more important to people than good video — you’ll want to invest in a good external microphone. One option is to attach a shotgun mic to the hot shoe of your camera to easily capture high quality sound. Lavalier mics are also a great option for recording audio, but require the extra step of attaching the mic discreetly to a piece of clothing before each shoot.

Both of the cameras used by Schmittauer and Bridges come with built-in mics, but Bridges records sound with an ZOOM H1 external recorder and syncs sound in post-production. This is a great option if your camera doesn’t have an external mic input.

Now to the topic of lighting, in many cases good ol’ trusty sunlight makes anyone look great on camera, so maybe think about staging your set up near a window or area where you can siphon some of that light for your production. Use a reflector to fill in any unwanted shadows.

However, the sun is, of course, hard to control, so for consistently and ease of setup, a set of LED lights that can attach to your camera or to their own stands can be a useful addition to your setup. LEDs are great because the stay cool and don’t draw much power, but if you can’t investing an LED kit, consider using household lights or standard worklights purchased from any hardware store. If you go the artificial lighting route, you may consider blocking out any windows and you can even leave you lights in place between shoots to ensure a consistent look from video to video.

Whatever lighting option you choose, make sure to avoid mixed lighting situations. For instance, if you are using sunlight, make sure to use only daylight balanced lights as supplements, otherwise you are going to have a tough time making the color of the light look natural in post.

When it comes to editing your production, any basic editing software should do the trick. If you are a Mac user iMovie comes equipped on most new computers, but is easily downloadable. For PC users, Window Movie Maker is pre-installed or downloadable for free. Taking it a step up from there, the are many consumer-level editing programs that should have all the capabilities you need to put together a great vlog, including Corel VideoStudio, Magix Movie Edit Pro, Cyberlink PowerDirector and more. For even more feature and profession editing options, look to Apple Final Cut Pro, Adobe Premiere Pro, Sony Vegas Pro or even Avid Media Composer.

Furthermore, it wouldn’t be a bad idea to purchase yourself some additional storage as working with video can quickly take up space. Additionally, it’s always best to store your footage on a separate drive from your system drive in order to maximize efficiency.

Ultimately you should remember that vlogging is mostly about what you say and letting people see your true personality and posting on a regular schedule. You want to produce the best video and audio you can, but don’t let a lack of equipment stop you from putting your voice out there.

Marc Johnson is a University of Chico graduate, a lover of the creative arts, and an avid photographer with an undying entrepreneurial spirit.