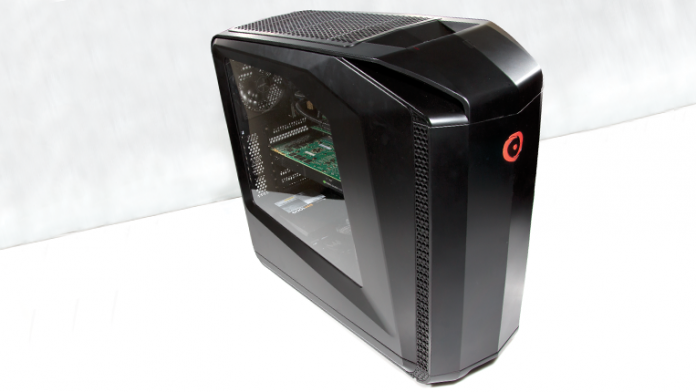 Origin Pc’s mission statement is a commitment to customization, service and performance and the monster video editing workstation they sent us definitely fit the bill. Although their workstations and gaming rigs are above average in cost to comparable products, they provide along with their PCs, free 24/7 customer service and labor for life. They will even airbrush your logo on the side of your new rig for you and if you don’t have a logo yet? They will work with you to make a custom original logo, again for free. I don’t know any other company in the market that can claim that much additional support and service, making their above average price point worth the extra cash.

The most impressive feature of the case is its ability to rotate into four different motherboard mounting positions for ample airflow in any configuration and rear or top port access.

Accommodating single or dual CPU motherboards, a range of Intel CPUs, up to 128GB DDR3 memory and four video cards, the Millennium Pro workstation and Origin’s customer service are a great buy for any videographer trying to find the right workstation for their needs. With its flashy LED configuration, simplistic front display door and aggressive design, it’s also a stylish addition to any editing bay.

The most impressive feature of the case is its ability to rotate into four different motherboard mounting positions for ample airflow in any configuration and rear or top port access. The Millennium Pro exclusive Origin designed case also features remote controlled multi-colored LEDs, 5 lockable hot swap hard drive cages, anti-theft locking side panels and four up-front USB 3.0 ports. The case itself feels sturdy at about 55lbs depending on parts and looks much more like a full sized tower than the mid-sized it is suppose to be. The Millennium version isn’t even its final form either: Users can opt to upgrade the Millennium chassis to the Genesis model (remember labor is free!). The upgrade can accommodate either 12 additional drive bays or additional liquid cooling. With this versatility and the installed hot swap drives, 9 USB 3.0 and 4 USB 2.0 ports the case is great start for a video workstation. Designed with sound in mind as well, the case also features accessible fan controls to adjust fan speeds of its installed Frostbyte 360 X2 liquid cooling system. With its standard liquid cooling and additional case fans, airflow and cooling doesn’t seem to be a concern no matter how stocked you customize your rig, overclocked or not.

Millennium custom workstations start at around $2,000, but the dual core setup we got to try out priced well over that at around $8,000.  It's not a surprise either, the two high-end Xeon E5-2660 v3 CPUs alone cost nearly $3,000. With their combined 20 cores and forty threads at 2.6-3.3GHz though, this machine is ready for any of the heaviest CPU intensive tasks. Putting our system to the test, we started small with a few tasks and ramped up until we experienced any glitching or skipping in video playback. Impressed is an understatement considering we got all the way to streaming two 4k videos, two 1080 videos, exporting 1080 video and calculating PI to the 32 millionth decibel sixteen times at once. Playback only skipped a little and the 5-minute HD export finished quickly in little more than two minutes without a hitch. Although this kind of testing is a little overkill, it proved the machine would be able to keep up with even the most extreme multi-tasker with even a little headroom. In more conventional benchmarking tests, the Millennium performed outstandingly. It came in the 88th percentile in 3DMark’s Cloud Gate software and ranked well above the other listed CPU configurations in Cinebench’s multimedia testing. The installed 8GB NVIDIA Quadro K5200 in conjunction with it’s two CPUs make this machine what it is by not only adding GPU processing power but also additional CPU computation. NVIDIA’s signature Kepler Architecture allows CPU’s to draw on the GPU for general computation on top of their graphics processing, drastically cutting CPU idle time and boosting performance.

The following results came from tests set at max difficulty.

The dual core set-up and K5200 GPU make a great fit for any demanding creative task required and even excels at doing many of them at once.

When producing video or multimedia, it's also important to make sure none of that processing power is getting bottlenecked in storage read speeds  along the way. Origin makes sure of this by offering PCIe SSDs capable of 80 Gb/s in their workstations, keeping your effective speed as high as possible. If your needs or budget require either more or less processing power however, the Millennium Pro can be outfitted with a number of other choices. Origin offers any processors from the Intel Z97 or the Intel X99 chipsets and graphics cards from NVIDIA’s Quadro, GTX, NVS and Firepro series.

Although a tech-savvy user can shave a little off the cost of a comparable workstation making and troubleshooting it for themselves, for the videographer who wants the assuredness of 24/7 support and care from a dedicated team, Origin is an excellent choice. If all of this weren’t enough to convince me personally into looking into an Origin machine in the future, hearing the Mario Bros. theme while on hold for their customer support might have done the trick.

The Millennium Pro’s power and Origin PC’s customer service is a good choice for any videographer needing a high-speed machine and reliable tech support.