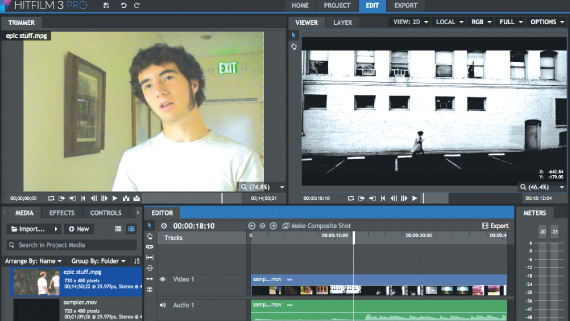 For the majority of filmmakers, a select few programs come to mind when thinking about video post-production. Final Cut Pro, Premier Pro, Avid Media Composer and Sony Vegas are among the editing giants, with programs such as Maya and After Effects filling the visual effects space. HitFilm 3 Pro is a slick all-in-one platform that brings together video editing, 3D compositing and visual effects tools and provides beginning-to-intermediate filmmakers all they need to produce a well-polished video.

HitFilm 3 Pro comes as an easy download through the HitFilm website. Installation is smooth and we had the program up and running in no time. Upon startup, users will be greeted with the home screen, which presents a range of different tutorials and help options, including links to videos, a user guide and the HitFilm forums. For anyone who is feeling trepidation going in, this wide selection of tutorials is sure to be appreciated.

When opening a new project, you are presented with the option to dive into the editor, or go right into compositing if your main focus is visual effects.

Opening the editor, we felt right at home with a familiar timeline and media bar arranged at the bottom of the screen and a project and preview window up above. HitFilm boasts an impressive array of video effects — though not as many in the audio department — and an unlimited number of video and audio tracks to work with. There are also several handy workspace options which rearrange your windows based on whether you want to focus on editing, compositing, or for a more “classic” look.

Anyone who has spent time with a major editing program will find this setup familiar. All the tools you would expect are here; slicing, ripple edits, transitions and overlays. You can add a text box, cross-fade between clips or a plethora of effects included in the program’s database. Rendering is also a pleasantly smooth process, and while editing a simple family project we found few hiccups. HitFilm did crash a couple times when we tried to export the completed 6-minute video, a strange error which corrected itself once we restarted the computer. The video, which was very basic and included no effects, exported in just under two minutes.

Where HitFilm 3 Pro really shines though is in its effects department. The composite mode is seamlessly integrated into HitFilm’s workflow, and you can easily switch between editing mode and the more detailed, layered compositing mode.

Here, HitFilm stretches its wings and shows why it is a worthy competitor to other consumer-grade post-production options on the market. Included in their selection of 180+ effects are your usual color-correctors and assorted gradients, but also many preset light and particle effects to add an immediate visual richness to your project. Want to add blood spray to your action scene? Rain to your drama? A bit of debris or a sci-fi shockwave? These are all included, and with intuitive keying, they are easy to map to a specific object or person in your scene.

HitFilm 3 Pro also supports a variety of plug-ins that work with your other favorite editors, including the usual suspects of Avid, Premier, Vegas and Final Cut.

It also boasts OpenFX compatibility, which means you can use plugins from other developers including things like the effects powerhouse Sapphire from GenArts. Also included with HitFilm 3 Pro is Mocha, a program designed for 3D camera solving. This means you can track certain areas of your scene to better integrate 3D effects into your movie.

If you’re a relative newcomer to visual effects, all of these things might seem a little overwhelming. Fortunately, there is a staggering wealth of support available for HitFilm. Right from the home screen you are presented with a scrolling selection of information and tutorials. For instance, we found a tutorial on 3D space, particle simulator information and a video tutorial on creating CG aircraft. There is a comprehensive user guide, as well as an active forum. The video tutorials — most of which are posted on HitFilm’s YouTube channel — are the most helpful since the developers give concise step-by-step instructions on just about every subject imaginable, making it easy for videographers of all skill levels to learn and create. HitFilm’s support truly stands out.

HitFilm 3 Pro runs for $299 retail, a competitive price compared with other top post-production software. For owners of previous versions of HitFilm, there are also discounted prices available — an upgrade from HitFilm 2 Ultimate runs $169, while upgrading from HitFilm 2 Express costs you $249. There is a free demo version available, which is fully featured, but which restricts exporting to 30-second YouTube clips. If you’re on the fence at all, this is a great way to get a hands-on look at the product.

With a slick, intuitive interface and an excellent support community, HitFilm 3 Pro is an appealing entry product for film-makers who are still getting their feet wet. The compositing tools work both for entry-level effects and more advanced techniques, and the way they integrate with the workflow and other editing programs is a sign of versatility that all editors should search for. HitFilm’s latest release is an impressive and worthy addition to the post-production world.

Arthur Lance is a freelance writer and student of Film and English at Butte College. He enjoys film analysis and editing, and has spent time as a camera operator for a variety of local productions, including the City of Oroville candidate’s debate.